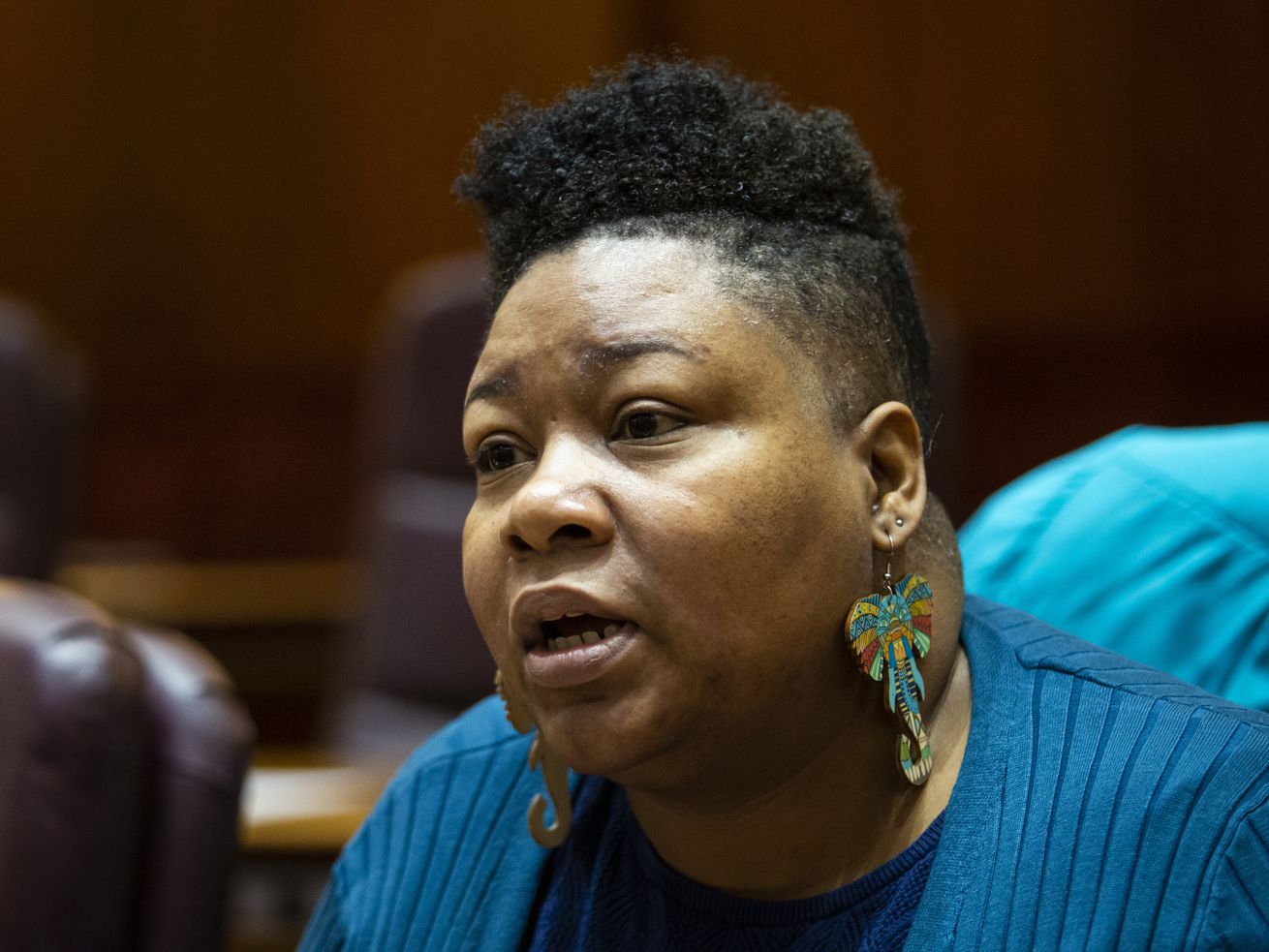 Rookie Ald. Jeanette Taylor (16th) said she was outraged by the threat and told Mayor Lightfoot that she wouldn’t stand for it.

Mayor Lori Lightfoot proved she is “no different than Daley or Rahm” by threatening to cut off Black aldermen who dare to oppose her budget, an angry alderman said Friday.

Ald. Jeanette Taylor (20th) has already gone toe-to-toe with Lightfoot in the rookie alderman’s quest to protect Woodlawn residents living around the Jackson Park site of the Obama Presidential Center.

On Veterans Day, the two strong-willed women had another confrontation — this time over the mayor’s decision to play hardball with budget opponents when it comes to choosing projects in her five-year, $3.7 billion capital plan.

Taylor said Friday she was incensed when Lightfoot warned aldermen that, if they don’t vote for her $12.8 billion budget, “Don’t ask me for s—t for the next three years.”

“She’s no better than Daley and Rahm. One of the first things she said was, ‘I’m not making deals with folks.’ … Then, you turn around and say that? That’s no different from what they did. You claim you’re different,” Taylor said.

“That’s not what you do to communities that are already disinvested in. That’s like saying, ‘Kiss the ring.’ No. I’m not doing that.”

Taylor said she told Lightfoot that she wouldn’t stand for it. “I cannot, knowing how my community is already struggling, agree to a property tax increase and layoffs. So, it’s a ‘no’ for me.”

“If that took place, that’s not an approach one should take. You want to be firm in your ideas. But you have to be a little flexible, too,” Villegas said Friday.

Villegas said the job of lining up the 26 votes for a $12.8 billion budget laden with politically unpopular choices “is already tough and this makes it tougher.”

To help wipe out a $1.2 billion shortfall caused primarily by the coronavirus, Chicago taxpayers are being asked to absorb a $94 million property tax increase followed by annual increases tied to inflation.

Lightfoot’s pandemic budget also raises taxes on gasoline, computer leases and cloud services. It includes furlough days for non-union employees, 350 layoffs for unionized employees and a $1.7 billion debt restructuring and refinancing with nearly $949 million of the savings claimed in the first two years.

The mayor has delayed the layoffs until March 1 to give Congress and, now, the incoming Biden administration more time to ride to the rescue.

A Lightfoot ally, who asked not to be named, predicted Friday that Lightfoot is at least five votes shy of the 26 votes she needs to win approval of the property tax increase.

To avoid an embarrassing defeat, the alderman said Lightfoot might be forced to delay the final City Council vote, now scheduled for Nov. 24.

“If her budget goes down, she’s toast. She might as well pack up her s—t and go,” the alderman said.

Villegas insisted there is no talk of delaying the final City Council vote.

“The mayor’s proposed budget is just that. A proposed budget. Now, we’re hearing from the members what they can and can’t support,” Villegas said. “That’s what democracy’s about. Hearing from both sides and trying to compromise and get to the middle.”