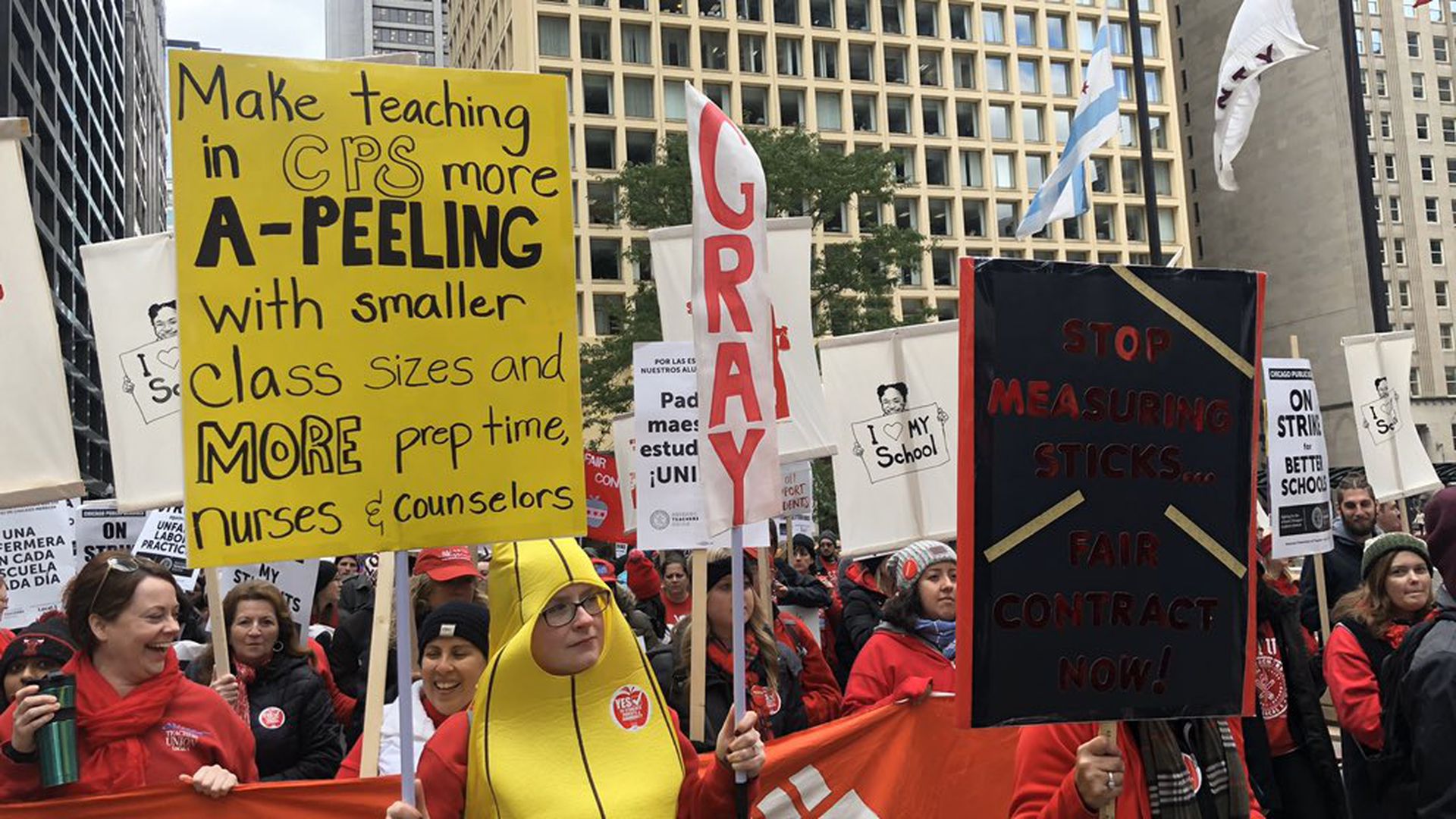 CTU members rallied in downtown Chicago on the first afternoon of their October 2019 strike. | Ariel Cheung/Chalkbeat

Chicago Public Schools isn’t required to bargain over school reopening details with its teachers union until there is a specific date for teachers and students to return to buildings, a state labor court said Thursday.

The ruling comes in response to an injunction filed by Chicago Teachers Union last month. The union accused the district of refusing to bargain over its reopening plan, and asked the state’s education labor board to delay a return to in-person school until the district begins bargaining.

With the second quarter beginning next week, and Chicago’s average number of new COVID-19 cases spiking, the hearing showed a stark divide between the two parties.

The question of when Chicago Public Schools must seek the consent of its teachers to reopen school buildings has been a point of conflict between both sides since the summer.

School officials say they intend to bring pre-kindergarten and some special education students back to school buildings sometime in the second quarter, which runs from Nov. 9 to Feb. 4. They have not yet released a return date or the results of a recent parent survey.

But on Wednesday, the district released ventilation reports that showed more than 90% of classrooms passed its inspections. Officials had pledged to make ventilation screenings a precondition of reopening.

The union, meanwhile, has doubled down on its efforts to challenge the district’s plan for returning to school in recent months, including filing multiple grievances and unfair labor practice lawsuits.

The union has argued they should be consulted about the district’s planning decisions, and that the risk for teachers who may contract COVID-19 in schools are life and death. “You have to talk before someone is exposed to the risk of death, not afterwards,” said labor attorney Stephen Yokich.

The injunction, Yokich argued Thursday at a virtual hearing with the Illinois Educational Labor Relations Board, would give the union time to bargain an agreement — and avoid a possible strike. “We can have the disputes resolved in bargaining instead of through the streets and strikes,” he said.

Labor experts make a distinction of when districts are expected to bargain with labor unions: they can formulate plans independently, but must bargain over how that plan could affect union members.

In particular, a state law that applies only to Chicago Public Schools allows the district to decide what is a “mandatory” versus “permissive” topic of bargaining.

An attorney representing the Chicago Board of Education said Thursday that matters concerning school buildings fell firmly into the space of “permissive” topics. District lawyers also faulted the union for not choosing to take part in mediation, but instead file for the injunction.

The hearing Thursday offered a look into some hurdles the district faces with its reopening plan. Some big questions, including how many parents are willing to send their children back to school, still remain.

Scott, the district’s lawyer, said CPS has not yet made a firm decision on returning to school, but only begun an exploratory phase. “No final decision has been made,” she said.

She also warned that, if the court rules in favor of the union, it will effectively put control of the reopening in union hands — and will override all other stakeholders.

But the union says the high stakes of COVID-19 have created an urgent need to include the union’s voice earlier in the process.

Union officials said they were concerned that, so far, teachers’ voices haven’t been included in the discussion in a substantive way. “I don’t think our teachers should be a blind study” on school reopening said Yokich. “They deserve a seat at the table with the other stakeholders.”

What constitutes a seat at the table is also in dispute. Both sides have been sitting down weekly, if not more often, a fact that district leaders said shows they are bargaining in good faith. But union officials say they aren’t given any substantive information at these meetings, and the district only responds to proposals on small items.

While Thursday’s ruling fell firmly on the side of the district, it does not offer the district an all-clear to reopen or a respite from future injunctions.

Labor board member Lynne Sered said the board was open to reviewing the union’s request again when there was a specific date for reopening from Chicago Public Schools.

The school board says the school district is determined to offer some in-person learning in the second quarter — and the case of school clerks may be instructive as to what that will look like.

A union labor suit on the issue of school clerks, who are currently working in school buildings, remains unresolved. While an arbitrator rules that clerks should work remotely where possible, that hasn’t happened yet.

The district attorney said Thursday they were in the process of figuring out what work clerks could do online. But the union said there had been little substantive effort made in the month since the ruling to change clerk’s working conditions.