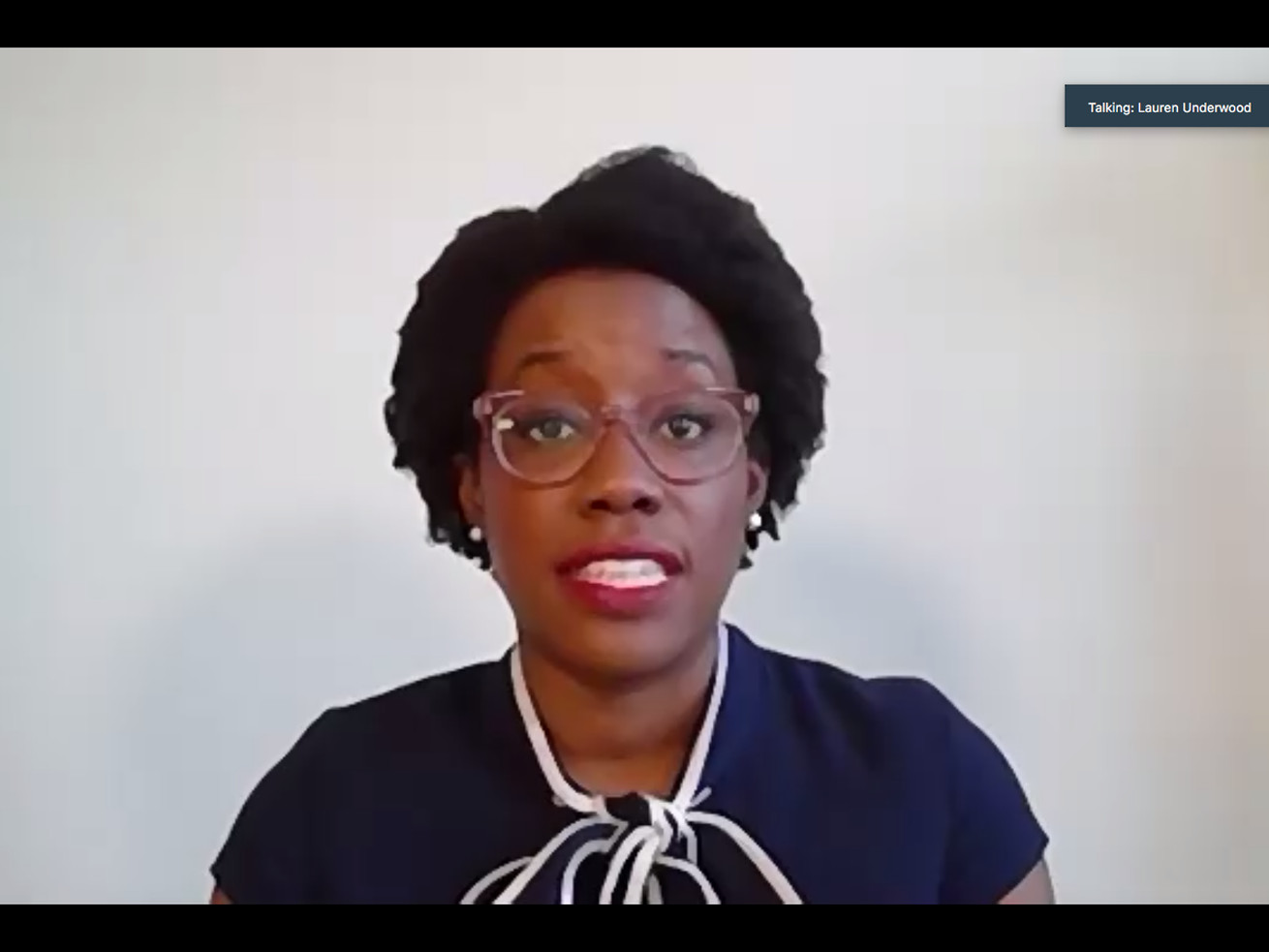 With thousands of ballots to be counted, Rep. Lauren Underwood, D-Ill., said in a Zoom briefing, “This race is not over.” | Zoom screen grab by Lynn Sweet

“This race is not over,” freshman Rep. Underwood said in a Zoom briefing with reporters Thursday.

WASHINGTON — With more than 18,000 votes not counted, Democratic freshman Rep. Lauren Underwood, locked in a battle with Republican state Sen. Jim Oberweis, said on Thursday when all the ballots are tallied, she will win.

“This race is not over until every voter has had their say,” Underwood said in a Zoom call with reporters, coming a day after Oberweis, a state senator, declared victory based on incomplete returns.

While a 2020 margin of victory for either Oberweis or Underwood may not be that decisive, Underwood has a much wider path for picking up votes than Oberweis.

The 895-vote lead Oberweis had Wednesday was down to 716 on Thursday afternoon, according to the Associated Press, which has not called a winner in the race.

Urging local officials to wrap up vote counts “as quickly and transparently as possible,” Underwood said, “Once every vote is counted, I feel confident that I’ll be reelected to represent this community in Congress.”

Oberweis seemed to take a page of President Donald Trump’s playbook: claiming a win even when all the ballots cast -— whether in-person on Election Day, by mail or an early vote — had not been counted. He said Wednesday there were only a ‘handful of outstanding ballots.”

While that gave Oberweis a shot of publicity, and a boost to the recount fundraising he’s started, it has nothing to do with the ongoing vote count.

Oberweis has a narrow lane to pull off a win, compared to Underwood.

Underwood said there are 11,000 votes to be counted in the part of McHenry County in the 14th District. Trump beat Democratic nominee Joe Biden in McHenry.

If Oberweis wins, it may be on the strength of those McHenry County voters. McHenry also sits on the Wisconsin border and its two neighbors to the north — Walworth and Kenosha Counties — also went for Trump. Trump closed out his Wisconsin campaign at at Monday night rally in Kenosha where Trump gave Oberweis a shoutout. Trump also did a tele-rally for him and endorsed Oberweis in a tweet.

While there are split ticket voters, Underwood’s path is wider because the rest of the district consists of much more Democratic political real estate: Biden overwhelmingly beat Trump in the parts of DuPage, Kane, DeKalb, Will, Kendall and Lake Counties in the 14th District.