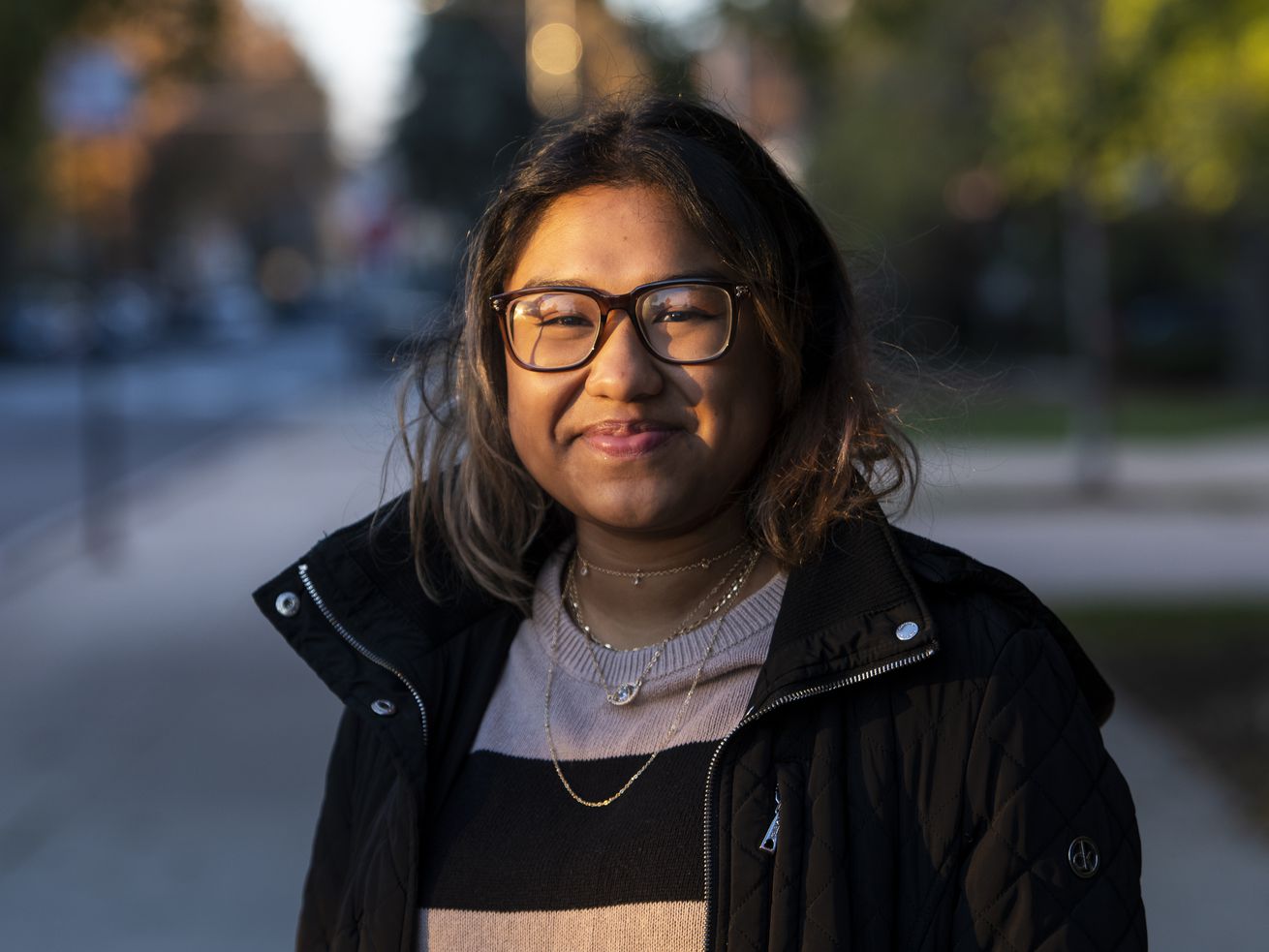 Ashley Santiago, 16, a Junior at Foreman College and Career Academy stands outside her school Friday where she is helping organize get-out-the-vote efforts for her eligible classmates. | Tyler LaRiviere/Sun-Times

Using class presentations, social media and video games, students in high school and college are educating their peers about voting ahead of Tuesday’s election.

Ashley Santiago is excited about the general election, and she’s working hard to educate her peers about voter registration and getting them enthusiastic about casting their ballot.

Come Tuesday, she also plans to serve as an election judge.

But there’s one election activity she isn’t taking part in — voting.

Santiago is 16. And while she can’t cast a ballot herself, the junior at Foreman College and Career Academy on the Northwest Side isn’t passing up this chance to make her voice heard in a different way.

“We aren’t endorsing anything, but we wanted people to open their eyes and see that it’s not about the candidates,” Santiago said. “It’s about who’s going to help the community more, and how voting is important and if you don’t vote you’re making somebody make the decision for you.

“It means a lot to me because even though I can’t vote, it feels so good to see other people get encouraged to go out and vote,” she said. “I believe that students have the power to influence elections. We have to do this for our democracy and to get our voices heard.”

Santiago and her friends made slideshow presentations explaining voting rules and procedures, which they sent to teachers to show to their students. They made flyers in both English and Spanish and emailed them to families, and have used social media to reach their peers.

“It’s very important for us to deliberately educate our young people around the importance of general elections, the importance and the impact of their votes,” Escamilla said. “If we’re able to establish this practice early on, it will become a lifelong habit for our young people. And if they start to vote early in their younger years, they’ll actually be able to see the impact of their vote through policies, ideally. So the sooner we support this, the better.”

Margie Smagacz, a social studies and civics teacher at Foreman, said she’s never seen this level of student enthusiasm for an election in her 25-year career.

Students start class every day with questions about election polls or other political news and are proud to be participating, she said. About 20 Foreman kids, including Santiago, are serving as election judges. And those who vote or serve as judges get free school gear.

“We talk about each candidate’s platform,” Smagacz said. “The DREAM Act, DACA, is extremely important to our community because we do have a large Hispanic community. We have a community of people who are undocumented. And so it’s a worry for them.

“Young people have a different viewpoint than us older folks. They see the world a little bit differently … and their voices need to be heard in this.”

Similar voting efforts have been underway at the college level, too.

Matt Buerckholtz, 22, earned a bachelor’s degree in psychology from DePaul University in August and is now in graduate school there. Over the past few months he’s led a partnership at DePaul with Gamers.Vote, a nonpartisan, not-for-profit organization that empowers online gaming communities to take part in elections. That’s been especially helpful at DePaul, where the gaming crowd has “grown exponentially” in the past year.

“Video games are one of those things where competition and communication are able to stay strong in an online world,” Buerckholtz said. “So having that platform to reach out to different students and increase awareness about making sure you go out there and get registered to vote is something that’s been not only very new and unique to the DePaul experience this year, but it also has been very effective in making sure we reach an audience that is very difficult to get to otherwise.”

The Barrington native said information about voter registration has been sprinkled in during virtual gaming tournaments and posted to an online forum where informative election conversations have picked up recently alongside the usual gaming discussions. Using those existing resources to convey an easily accessible message without being too overbearing has been key, he said.