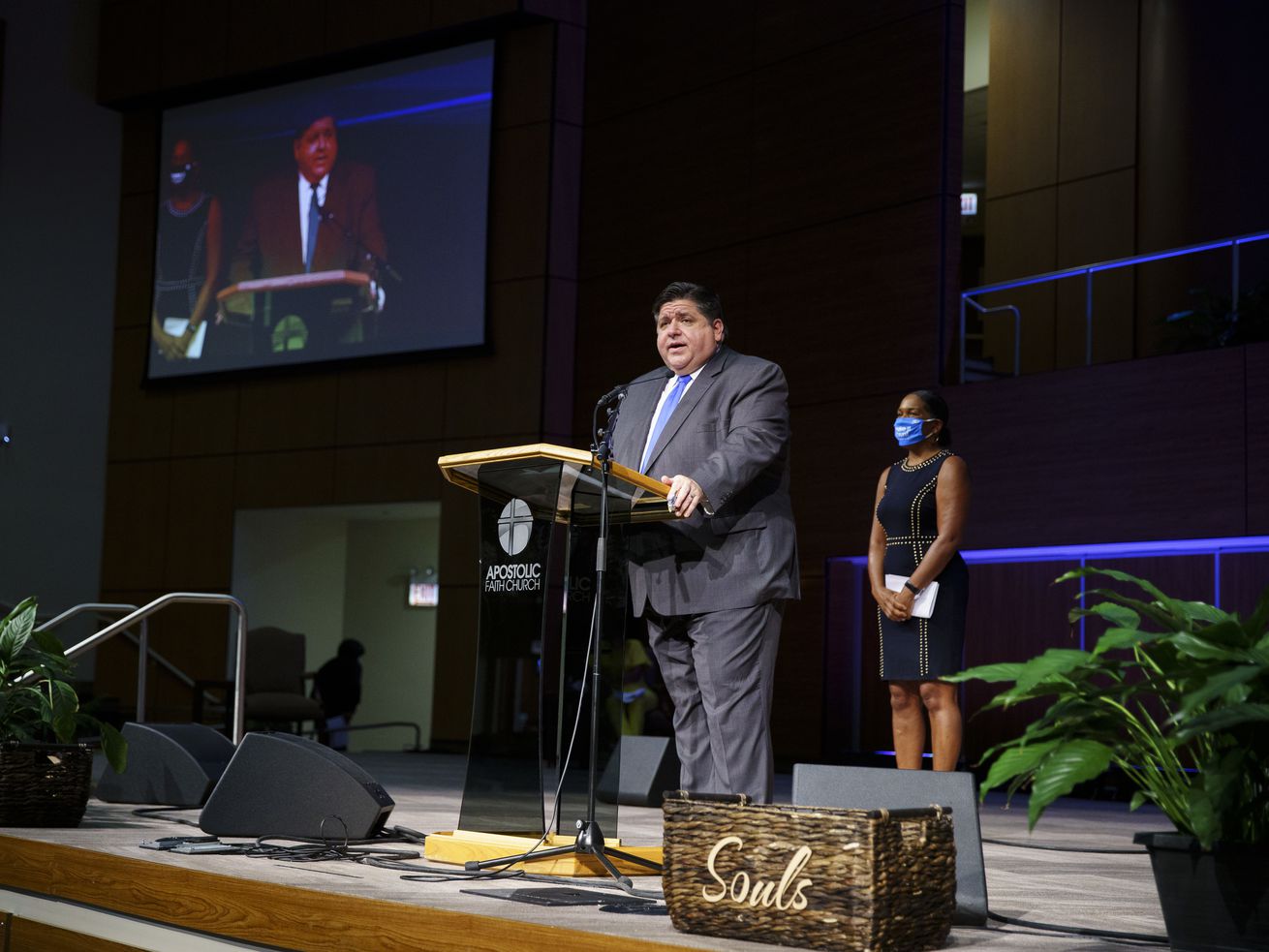 Gov. J.B. Pritzker speaks to those in attendance and those watching via a livestream about the importance of filling out the census at the Apostolic Faith Church in Bronzeville during the Census Gospel Sunday Concert in September. | Anthony Vazquez/Sun-Times file

In the past, Pritzker’s statements about Illinois’ supremacy in Census spending have at times been less ambiguous. In a Dec. 4 statement, he left little doubt he thought Illinois ranked No. 1 — a claim that has never been true.

Illinois stands to lose tens of millions in federal money over the next decade if it undercounts its citizens on the 2020 Census effort. That’s why Illinois and other states across the nation are collectively spending hundreds of millions of dollars to make sure every eligible citizen is counted.

In an Oct. 13 tweet, Gov. J.B. Pritzker suggested Illinois leads the nation in that effort.

Given that other larger states share the same incentive for an accurate count, we decided to check out the claim.

The National Conference of State Legislatures, which tracks Census spending by state, publishes data showing Illinois ranks second among states in total spending at $31.5 million, below California at $187 million. The NCSL previously had New York above Illinois as well, at $60 million, but has since revised it down to $20 million.

When asked why the governor said Illinois is “nation-leading,” his top spokeswoman, Jordan Abudayyeh, said her boss’s tweet was referring not to total spending, but to spending per citizen, or per capita.

By that measure, Illinois’ $2.40 per person in Census spending ranks third in the nation, behind New Mexico at $5.50 per person and California at $4.70 per person, based on NCSL’s state spending figures and 2019 U.S. Census population estimates.

“Illinois is in the top three of states, so we are ‘nation-leading’ in that regard,” she said.

In the past, Pritzker’s statements about Illinois’ supremacy in Census spending have at times been less ambiguous. In a Dec. 4 statement, he left little doubt he thought Illinois ranked No. 1 — a claim that has never been true.

“We have committed $29 million, as was mentioned earlier, to prepare and execute the Census,” Pritzker announced. “And that is by far, in the United States, the most on a per capita basis that’s being spent in any state.”

When the governor made that announcement, California topped the list, according to a report by The Associated Press published a week earlier on Nov. 23.

Several months later, New Mexico catapulted to the top of the per-capita spending list with an additional appropriation of $8 million.

Denice Ross, a senior fellow at the National Conference on Citizenship who worked for more data transparency on the Census, said that while the term “nation-leading” is not precise, it is fair given Illinois’ level of spending compared to almost all other states.

“‘On top of our historic and top-three among states $29 million investment’ would be technically more accurate,” Ross said. “Twitter of course makes it awkward.”

Pritzker said, “Earlier today, my administration announced an additional $1M in funding for Census outreach, on top of our historic & nation-leading $29M investment.”

While Illinois did not spend the most on Census outreach, it did rank in the top three among all other states.

MOSTLY TRUE — The statement is accurate but needs clarification or additional information.

Click here for more on the six PolitiFact ratings and how we select facts to check.

The Better Government Association runs PolitiFact Illinois, the local arm of the nationally renowned, Pulitzer Prize-winning fact-checking enterprise that rates the truthfulness of statements made by governmental leaders and politicians. BGA’s fact-checking service has teamed up weekly with the Sun-Times, in print and online. You can find all of the PolitiFact Illinois stories we’ve reported together here.