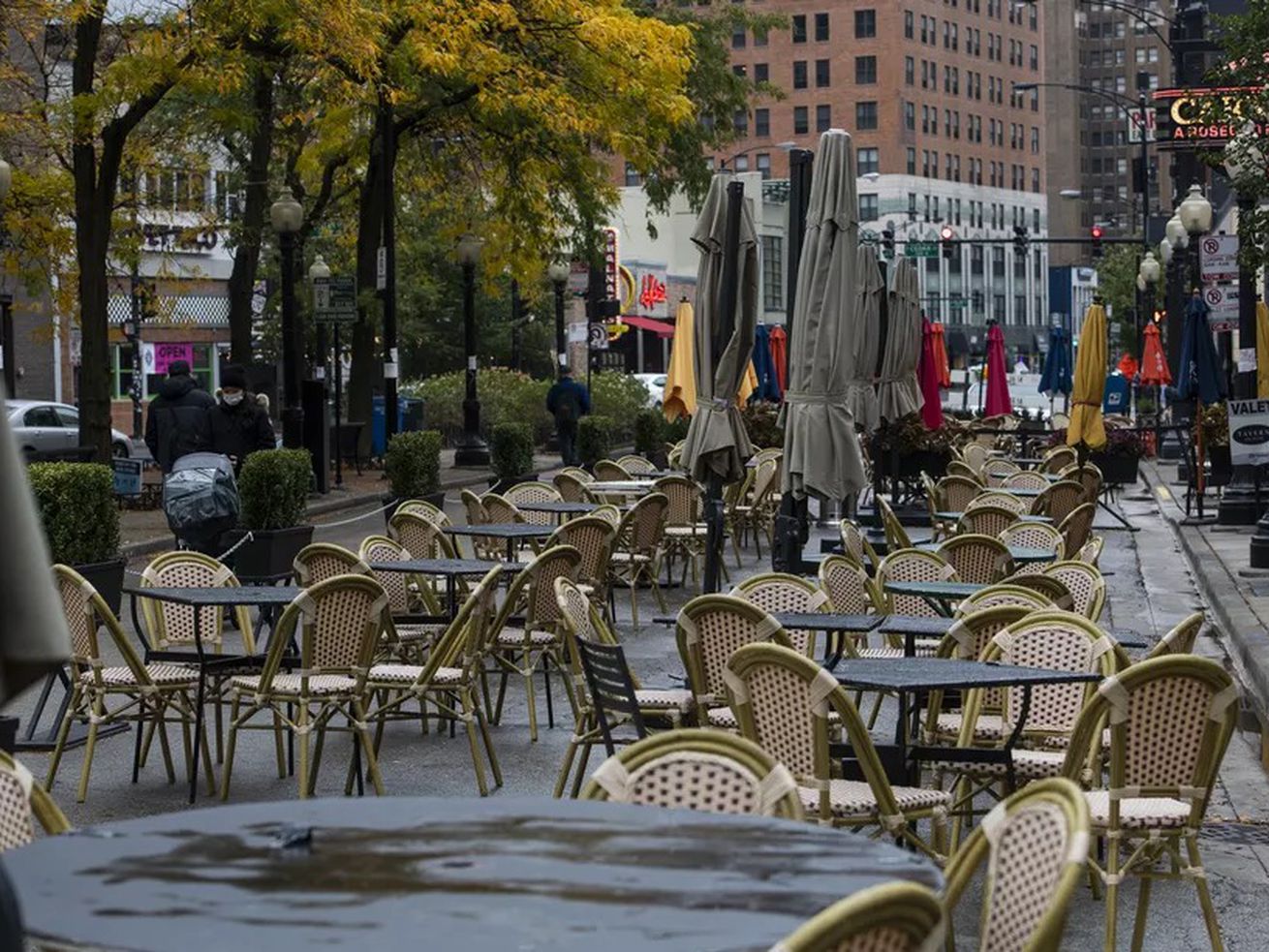 Tables sit empty outside Tavern On Rush and Carmine’s on a chilly Tuesday. | Tyler LaRiviere/Sun-Times

How would, say, DuPage County respond if Chicago was given a special pass on indoor restaurant dining? Not well.

For generations now, Chicago has had its own separate set of state laws for just about every topic under the sun. The city’s mayor is allowed to appoint the school board, Chicago has its own “working cash fund” law, the state’s mayoral veto law does not apply to the city and Chicago has a unique exemption allowing it to deduct money from worker paychecks.

From big to archaic, the list is almost endless.

So, when you’ve grown accustomed to doing it your own way for a century or so, you may start thinking you’re a special case in literally everything. And that seems to be what happened last week.

Chicago Mayor Lori Lightfoot told reporters she hoped to change Gov. J.B. Pritzker’s mind about imposing the same public health mitigations on the city as the state has imposed on several other regions, including suburban Cook County, and said the two ought to be “in lockstep” on any “new restrictions.”

The mitigations mainly involve shutting down indoor dining and booze-drinking at taverns.

The moment to address this, of course, was months ago when Pritzker laid out the new plan and the boundaries of the new public health districts. Chicago was given its own district back in mid-July (ironically, at the behest of the suburbs), but not its own rules. The city, in fact, imposed even tighter restrictions on restaurants, taverns, parks, beaches, etc. than the rest of the state, which is allowed under Pritzker plan.

But the city and the mayor have known all along that local governments cannot impose looser regulations than the state’s.

And, really, how would DuPage County respond if Chicago was given a special pass on indoor restaurant dining? Not well, I assure you. And Winnebago County denizens would be rightly upset if Chicagoans could drink inside their local taverns and they could not.

Complying with the mayor’s demands would undermine the governor everywhere else in the state. And he’s got enough of that problem as it is.

Look, we know that state mitigation works if regions stick to the program.

The Metro East area as well as the region encompassing Will and Kankakee counties both eventually worked their way out of the stricter protocols. Those successes alone should be enough to prove that the spread is slowed when indoor dining and drinking are curtailed. But coverage follows conflict, so news consumers aren’t getting that message. Instead, it’s all about disagreements between political leaders and the furious anger of the hospitality industry.

But both of those previously successful regions are now right back in mitigation. Restaurants and taverns that survived the first mitigation round are now having to go through this nightmare all over again. Businesses in first-time mitigation and those in regions about to be subjected to the limits look at their colleagues and are justly terrified for their futures.

While there’s no doubt that indoor dining, indoor tavern drinking, etc. do, indeed, spread the virus, people should be forgiven for thinking it’s unfair to put the onus completely on those specific businesses — particularly at a time when the federal government is showing absolutely zero interest in helping the businesses cope and the main complainers about Illinois’ rules (other than Lightfoot) are unwilling to vigorously demand federal action.

In order to make this more “fair” and spread out the pain instead of focusing the responsibility, everyday people would be required to do their own part.

Chicago’s contract tracing program shows that “small social gatherings” are major contributors to the spread. “(W)here we’re seeing the greatest challenges is in people’s homes, in social settings that are not public,” Lightfoot said.

But if you think people are upset about the restaurant and tavern situation, try ordering them to avoid all contact with their friends and families.

So, the choices are between ginning up either a horrible backlash with horrible economic consequences or a horrific and widespread public backlash that could conceivably jeopardize everything. Or let it all burn, and Pritzker is not going to do that.

So, “horrible” seems the only do-able choice.

And, make no mistake, without help from D.C., it will truly get horrible for a lot of very good people.