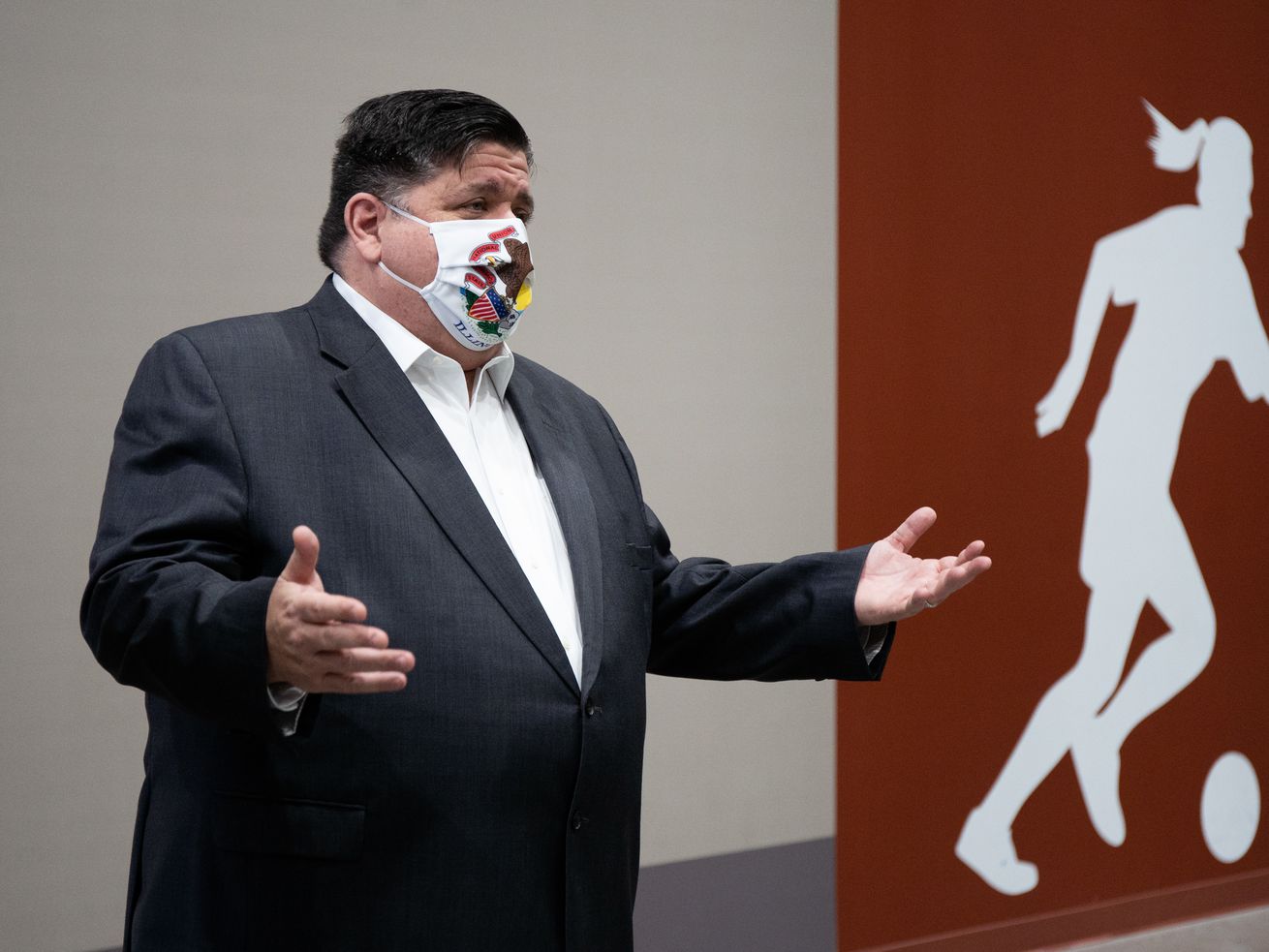 Gov. J.B. Pritzker speaks during a tour of the Pullman Community Center, which received a Business Interruption Grant, in the Pullman neighborhood on Wednesday. | Pat Nabong/Sun-Times

On Thursday Gov. J.B. Pritzker said that winter high school sports, including basketball, would be “moved into spring.” That statement comes just two days after Pritzker announced they were “on hold.”

Add another twist to this week’s winter sports saga.

On Thursday Gov. J.B. Pritzker said that winter high school sports, including basketball, would be “moved into spring.” That statement comes just two days after Pritzker announced they were “on hold.”

The Illinois High School Association countered the “on hold” statement on Wednesday by defying the governor and announcing that basketball would start as planned on Nov. 16. That move leaves the actual decision of when to play up to local school districts.

While Pritzker didn’t specify what “on hold” meant on Tuesday, most assumed a hold meant that basketball’s status would be re-evaluated during the winter and possibly started up in December, January or even February. He was more specific in a press conference on Thursday.

“We aren’t saying these sports won’t be played,” Pritzker said. “We are delaying the play of these sports. We are saying do training, do conditioning. Even the high-risk sports there are things they can do. It’s not like we are shutting the sports down. But these are all being moved into the spring with the hope that we will be seeing vaccines and treatments that will be effective.”

“The Governor did not misspeak,” Abudayyeh said in an email. “The goal has never been to cancel seasons, but to rather postpone the seasons with the hope that by the spring there will be a vaccine or effective treatment that will allow more students to report to in school in person and participate in extracurricular activities. There are currently 1.8 million students in the state who are in remote learning right now and as the Governor has said, he is focused on bringing down positivity rates in communities across the state so local school boards feel comfortable enough to bring students back into the classroom.”

The IHSA revised its sports calendar this year after football and other fall sports were delayed by Pritzker in late July. The new calendar moved several fall sports to the spring season and added a new summer season.

Football, boys soccer, girls volleyball, girls badminton, boys gymnastics and water polo are currently scheduled for the spring season. According to Pritzker’s statement today, schools may have to add boys and girls basketball and wrestling to that list.

There are many issues with overlapping football and volleyball and basketball, from gym space to forcing students to choose between sports. Those issues will certainly be on the minds of school boards and superintendents deciding whether to follow Pritzker and the Illinois Department of Public Health’s guidelines and not play basketball until spring or go with the IHSA and play as planned in the winter.

The IHSA has not responded to a request for comment.