Some things — like creating jobs in long-neglected communities — rise above political feuds.

On Wednesday, Chicago’s historic and resurgent Pullman community celebrated one of them: a $60 million Amazon “last-mile” distribution center that has created 200 jobs just in time for Christmas.

Mayor Lori Lightfoot and local Ald. Anthony Beale (9th) put aside their differences to appear together at the ceremonial opening. The 150,000-square-foot center, which transformed a long-vacant industrial site at 105th and Woodlawn, actually started operations last month.

Lightfoot laughed nervously when asked whether her presence signaled a political détente with one of her most outspoken City Council critics.

“The work that’s happened across this ward shows what happens when you have true partnership. … It doesn’t happen without everybody working together — including making sure that the mayor’s office is aligned with the vision on economic development. So I’m going wherever there’s a need. We’re gonna help wherever we can.”

For Beale, Wednesday’s ceremony was a political triumph.

The Pullman comeback started with Wal-Mart and was followed by: a Whole Foods Distribution Center lured from Indiana; a Method manufacturing plant; two indoor greenhouses by Gotham Green; Planet Fitness; S.E. Johnson; and the $20 million U.S. Bank Pullman Community Center, one of the largest indoor sports facilities in Illinois.

There’s also a Culver’s under construction, 38 units of artists’ housing already built and the Pullman National Monument, part of the National Park Service, commemorating the 1894 strike that gave birth to Chicago’s labor movement.

No wonder violent crime has dropped 35% in Pullman, defying the 50% surge in homicides and shootings elsewhere across the city.

Hours before making nice with the mayor, Beale argued all that was done either before Lightfoot became mayor or without her help.

“We can put more people on the backs of this horse. … What I would say to her today is, we have momentum. We know what we’re doing out here. We have a lot more jobs and opportunities to bring to the area. Get on board and be a partner,” Beale told the Sun-Times.

“The city is hemorrhaging. When you have certain areas that go through transition, you have to ride that transition. … Eventually, we’re gonna taper off because we’re gonna run out of land. I’m hoping we can convince her to be a partner so we can continue this resurgence.”

In late January, Beale said the Amazon project would require Lightfoot’s administration to expedite building permits and put a property tax break on a fast-track toward City Council approval.

Developers ultimately ultimately chose “the quickest way forward” — without the lucrative property tax break — to avoid the political feud and open the center in time to start delivering holiday packages.

Beale, a 20-year veteran alderman, has become a vocal Lightfoot foe since being stripped of his committee chairmanship for opposing Lightfoot’s choice of Ald. Scott Waguespack (32nd) as Finance Committee chairman.

He led the charge against Lightfoot’s executive order stripping aldermen of control over licensing and permitting in their wards and her threat to do the same for aldermanic prerogative over zoning.

After two rounds of looting, Beale tried and failed to convince the Council to declare a state of emergency that would have paved the way for a four-month stint by the Illinois National Guard. Lightfoot blocked the move and accused Beale of grandstanding.

Last month, opposition from Beale and others stalled Lightfoot’s plan to add regulatory hurdles for industrial polluters who want to set up shop near homes, schools and parks.

That day, the alderman said he was “deeply troubled” by the mayor’s ordinance in light of ”the problems” he already faced getting city planners and department heads to sign off on job-creating projects in his ward.

Wednesday, the hatchet was buried. All was forgiven — at least for an hour.

“It is another great day in the 9th Ward,” the beaming alderman said.

Pointing to a recent study by the University of Chicago’s Booth School of Business, Beale declared: “What we’re doing here in the Roseland-Pullman should be copied throughout the country.” 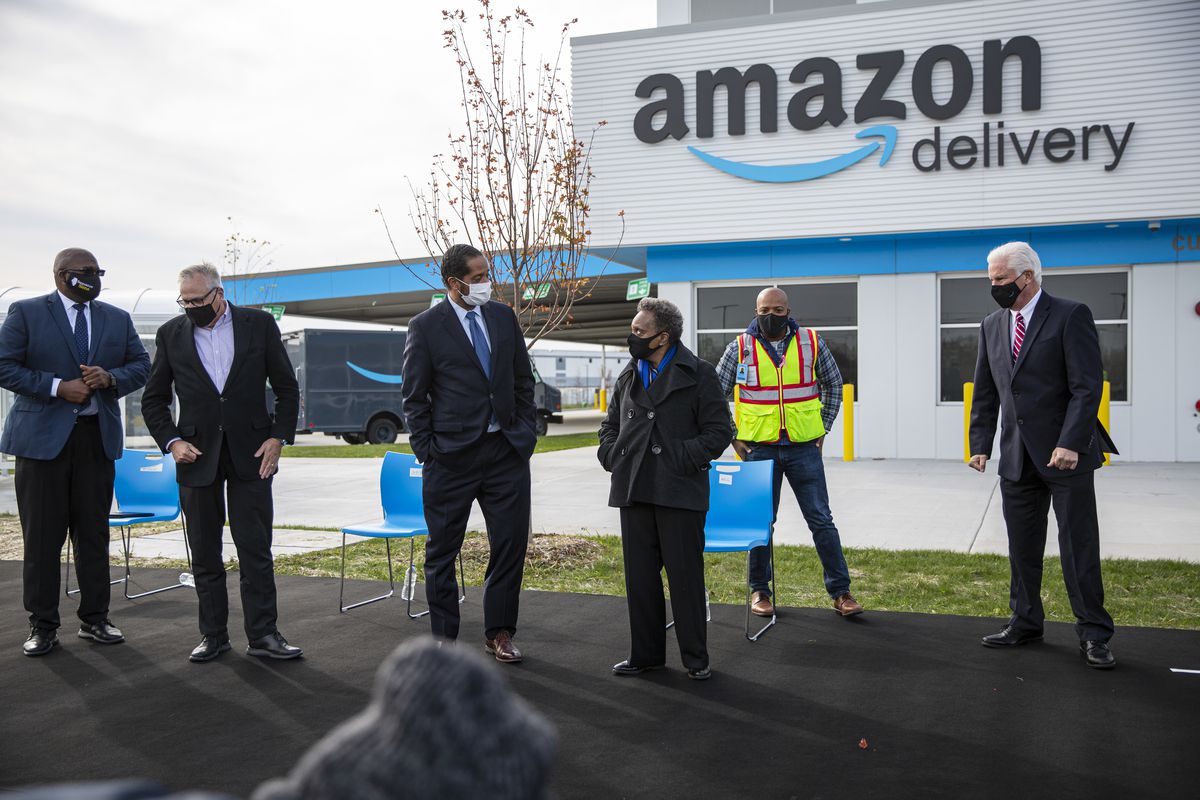 Ald. Anthony Beale (9th) (center left) and Mayor Lori Lightfoot have fought about all sorts of things since Lightfoot took office, but on Wednesday, they put that behind them for an afternoon to celebrate the opening of an Amazon facility in Beale’s ward.
Anthony Vazquez/Sun-Times