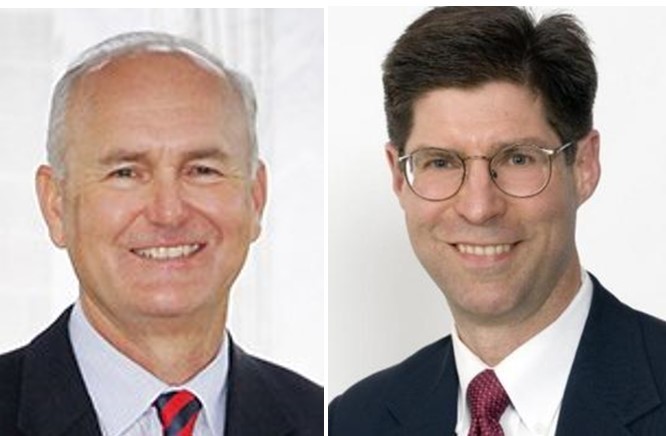 In the final days of campaign 2020, the race for Madison County chairmanship has candidates sharpening contrasts and reiterating their positions.

Democrat candidate Bob Daiber, former Madison County regional superintendent of schools, said he would call for specific cuts to the chairman’s office budget which he says would save taxpayers more than $1 million.

He wants the County Board to reduce the board chairman’s salary by 20% and eliminate the chairman’s IMRF pension benefit. He said he would forgo any county-paid health insurance benefit if elected. By doing that and eliminating positions of compliance manager and deputy county administrator that would save taxpayers $1,000,991.48 over four years, Daiber claims.

He also said he would end a practice of “giving out jobs to political allies,” such as a $95,000 per year job awarded to former MESD director Steve Adler to oversee the county’s coronavirus response.

“That individual had no experience in public health or the scientific or medical fields and his only qualification for receiving that job appears to be that he is a friend of Kurt Prenzler,” Daiber said.

Daiber also took aim at $300,000 in legal expenses from lawsuits “stemming from scandals within his administration.”

While Daiber did not specify legal actions, the county is currently being sued by former administrator Doug Hulme and former IT director Rob Dorman after the county board voted almost unanimously to terminate their employment in April.

Daiber, however, also was involved in litigation that cost Madison County taxpayers even more – $487,000 – to settle a pay discrimination-retalition lawsuit filed against him by employee Mary Parker who worked for him as superintendent.

By signing up you agree to receive email newsletters or alerts from Madison – St. Clair Record. You can unsubscribe at any time. Protected by Google ReCAPTCHA.

“Throughout my service as Regional Superintendent of Schools and as Marine Township Supervisor, I have demonstrated a commitment to fiscal responsibility, and I firmly believe that a good leader sets an example by running their own office efficiently and effectively,” Daiber said. “I understand that taxpayers work hard for their money, and I will ensure that they receive efficient and effective service while eliminating the hidden tax of corruption being paid by them as a result of Kurt Prenzler’s failed leadership.”

“Because he is retired, and receiving a $103,000 per year state pension with full health insurance, he proposes taking less as chairman,” Prenzler said. “Taxpayers are smart enough to know this is called ‘double dipping.’ If my opponent is elected, he would receive more than $200,000 per year from the government, and adding years to qualify for yet-another pension.”

Prenzler also said Daiber has worked in government for more than 40 years, “much of that time holding two government jobs at the same time.”

“He has promoted many tax increases – taxing retirement income, increasing the gas tax, an additional 1 percent sales tax, the progressive tax hike, and more,” he said.

Prenzler said he has a record of reducing costs while in public office.

“When I ran for county treasurer, I blew the whistle on former treasurer Fred Bathon’s criminal tax sales that cost taxpayers $4 million,” said Prenzler, a certified public accountant. “After being elected, I automated the tax sale mess, reducing penalty interest rates from 18 to under 4 percent, saving taxpayers millions of dollars.”

He said that within two months of becoming treasurer, he reduced office spending from $1 million to $700,000 per year.

“Three times (2011, 2017, 2018) my opponent promoted an additional 1 percent county-wide sales tax,” Prenzler said. “Three times I led the fight against this tax increase, and the voters rejected it three times. If this tax increase had passed, it would have pushed the sales tax above 10 percent in many areas of the county.”

In 2016, Prenzler said he led a group of 120 citizens who gathered 10,000 signatures to put a tax cut referendum on the ballot, which was approved by voters in a 4-1 margin.

He also said that five years ago, 10.1 percent of his property tax bill went to county government.

“As taxpayers know, the vast majority of property taxes go to public schools, municipalities,” he said. “This year, only 7.6 percent of my tax bill goes to county government. That’s a 22 percent reduction. No other taxing district in the county has lowered property taxes more.

Prenzler also said that he led the county board to put another binding tax cut referendum on the upcoming ballot, and encourages voters to say YES to reduce the maximum county general fund property tax rate from $.20 to $.18.

“The reason he’s grasping at straws on cost-cutting ideas is because he’s never done it,” Prenzler said. “I’ve done it, and if taxpayers have any questions, they should feel free to call my on my personal cell phone: 618-514-2599.”