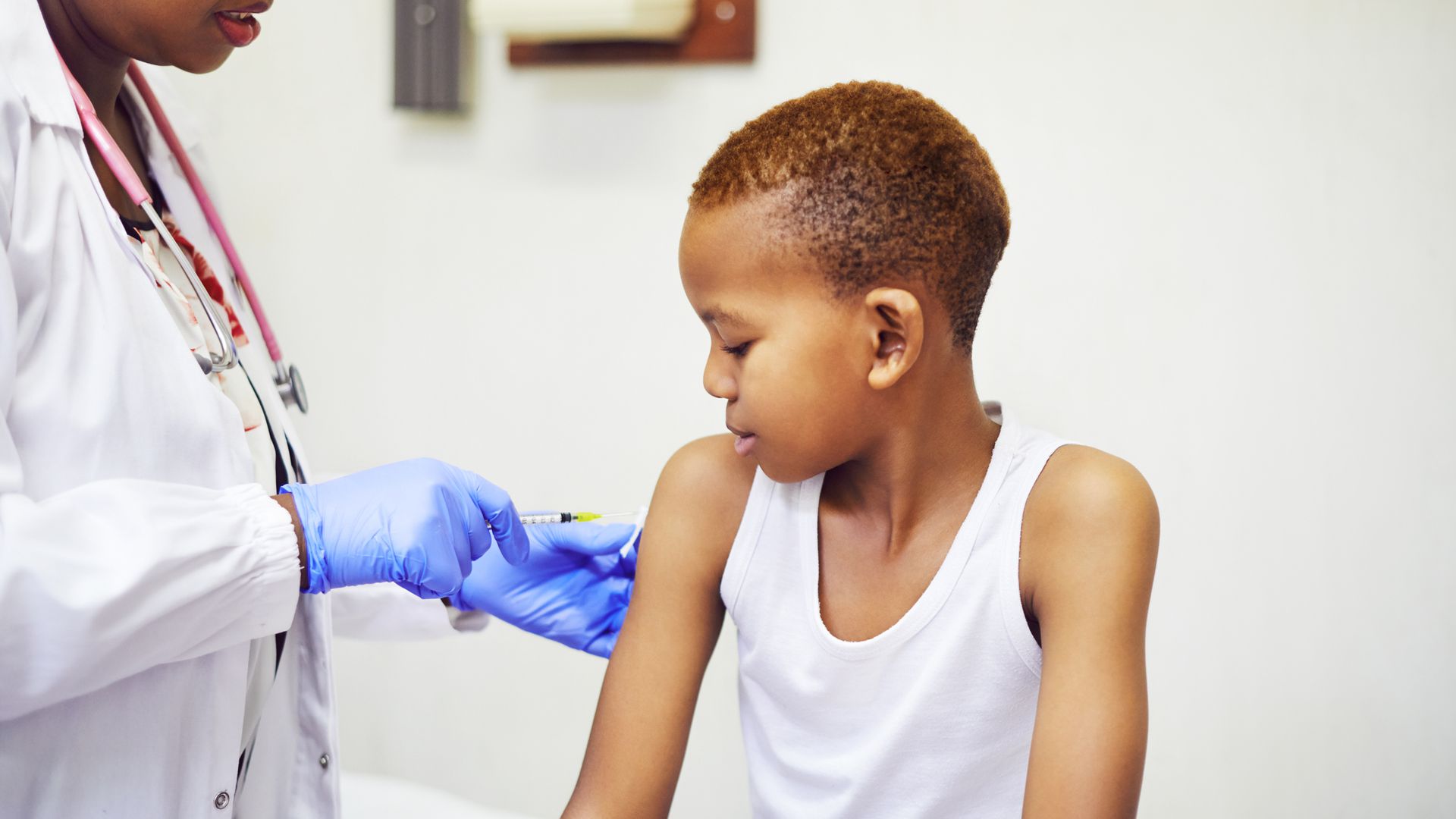 If children aren’t visiting the doctor for vaccinations, they’re also missing out on screenings for such issues as mental health problems, developmental delays, even child abuse.   | Getty Images

Growing up undocumented in a family that immigrated to Chicago from Mexico, Rosalia didn’t go to the doctor as often as her U.S.-born siblings. Her parents were afraid that even a routine visit would draw uncomfortable questions or cost more than they could afford.

“Even if the resources were out there, they didn’t feel comfortable asking out of fear. They were afraid of getting in trouble,” she said. (Chalkbeat withheld her last name to protect her identity.)

Rosalia, now a mother of two who lives on the Northwest Side, is diligent about keeping up with her daughters’ regular pediatrician visits. But she has gotten discouraged this year, after six months of calling her health clinic and being told to call back.

“At first, they said, ‘We can’t allow your children to come in because of the pandemic. I was understanding. They are great. Then I asked for an estimate for when children can go back. I couldn’t get an appointment until this week.”

There’s a constellation of reasons why Chicago’s typically high vaccination rates have started to slide among children who reside here, including access issues, fear of being exposed to COVID-19, and resurging distrust of vaccines. Current numbers are hard to come by, but data obtained by Chalkbeat offer a window: A quarter of low-income children who attend Chicago’s publicly funded child care sites are behind on critical immunizations for such serious illnesses as measles or polio. That’s a decline of 12 percentage points compared to last year.

In some neighborhoods, up to half of the children in child care are missing required vaccinations, according to an analysis of data provided by the city’s family services department through an open records request.

Left unchecked, the city’s slide in routine childhood immunizations could usher in a second health care crisis — a measles outbreak like the state confronted last year or a surge in whooping cough — and it points to troubling holes torn in the fabric of pediatric public health by the coronavirus pandemic.

Experts worry that the slip also suggests a resurgence of vaccine hesitancy in some neighborhoods that could foreshadow a bumpy road ahead for any future COVID-19 vaccine.

“I think anyone who has worked in the vaccine space has reason to be concerned,” said Dr. Marielle Fricchione, the immunization program director at the Chicago Department of Public Health and an assistant professor of pediatrics at Rush University Children’s Hospital.

With many schools closed and day care centers below capacity, Chicago’s typical enforcement mechanism — sending children home until they are in compliance — rings hollow. Last week, the state school board relaxed its own Oct. 15 deadline for proof of immunizations for e-learners, saying they may continue to attend virtual classes without penalty. “The threat of not going back to school is different. So that changes our usual incentives for families to get vaccinated on time,” Fricchione said.

If children aren’t visiting the doctor for vaccinations, they’re also missing out on screenings for such issues as mental health problems or developmental delays and warning signs for autism, lead poisoning, even child abuse, neglect, or malnutrition.

“There’s a COVID effect in relation to access to care,” said Jennie Pinkwater, the executive director of the Illinois Chapter of the American Association of Pediatrics. “We’re concerned about immunization rates, but almost to some degree that is a more solvable problem than a general lack of accessing primary care.”

In early October, the acting director of the state’s Department of Children and Family Services sent a notice to businesses and health care providers that flagged a troubling statistic — calls to report child abuse and neglect were down 57% compared to the same time last year. When school buildings closed, teachers, coaches, and other mandatory reporters lost critical sightlines into the lives of children whom they helped keep safe.

Pediatricians are now, for some children, the rare connection to the outside.

In recent years, Chicago has had higher-than-average immunization rates. The city was closing in, for example, on 95% coverage rates for the measles-mumps-rubella vaccine, according to data from the Centers for Disease Control, which tends to lag a few years.

The current picture is just starting to come into focus, and even then, existing data as of July 31 offer only a partial view. The numbers obtained by Chalkbeat show what’s happening among 12,000 children, which is a fraction of the city’s youngest residents. But they are among the city’s most vulnerable, as they qualify for public child care programs and subsidies for low income families.

Closer analysis shows variance by sites and by neighborhoods, numbers that don’t directly correlate with poverty or how many residents in the area have health insurance. A string of neighborhoods on the Southwest Side of the city — Auburn Gresham, Ashburn, Gage Park, Brighton Park — had centers report rates that were lower than the citywide average of 76%, as did Edgewater and Uptown on the city’s North Side.

“We should definitely be sounding the alarm right now,” said Carmen Vergara, the chief operations officer at Esperanza Health Centers, which operates four health care clinics on the Southwest Side of Chicago. “We’re eight months into the pandemic — that is more than 25% of the lifespan of a 2 year old.”

In neighborhoods with higher rates of COVID-19, a bus ride or a few minutes in a waiting room can feel like a gamble. “Parents are hesitant to come into the clinic — they view it as a place where they could be exposed to COVID,” Vergara said. “In general, folks feel like, well, if they are a little bit delayed, they’d rather risk that than coming in and possibly be exposed.”

While some families are concerned about exposure, others report access issues, from appointment delays to closures of free clinics. The city typically took a multi-faceted approach to immunizations: connecting hundreds of physicians with free vaccines for children who qualify, operating a mobile bus that could give vaccinations on the go, and filling in gaps with free clinics for the uninsured, underinsured, and undocumented.

But the pandemic closed those clinics for months starting in mid-March and halted the bus that traveled to schools, daycares, homeless shelters, and churches.

“We had such a strong program and such great momentum in terms of evening out barriers to access in this city,” said Fricchione, the city’s immunizations director. “It broke all of our hearts when we had to close the walk-in clinics at the peak of the pandemic.”

In August, the city restarted the van, and in September, it reopened two of the five clinics. But with many school buildings closed, day care enrollments down, and park programs and back-to-school fairs basically a pre-pandemic memory, where’s the van to park?

Months of continued delays could have consequences. “This is going to become much more important if and when the schools go back in person. Now you have kids that are mixing with other kids, and this increases the risk for kids who have not completed vaccination series to be exposed to preventable diseases,” said Dr. Tina Tan, a pediatric infectious disease specialist at Lurie Children’s Hospital of Chicago and a professor of pediatrics at the Feinberg School of Medicine at Northwestern University.

Chicago’s childhood vaccinations program typically supplies 700,000 doses of vaccines annually to 400 health care practices. It’s a herculean undertaking that sputtered in the spring as providers faced their own challenges, including supply shortages of personal protective equipment, the abrupt shift to telemedicine appointments, and reimbursement challenges that perhaps disincentivized doctors from prioritizing vaccinations.

Historically, a key ingredient of the city’s campaign around vaccinations was also enlisting grassroots groups in outreach for different neighborhoods and racial and ethnic groups. Field workers addressed questions and concerns about standard required childhood vaccinations, as well as optional immunizations, such as for the flu.

The pandemic ground some of those efforts, too, and Chicago plans to restart them. Community outreach is particularly critical now, as experts raise concerns that a decline in rates might also be connected to a general distrust of the medical establishment in the wake of COVID-19. Black Americans, in particular, have longstanding reasons to distrust the healthcare system, which stem from a painful history of discrimination and a continuing gap in care compared to white Americans. A new nationwide poll that captured pandemic era attitudes by race reveals that seven out of 10 Black Americans believe they are treated unfairly by the medical establishment; half said they would refuse a coronavirus vaccine.

“Some people of color are just more fearful now of vaccines, and in general of doctors and healthcare, especially with the way COVID-19 is being grappled with, and especially with the political rhetoric going on right now ahead of the presidential election,” said Jamal Malone, the chief executive officer of Ada S. McKinley Community Services, an umbrella agency for 14 child care sites that together enroll about 750 children.

Malone said that there are other factors to consider that might be causing a slide. Some families are just coming back to child care after months at home, and how centers take on the job of enforcing immunization requirements has changed, too. Before the pandemic, educators made a point of engaging parents in casual conversations as they dropped off and picked up children. Those conversations offered a window for gentle nudges and reminders to parents about health screenings and immunizations — or to identify families who needed help connecting to doctors’ practices or clinics. New restrictions on parents entering buildings during the pandemic have limited those critical interactions.

“Now the communication has to be more phone calls or text messaging,” Malone said. “We’re looking at different creative ways of communicating and reaching our parents.”

Fricchione agrees that on-the-ground conversations are more effective than billboards — a philosophy the city will apply to outreach around the COVID-19 vaccine, when it becomes available. “There is an institutional trauma that gets triggered by this COVID vaccination conversation. We are sensitive to those issues. Nothing replaces actual conversations with actual human beings.”

In some ways, how Chicago tackles the vaccination slide facing its youngest residents could tip the scales toward success for its adult residents, if and when a COVID-19 vaccine becomes available. Advanced trials are underway for adults now, and cities including Chicago are drafting plans for rollouts. But there are no trials yet to test safety of a comparable vaccine for children, which is another worry among the public health establishment.

“In pediatrics we have this conversation all day long about vaccine and vaccine hesitancy and there is gobs of training and information around it,” said Pinkwater, adding that the state pediatricians association has called for the Illinois Legislature to establish and fund a statewide vaccinations coalition. “If you are going to extend that conversation to adult medicine, internists aren’t trained in how to convince an adult to take a vaccine. How do we take all of these conversations we are having around measles and the flu vaccine on the children’s side and extrapolate that to our adult medicine colleagues?”

“Time is of the essence.”