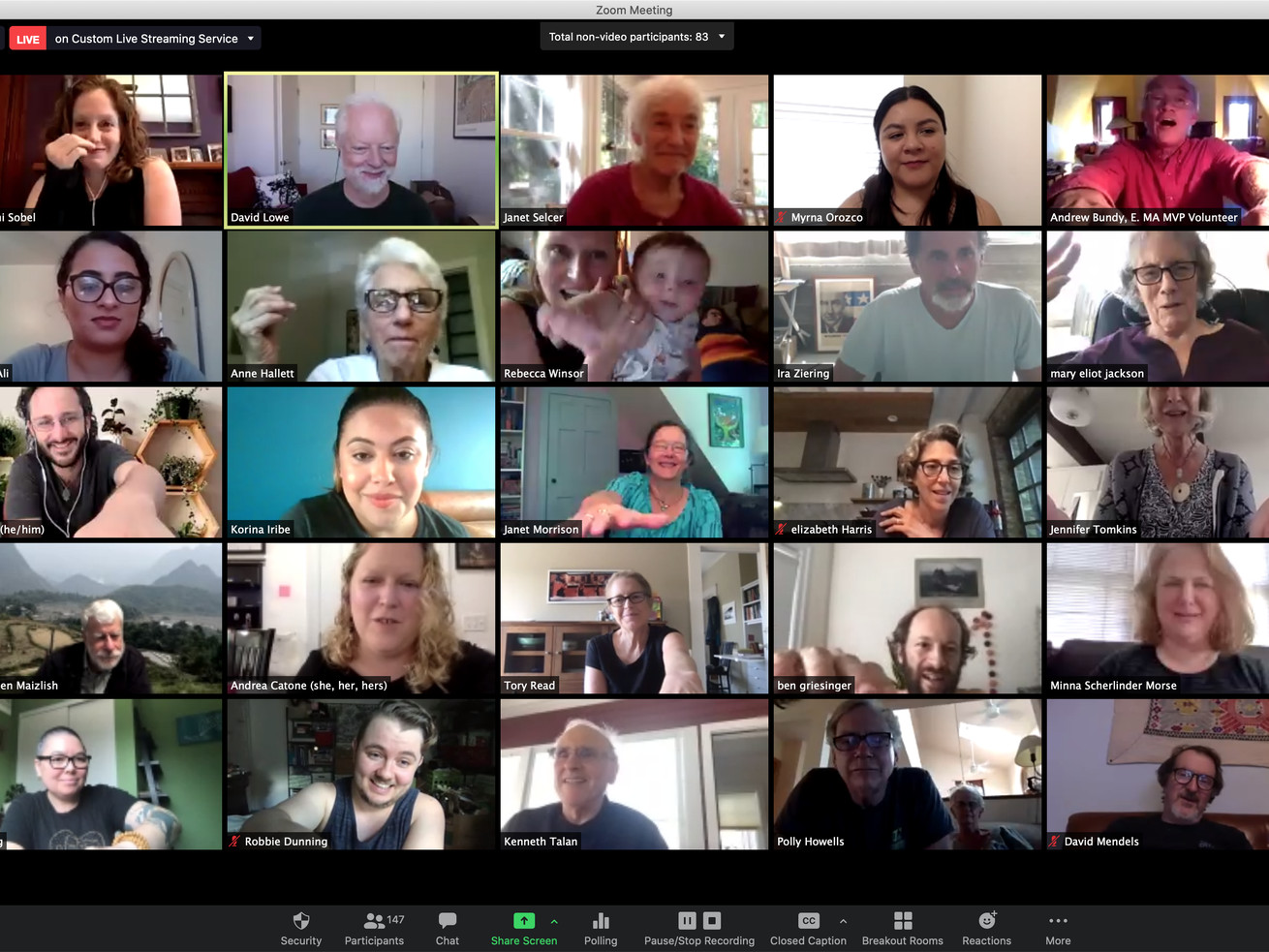 This is a screen grab of a virtual “house party” organized by the Movement Voter Project, which seeks to connect progressive donors with grassroots groups getting out the vote in battleground states. | Provided

For those who need to ‘do something’ in an election year limited by pandemic, Movement Voter Project has the ticket. And pants are optional, they joke.

During an election year pandemic, it doesn’t make much sense for politically-minded Chicagoans to travel to swing states to volunteer their services to help their favorite candidates.

Still, there’s a desire to do something.

That seems to be a big part of the success of the Movement Voter Project, which connects progressive-minded donors with local grassroots groups doing get-out-the-vote work in critical states.

In fact, the organization’s philosophy is that it always makes more sense to support the people who are already on the ground doing day-to-day organizing work than to parachute outsiders into an unfamiliar place for a few weeks on behalf of a political campaign.

That’s what attracted Sequane Lawrence to the Movement Voter Project.

Lawrence, 62, of the West Chesterfield neighborhood, said he and his wife made the trip to Wisconsin in 2008 to volunteer on behalf of Barack Obama’s campaign.

This year he’s following the Movement Voter Project’s guidance to raise money for designated community organizations in Wisconsin that can turn out that vote more efficiently than he ever could — and will still be around to advocate for those communities in the future.

Lawrence said he attended a meeting at which the project was pitched by Susan S. Pritzker, a lower-profile member of the philanthropic family, who is helping underwrite the effort’s overhead costs.

“I fell in love with it,” said Lawrence, who found the group’s philosophy a perfect fit for his interest in racial and social justice, as well as politics.

Lawrence organized a small event with his friends that raised about $10,000 for Milwaukee-based BLOC (Black Leaders Organizing Communities.)

That was in the pre-pandemic days. Since then, the organization does all of its fundraising online, mainly through “virtual house parties” in which would-be activists gather their networks of family, friends and like-minded associates on Zoom calls to make their pitch.

Lawrence said he’s planning to hold another event to raise funds for the group’s efforts to fight voter suppression and defend the vote.

Rebecca Williams, an experienced Chicago political operative, said she has helped facilitate dozens of such house parties this year as Midwest organizer for the Movement Voter Project.

“A lot of folks are like, ‘I just needed to do something, and this is what made sense,’” she said.

Williams said it has proven to be an amazingly popular and efficient way to raise money, with the virtual parties raising anywhere from $5,000 to hundreds of thousands of dollars.

“You get so much out of it for just a small amount of effort,” said Williams, who has managed the election campaigns of Cook County State’s Attorney Kim Foxx, Assessor Fritz Kaegi and state Rep. Will Guzzardi.

For a normal political fundraising event, someone has to clean their home and arrange food and drink, she noted. For a virtual party, the host “barely has to wear pants,” joked Williams.

Instead of relying on in-town guests, the virtual parties attract participants from across the country and from diverse backgrounds and ages, she said.

Priscilla Kersten, 65, of Chicago, said she and her husband saw the Movement Voter Project as a way to “get behind communities of color” in the aftermath of George Floyd’s death.

“To me this makes so much more sense. The organizers are already working with these community people to solve their problems,” Kersten said. “This whole concept really spoke to me. Your money goes a lot further in supporting community groups that get out the vote.”

The Kerstens, who have their own family foundation, organized a virtual house party with a few hundred people and raised about $250,000. Since then, their friends have organized events of their own, bringing the total closer to $500,000, she estimated.

“I think people were really hungry for a way to engage,” Kersten said.

Donors can choose to donate directly to one of the chosen community organizations, selected on the basis of their track record of electoral and social policy work, or to the project’s Big 5 Battleground Fund, which promises to move the money where its most needed with a particular emphasis on Wisconsin, Michigan, Arizona, Pennsylvania and Florida.

“These groups are well-positioned to turn out a non-traditional voter,” Williams said.

By that, she means voters who are under 35, Black, LatinX, Asian or Native American.

The get-out-the-vote work is non-partisan by design, but it’s clear the effort is designed to benefit Democrats.

“We don’t have to direct them on who to be supporting and what to do,” Williams said.

“I want another president,” he said.