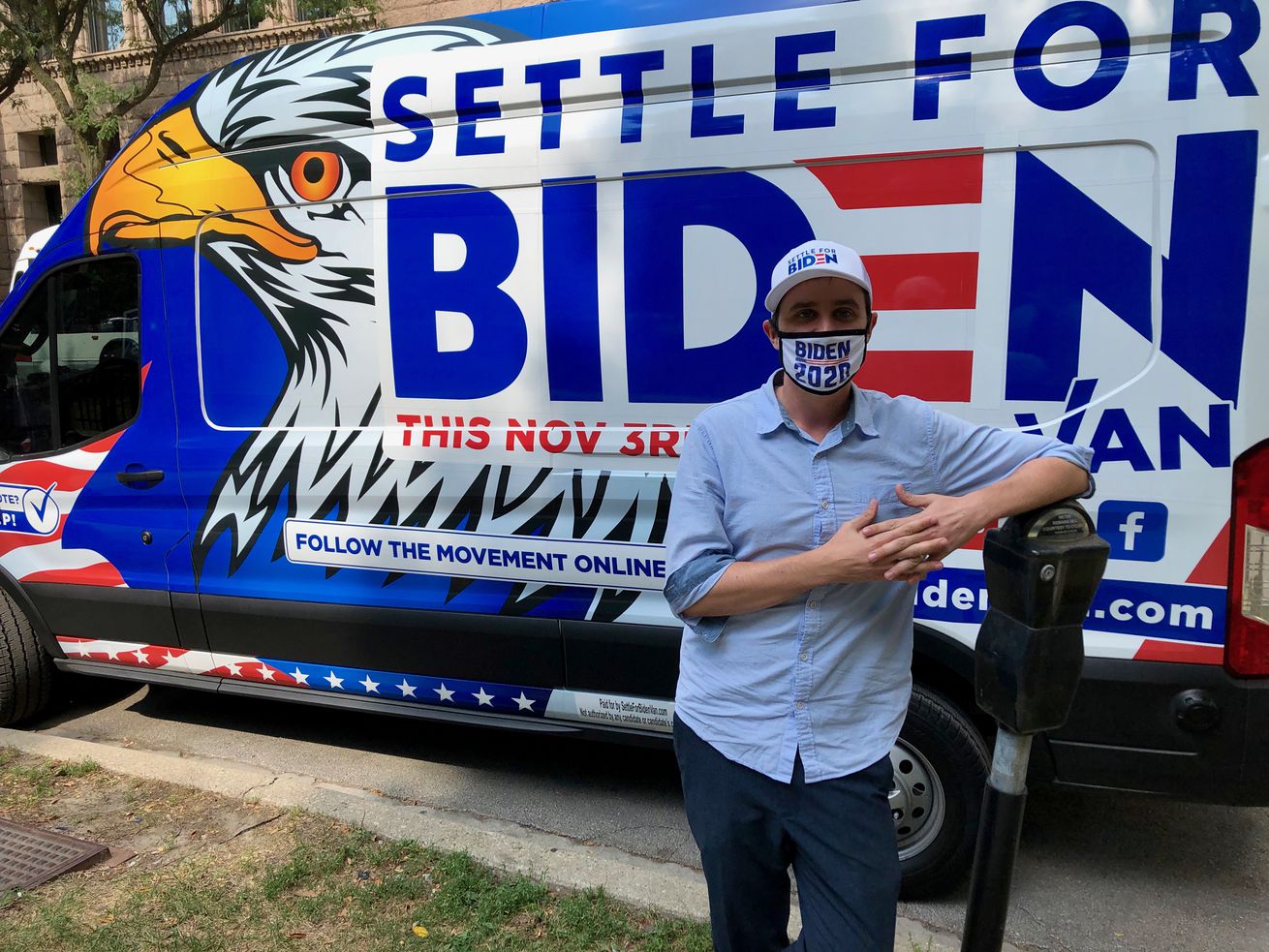 Chris Madden, a Minnesota teacher, had a van emblazoned with “Settle for Biden” and is driving across the country, trying to reach young potential voters. The paint job cost $5,000. | Photograph by Neil Steinberg

A Chicago teen’s ‘Settle for Biden’ group is trying to convince young people to vote Democratic.

Sam Weinberg had to do something.

He had returned last spring after 18 months abroad and found himself in the teeth of a pandemic. Instead of getting ready for his freshman year at college, the Chicago teen was watching disaster tighten its grip on our nation.

Meanwhile, his friends looked at the upcoming presidential election and shrugged. What does it matter who wins?

“I was seeing lots of people in my personal social circles and online saying things like, ‘Joe Biden and Donald Trump are two side of the same coin,’” said Weinberg, 19. “That really incensed me on a personal level and on a policy level.”

Rather than despair, Weinberg acted, using his generation’s irreverent view as a starting point, calling the group he started “Settle for Biden.”

“The name is reflective about begrudging support,” Weinberg said. “Yeah, he’s not our first choice. But he’s our only choice, and we have to live with him. Joe Biden is not the progressive ideal. But he’s a step in the right direction.”

Chris Madden also had to do something.

The Minnesota teacher heard about Settle for Biden and took a dramatic step. He took a 2020 Ford van and spent $5,000 to wrap it in a mural touting the organization. Then he began to drive across the country.

He arrived in Chicago Friday.

“I got this idea about six weeks ago,” Madden said. “I followed the Democratic primaries very closely. There were five other candidates I would have preferred to be the nominee. I checked out, and then I saw this message, ‘Settle for Biden.’ It’s an organization of college kids, about 200,000 members on Instagram right now and growing. I asked them if I could put the message on a van. I wanted my voice to be heard.”

I met Madden accidentally, as he parked the van next to Washington Square Park. I expected he would then go into the park and talk to people. I can be very old school. What he did was start to make a video.

“This campaign cycle is going to be the most digital one in American history,” Weinberg said. “Partially because of the pandemic, partially because that’s where we are.”

It isn’t that talking to individuals is a waste of time, exactly.

“Knocking on a door takes five minutes to reach one or two people,” he said. “We can put together a post in five minutes that ends up reaching 200,000 people.”

I pointed out that I discovered Settle for Biden by seeing a van.

Madden spent most of last week traveling across Wisconsin.

“We can’t pretend he’s the perfect candidate, but he will do a better job than the current president,” said Madden, 34. “We need to be real. ‘Settling’ fits my emotions perfectly.”

Madden plans to leave for Washington, D.C., Monday. I wondered how many vans Settle for Biden has criss-crossing the country.

“We don’t have anyone else driving around the country in a van,” Weinberg said. “He reached out to us a couple months ago, basically said, ‘I love your message. I want to put it on my van and drive around the country. We were like, ‘OK, that’s weird, but that’s great.’”

And no, they have not heard from the Biden campaign.

“Radio silence,” Weinberg aIS. “I would imagine the Biden campaign thinks about us the same way we think about Biden: ‘Eh, OK.’ They’ll take the support, even though its not the perfect messaging. People don’t like being lied to. People don’t like seeing Joe Biden presented as something he is not. People don’t want to be told that he’s Bernie Sanders 2.0. What he is is he’s right for this moment. Even though he’s subpar in other ways.”

“There’s not much excitement around him,” Madden said. “I’m trying to say, ‘There are good things about Biden.’”

“He’s got his heart in the right place and uses language appropriate for a leader. He’s a uniter who cares about all Americans rather than just certain Americans.”

Talking to Weinberg, I began to suspect there might be more than just grudging support. Could he possibly be developing an admiration for Biden?