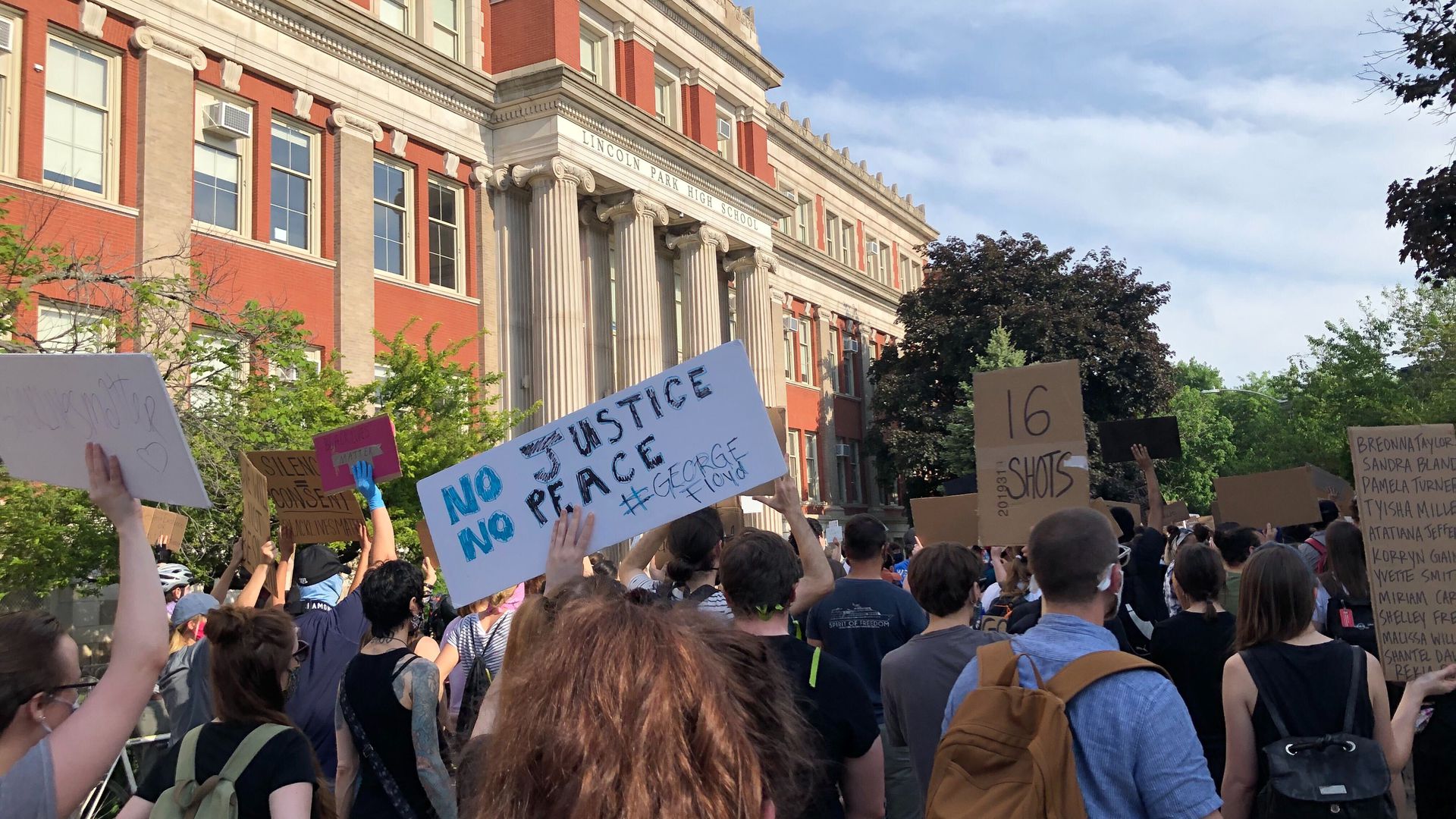 Once again, a justice system declined to bring charges against police officers in the killing of a Black American. Once again, demonstrators took to the streets to protest. Once again, a sense of hopelessness hung over communities.

And once again, as one Tennessee educator told us on Thursday, school staff must still “get up and teach and act as if none of yesterday happened.”

Throughout this tumultuous year, Chalkbeat has sought to lift up the voices of students and educators as the nation has reckoned with police violence, justice, and racism in America.

We have turned our website over to students, asked teachers how they’ve facilitated tough conversations and supported their students experiencing trauma, and documented how this moment has led to meaningful change about what and how students are taught.

After a Kentucky grand jury this week chose not to charge any police officers with killing Breonna Taylor in her Louisville apartment, Chalkbeat asked students and educators across the country to reflect. We returned to people we’d heard from earlier this year, to see how they are processing the Taylor decision after a summer of tragedy and activism.

We wanted to understand how educators interacted with their students — now back in class trying to navigate all the difficulties of pandemic education — and how they planned to keep issues of racial justice in the public consciousness.

Here are their reflections, in their own words.

We did not do our [English Language Arts] lesson this morning. Instead, we talked about who Breonna Taylor was, what her dreams were, and why people are out in the streets protesting. We learned about the origins and goals of the Black Lives Matter movement. My 8-year old students told me what they knew about police brutality and the murdering of Black people. They expressed their sense of outrage at the injustice and explained that it needs to stop. They didn’t know about the grand jury decision, but they definitely knew what racism is.

As their teacher, I had to walk the line between informing and overwhelming. It’s not always possible to end on a positive note when discussing something deeply tragic and unjust, but it’s always appropriate to affirm the intrinsic value of human life. With that in mind, we spent the morning exploring our identities with an emphasis on how our values and beliefs inform our decisions.

My students, like so many, are disappointed, angry, upset, fearful, and saddened. But my school has always done well in acknowledging the emotional weight of racism on our children while also creating opportunities for activism. We will continue to find ways to resist and uplift Black voices, whether in the streets, in school or at home. We are waiting for America to be the country we want it to be. We write, we share, we dialogue, we protest, we pray, we hope, we wait, and we always try again.

It boils down to, just, why? Breonna Taylor was sleeping. As a young black man, it hurts because my future is unknown. I have so many things that I want to do. But it can all be shut down in the blink of an eye … Last time I checked there’s no law against sleeping. We’re looking at the news and looking at what’s going on and asking, “Am I going to be next? Am I going to be the next hashtag, the next shirt, the next protest chant?”

My heart is heavy. What happened to Ms. Taylor could have happened anywhere. I educated brown-skin children who don’t understand and all they do understand is that she was in her home and her life was taken. This scares them and as an educator it is my duty to make sure my brown-skin babies know and understand that it is all our duty to protect and stand for what is right for all injustices. As an educator how does this affect my teaching — my scholars see and hear people who look just like them dying. This is trauma on top of trauma for them: to watch, learn, and witness those who look like them die at an alarming rate says to my babies, “we are disposable.” It is my duty and divine purpose to educate my brown-skin babies and those who are our counterparts that we are not disposable, but that we are intelligent, educated, strong, beautiful kings and queens who bring just as much value to this world as the next.

As a district, we affirm that Black lives matter and encourage our school communities to continue having constructive conversations. Whether instruction is in person or virtual, our schools must be spaces where our children can have honest and productive conversations about racial injustice and our role in fighting systemic racism. The Say Their Names toolkit that we released in June has resources to support students and help us all engage in restorative, anti-racist modes of thinking. I hope that we can take the next few days to check in on each other — especially our students — and be understanding about how the news might be affecting them emotionally. It is yet another reminder that our children are growing up in an imperfect world, and we all have a role to play in making it safer, more just, and equitable for all.

I was a chant leader on the 77th anniversary of the March on Washington because I saw that no one else was doing it. And I just started screaming, “Say her name.” And everyone said Breonna Taylor. All the people were marching, we were from all over America and lived very different lives, but we were all together, thousands of people, trying to get justice for her. But then yesterday I saw so many videos of protesters getting run over by a car and arrested violently. One of the women the police pinned to the ground was two months pregnant. I was just so devastated at the lack of humanity. Our way of coming together, or grieving her death, was taken away from us. It feels like the end of the world because I know that Black people in this country are not seen as human. And as a South Asian I am realizing all the oppression I have faced stems from that. I am still crying. I do not know when, or if, I will feel better. I have planned so many marches throughout the city and I want to scream.

I always encourage my students to interact with our democracy by asking questions, searching for truth, and being critical of our institutions and systems in order to continuously improve our society. Every year we do a unit on the U.S. justice system in which I ask students to explore what justice means to them and whether or not they see that reflected in our society. In the wake of cases like George Floyd, Elijah McClain, and Breonna Taylor, I know that unit is more important than ever. As a teacher of color, teaching students of color, I want them to know that their lives matter. My goal has always been for my students to leave my class with the confidence to express their opinions and an ability to form a strong argument. My course teaches argument and rhetoric, but the enduring and underlying understanding is providing the tools students need to be the change they want to see.

Honestly, I feel scared because Black women live in a world where they’re not even protected by Black men. I feel as if it is hard growing up as a Black woman, even around Black women. We are disrespected by each other, we’re disrespected by Black men, we’re disrespected by white men and women. I mean it’s like it’s not safe for Black women because we’re not even protected by our own people. I heard about [the grand jury decision] through social media. It made me feel mad because it’s stupid for them to even question the officers being charged, like they went into somebody’s house and killed them. I feel if it was a white woman, they would have charged them, this would have been over all of it wouldn’t have been a discussion. They should have been charged with that.

As a parent and educator, I feel a sense of paralysis and distrust in America’s racist, one-sided legal and justice systems for Black people. Black lives in America, for centuries, have been a superficial spectacle feeding racists’ appetites for death and pain. That’s how I feel.

I’m feeling just very strongly about their decision. I’m really mad. I’m very disappointed. I’m sad and I feel like there’s nothing in this entire world that makes sense why she does not get justice but somehow other people do. It does not make sense to me … I definitely will start going to more marches and stuff like that. I truly want to say something. Because mentally I’ve been judging a lot of people. I’ve been judging the president. I’ve been judging the judges themselves. I have been judging the people who actually made these decisions. Right now this just really is so unfair and unjust. Also considering that other people in the Black community have faced this injustice, and still they have not gotten justice … it’s just so hurtful.