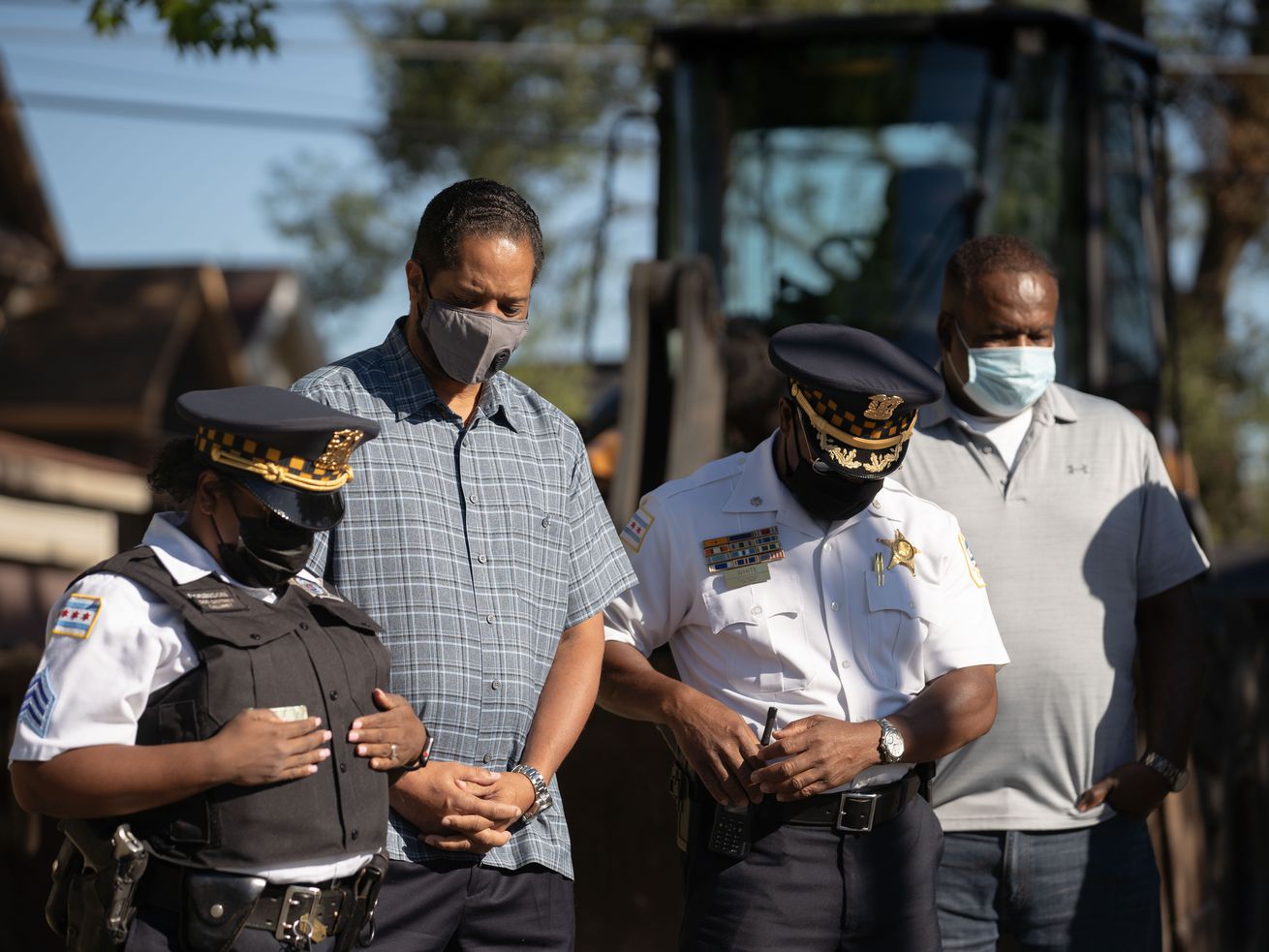 Ald. Anthony Beale (9th) (left center) has worked to open a Community Oriented Policing House in Roseland for over a year and a half, and believes the mayor is stopping it from happening. | Sun-Times File

A Community Oriented Policing House, a proposal for developing a residential home in Roseland to double as a base for officers and residents, has failed to get off the ground for over a year now despite the private funding.

A new community policing initiative in the Roseland neighborhood has been in limbo for over a year, and the local alderman says Mayor Lori Lightfoot is playing politics with the project.

Ald. Anthony Beale (9th) said top cops are all on board with the pilot program but he’s been told he can’t move forward without a green light from Mayor Lori Lightfoot.

“I’ve been working on this for almost two years with the mayor’s office and I can’t get anywhere,” Beale said. “It isn’t being approved because it’s all political and it’s me, my idea. I think it’s personal.”

Beale said a couple large corporations in his ward have worked with him to bring a Community Oriented Policing House to the area. The companies would pay to buy, renovate and furnish the home. Beale can’t identify the companies yet.

The mayor’s office rejects Beale’s assertion it is holding up the COP House.

Under the proposal, the home would double as a base for police officers and a community center where residents could access social services.

A house was under contract when the proposal was first made, but that deal fell through during the long wait for approval. Just this year, Beale said, five shootings and three deaths occurred on the block where that property is located, though he wouldn’t say where that is.

Beale doesn’t believe the Chicago Police Department is to blame for the delay. He said he has met with the 5th District commander, former police Supt. Eddie Johnson, former interim Supt. Charlie Beck and police Supt. David Brown. All three liked it, but he was told nothing could be done without Lightfoot’s approval.

A CPD spokeswoman couldn’t comment, because the proposal remains under review.

As for Lightfoot, a mayoral spokesman replied: “As stated previously to the alderman, this proposal is not a mayor’s office decision but one for the Chicago Police Department, which is why the Department is currently reviewing the proposal.”

Beale said the COP House was inspired by an effort in Racine, Wis. That city’s police department launched it in 1996; there now are six houses, which have reduced crime by as much as 70% in some areas.

Nearby cities like Rockford and Elgin have taken it a step further, recruiting officers to live temporarily in troubled neighborhoods rent-free.

“Right now the city doesn’t have a plan and we are here presenting an innovative idea that will cost the taxpayer no money but no one is taking it seriously,” Beale said. “The city has no other plan than throwing more overtime at the crime problem, which is just creating more problems and hasn’t worked.”

Chicago was one of the first U.S. cities to implement community policing — CAPS. the Chicago Alternative Policing Strategy, started in 1993.

In 2004, The American Prospect reported CAPS might be the “nation’s best hope for reforming law enforcement policy.” Many criminal justice experts believe it bridges the divide between police and residents, though money for the program began shrinking over time.

The CAPS office inside the 5th District staton would be moved to the COP House. Certain officers will spend time on the block getting to know the community, helping residents repair their homes or taking part in neighborhood clean-up events.

Once crime subsides, Beale said, they could sell the newly renovated house to a low-income family, then open a new one.

“I want kids to grow up and not see the police as adversarial. I want our kids to see them as friends and people they can rely on,” Beale said. “This is a huge starting point.”

Sharon Fairley, head of the former Independent Police Review Authority, said community policing is vital for improving the perception of police. She said the COP House has shown “success in other places and should be considered and tried here in Chicago.”

“The one concern here in Chicago with having a COP House is that many neighborhoods already feel as if they are over-policed and there are concerns that having additional police in the area may feel oppressive,” Fairley said. “So it is important to get the community involved and ask how this can be an effective tool.”

Diane Latiker runs Kids Off the Block, a Roseland-based nonprofit focused on youth violence prevention. She welcomes anything that helps build trust with the police.

“To me, police only arrive when there is an issue or during a traumatic event,” Latiker said. “It would go a long way if [police] were actually in the community actively getting to know residents.”

Manny Ramos is a corps member in Report for America, a not-for-profit journalism program that aims to bolster Sun-Times coverage of issues affecting Chicago’s South and West sides.