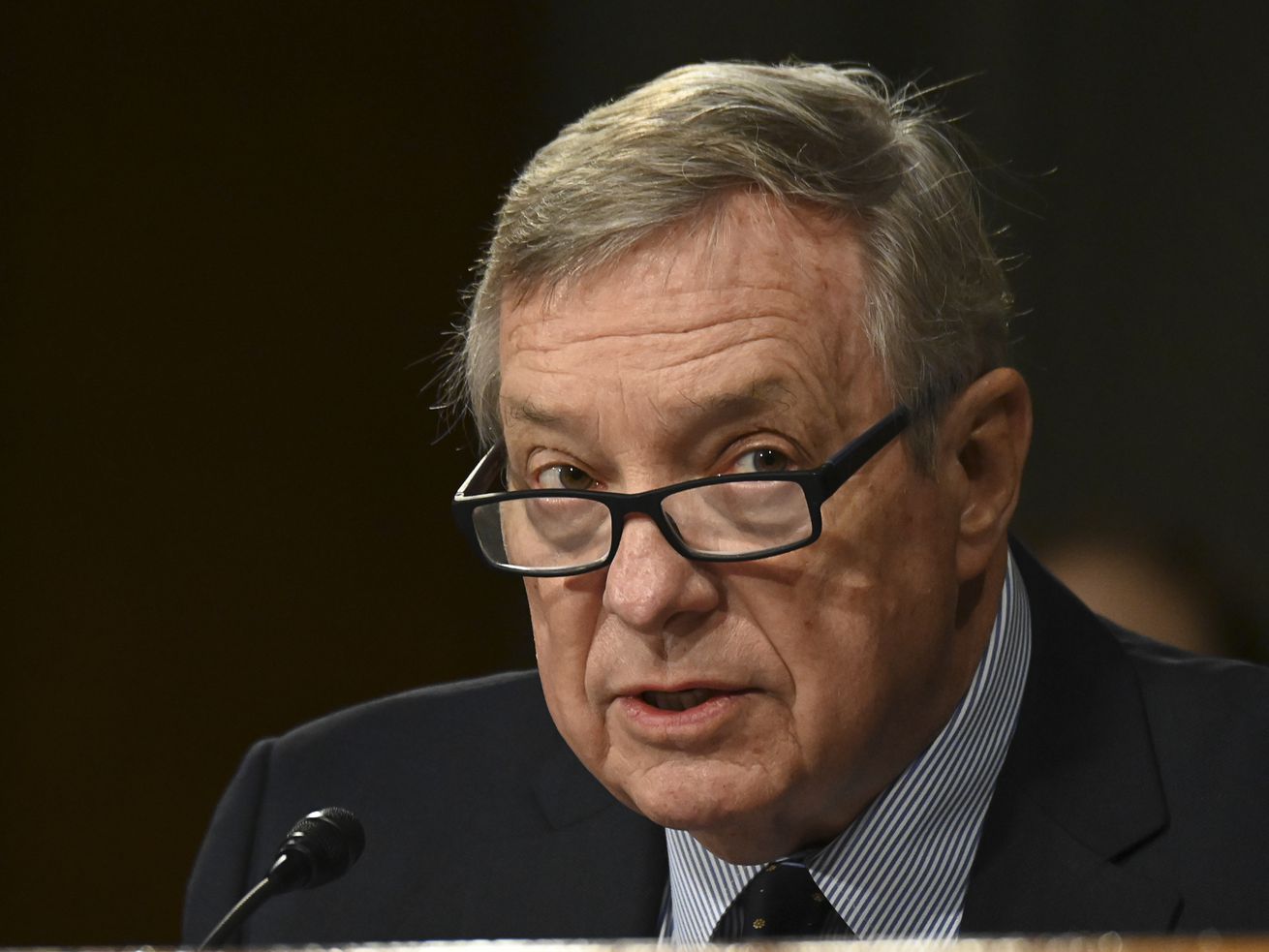 U.S. Sen. Dick Durbin is endorsed for re-election by the Sun-Times. | Erin Scott/pool via AP

Durbin, the Senate Democratic whip, will be a powerful player in Washington if voters sweep out the Senate’s failed Republican majority. For similar reasons, we have endorsed only Democrats for Congress in this election cycle.

Dick Durbin has come a long way from his hometown of East St. Louis, where he worked for $3.65 an hour in a meatpacking plant to get through college.

Durbin is the second highest ranking Democrat in the U.S. Senate, the minority whip. He is sure to play a central role in guiding the future of our nation — on everything from health care to foreign relations — no matter which party controls the Senate or the White House next year.

First elected to the Senate in 1996, Durbin is an unapologetic liberal Democrat. He seems not to have forgotten the blue-collar folks he grew up with. He has long championed higher wages and benefits for working people, better health care for all Americans, a financial boost for single and working parents — such as a break on the costs of child care — and criminal justice reforms. He is personally opposed to abortion but insists today — he didn’t always feel this way — that it’s a woman right to make that choice.

Respect for the process

At the same time, Durbin has demonstrated a great respect for the legislative process — how the sausage is made — that we believe will be essential to one day softening the political extremism in Washington.

Just this month, Durbin voted to confirm President Trump’s nomination of two anti-abortion judges to the federal bench in Illinois, Stephen McGlynn and David Dugan. He did so in keeping with a longstanding understanding that the party of the president selects three out of four district court vacancies and the opposition party selects the fourth.

That infuriated many of Durbin’s usual allies, but we appreciate a senator who lives in the real world.

Durbin is hands-down the most politically experienced and qualified candidate in a field of five in this race, and for that reason alone we offer him our endorsement. But we freely admit we’d be hard pressed to endorse anybody but a Democrat for the Senate right now, given the spineless failure of the Senate’s Republican majority to brave the wrath of Trump and hold him and his administration accountable.

Senate Majority Leader Mitch McConnell and his Republican caucus have failed the country. They have missed the historic moment. They have stood to the side as the worst president in modern times has failed to act responsibly on the pandemic, on climate change, on protecting the environment, on the humane treatment of undocumented immigrants and on a host of other issues.

They have been mealy mouth as Trump has trashed our democratic institutions — the CIA, the FBI, the EPA, the military, the electoral process and the courts — as well as federal scientists, decorated soldiers, career diplomats, a disabled man and anybody else who dares to cross him.

The sooner the Senate’s Republican majority is voted out, the better. Maybe then our nation can finally mount a serious, coordinated and fact-based response to COVID-19, climate change, Russian intrusion in our elections and other threats. And maybe then the Republican Party can begin the hard work of rediscovering its soul.

Earlier this week, in part for the same reason, we endorsed only Democrats in 12 local congressional races.

Our choices among Republican candidates were often second-best, to be candid, given the way the ruling Democrats in Springfield have gerrymandered so many Chicago-area congressional districts to favor their party. Few top-tier Republicans saw a point in making a run.

But as we settled on our endorsements, there was also this consideration: Now is no time to mess with the Democrats’ majority in the House. It has been our nation’s best check against the worst of Trump.

Durbin is opposed this time around by Republican Mark C. Curran, Jr., the sheriff of Lake County from 2006 to 2018. We endorsed Curran, who strikes us as a man who thinks for himself, in the GOP primary. Durbin also is opposed by independent candidate Willie Wilson, the self-made Chicago businessman and philanthropist who has run for office three times before.

We urge a vote for Durbin and a new Democratic majority in the Senate.