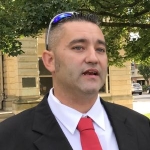 Illinois House candidate Travis Breeden says being against a bill isn’t the same thing as being against everything in the bill. He says someone recently sent a mailer that claims he’s against providing money for health care. Breeden says that’s a lie.

The Utica Republican says the funding was in a severely unbalanced budget bill.

Breeden is running against incumbent Ottawa Democrat Lance Yednock. We’ve asked his campaign about the mailer. A spokesman did not have an immediate reply but is arranging for Yednock to talk with WCMY News.

Breeden says he would make health insurance more competitive by letting people buy it across state lines and letting small business owners work together in purchasing pools to get good rates.