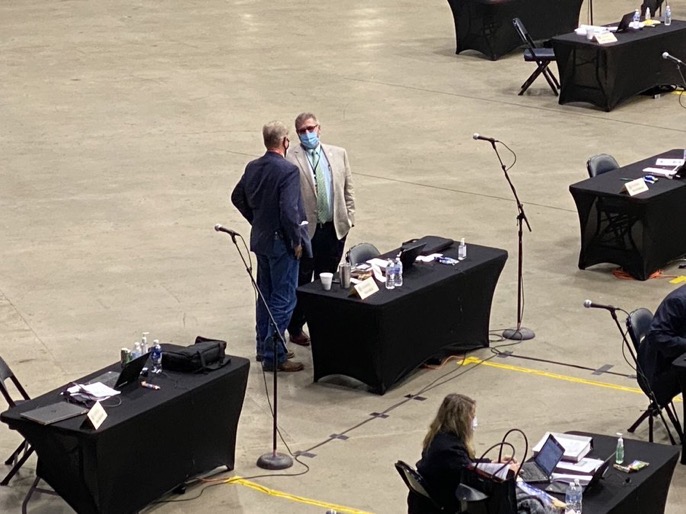 Illinois Rep. Darren Bailey wore a face covering Thursday, one day after he was removed from the state legislature for refusing to comply with a rule requiring all lawmakers to wear masks during the special session.

Bailey was seen covering his face with a blue mask for the second day of proceedings.

The State House voted overwhelmingly to adopt the rule Wednesday. After Bailey refused to put on a mask, the House voted 81-27 to remove him from the chamber.

Several House Republicans voted in favor of removing Bailey from the proceedings.

“We cannot ignore nor compromise the health and safety of every member in the General Assembly, their family members, and every one of our staffers who work tirelessly for us,” House Republican Leader Jim Durkin said.

Bailey later told press gathered outside of the session that he had also refused to take a coronavirus test prior to the session beginning. Lawmakers were asked to take a test, but it was not required, according to multiple reports.

"Taking into account the shared concerns of House members, I am proposing we move to adopt changes to the House rules that require members, staff and the public to wear masks, submit to temperature checks prior to entering the building each day and observe social distancing guidelines outlined by public health experts while inside the Bank of Springfield Center," Madigan said in a statement, adding that members will vote to adopt the rules immediately upon convening Wednesday.

Under the rule, any lawmaker declining to wear a mask could be removed from the chamber by a vote of legislators, and that is precisely what happened to Bailey.

A spokesman for Madigan said that the vote to remove a member from the chamber would be a temporary removal, not an expulsion from office, that would last until the lawmaker complies with the rules.

Illinois Gov. J.B. Pritzker now recommends residents wear masks if they must go outside during the stay-at-home order. Here is an easy no-sew face mask with items you probably already have at home.

Other members of the legislature had also threatened not to wear masks, including Rep. Chris Miller, a Republican from Oakland, who said Tuesday that he tested negative for the virus but walked back his earlier resistance.

"If we are required. I will play along," Miller said. "I don’t want to be a distraction from the real issues of JB’s Failed [sic] leadership."

Rep. Brad Halbrook, a Republican from Shelbyville, conceded that he too would wear a mask if required.

"If the rule is adopted I will abide by it," Halbrook said. "I trust that we will spend as much time on the long overdue issues of spending reform, pension reform, property tax and many other needed reforms."

A second Illinois lawmaker has filed a lawsuit against Gov. J.B. Pritzker over his stay-at-home order issued to slow the spread of the deadly coronavirus. NBC 5’s Charlie Wojciechowski reports.

Bailey has been a frequent critic of coronavirus-related restrictions. The downstate lawmaker had previously sued Gov. J.B. Pritzker in April, claiming the governor exceeded his authority in issuing an extended stay-at-home order

When asked during his daily briefing on Monday, Pritzker addressed the reports of lawmakers who did not want to wear masks during session.

"I hear that there are people that are planning to show up in Springfield in the legislature not wearing a mask. Think about what that says, right? Because a mask isn’t designed to protect you. It’s designed to protect the people you’re with," he said, calling the decision to not wear a face covering "callous disregard for people’s health."

"Most of the legislators that I talked to understand that it is necessary, it is something that is, again, it’s keeping the other people that you’re with safe," Pritzker later added.