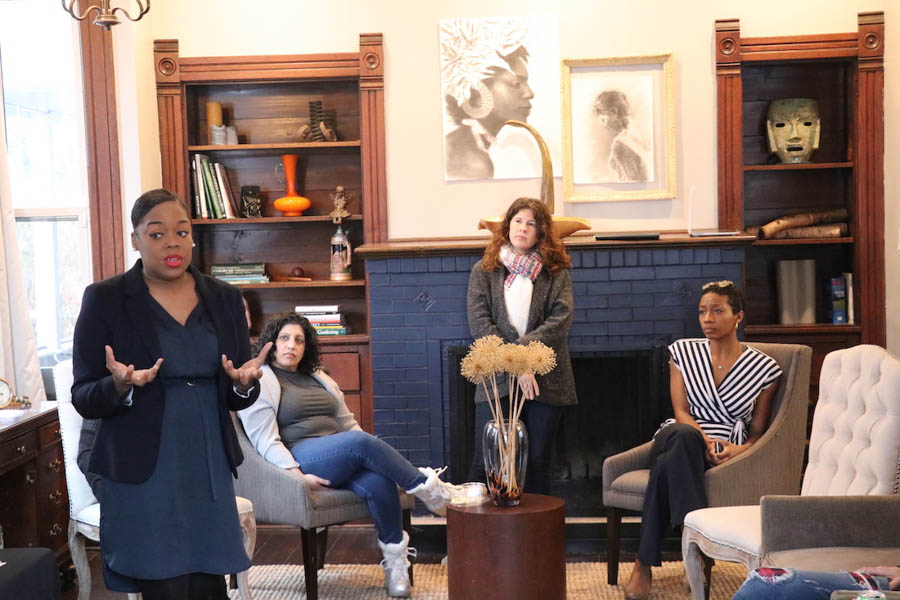 Kina Collins wears a black shirt with white block letters spelling out the names of the four congresswomen known as The Squad. She greets the owner of L!VE Café in Oak Park with a hug before taking a seat at the table in the back corner. “Give credit where credit is due,” she said. “They have carved out their space and done it, and they’ve changed the fabric of American politics.”

At 29, Collins is the youngest black woman to ever run for congress in Illinois. The Austin native is one of three Democratic candidates challenging 12-term Rep. Danny Davis in Illinois’ 7th Congressional District, which stretches from Oak Park and Westchester on the West Side to swaths on the South Side and through downtown Chicago, making it one of the state’s most diverse districts.

Like Squad members Ayanna Pressley and Alexandria Ocasio-Cortez in 2018, Collins is a young woman of color running against a longtime incumbent. And, like Pressley, she is running against a progressive Democrat who votes along similar ideological lines. But in her mind, the climate is right for another woman of color to upset an established career politician.

Collins’ young political career formed in the wake of the Laquan McDonald shooting, when Chicago police officer Jason Van Dyke killed the unarmed 17-year-old. She was in Baton Rouge, Louisiana, attending Louisiana State University at the time, but left in 2015 after a court ordered the release of the McDonald police dashcam video.

“You have a bunch of 17- to 24-year-olds who are like, ‘Wait, why did the police officer have a gun and not a Taser?’ That wiped all the naivety out of my mind, and that’s when we realized, the protesters of Laquan McDonald, that the action and the things we were doing couldn’t just be on the front lines,” she said. “We needed to be in the policy rooms.”

Collins learned about gun violence at age 7. While playing outside with her family on a hot summer day, she saw a boy fatally shot in the street. Since then, she has worked in Chicago and Washington, D.C., fighting for gun legislation.

In 2017, while working as a paid staffer on J.B. Pritzker’s gubernatorial campaign, Collins received an email that would shape her young political career. A black senior staffer called her—it was urgent. Did you read the email? She hadn’t.

The Pritzker campaign allowed an atmosphere of “sexism and racism,” she said. In front of senior staffers, Collins said, a regional organizing director made an “extremely sexually harassing comment” toward her. No one intervened.

Gov. Pritzker’s office did not respond to emails and phone calls for comment.

Collins left the campaign and posted the news of her departure in a Facebook post she thought “would only get a couple of likes by family and friends.” In the post, she talked about standing up for the principles of her community and against the “problematic fabrics of politics” in Illinois.

“I couldn’t stand by a candidate who thinks this way about black people,” she said. “I know my power in the community, and they trust me because this is the community I grew up in, and we’ve got to tell people the truth.”

Before long, ABC trucks and camera crews crowded the street in front of her parent’s house in the Austin neighborhood, all looking for Collins.

“Now these newspapers and like everybody was calling me, and I was like, ‘what the f—,’ ABC7 showed up to my house, [reporter] Craig Wall was at my front door,” said Collins. “But I was afraid because [Pritzker] is a billionaire.”

After leaving the Pritzker campaign, Collins was hired immediately by Sameena Mustafa, who at the time was running against Rep. Mike Quigley of Illinois’ 5th congressional district in 2018. Mustafa lost to Quigley, receiving only 24% of the vote. But for Collins, it stoked the fires of ambition, driving her toward a run for elected office.

“I went to Springfield after that to pass a bill and everyone knew who I was, the other gubernatorial candidates knew who I was, and it was a level of respect immediately, which I didn’t get before when I was just kind of playing the role,” she said.

It’s a longshot bid to upset an incumbent with money and name recognition. Davis served as an alderman and Cook County commissioner and then, in 1997, became a congressman. His campaign has $300,000 on hand compared to Collins’ $20,000, according to a fourth quarter report by the Center for Responsive Politics. The two other challengers, lawyer Kristine Schanbacher and teacher Anthony Clark, have $70,000 and $20,000 on hand, respectively.

Davis declined to comment on Collins or the election. “We just have to wait and see on election day what happens,” said Tumia Romero,  Davis’ communication director.

Collins is 49 years younger than Davis, a disparity she isn’t afraid to emphasize. “I just think that congressman Davis is running out of gas and energy, he’s the same age as my grandfather and my grandfather has been retired for about 10 years,” Collins said.

If Collins were to pull off the upset, it would seem like out of nowhere, the lesser known challenger upsetting the established politician. But this story has been written before, in 2018 when challengers like AOC and Pressley won shock victories. And like those campaigns, it would rely on small donations and grassroots efforts.

“We have shattered the binary of what it means to run a real grassroots campaign,” Collins said. “At this point, we’re door knocking, phone banking, canvassing — got the texting game — just annoying everybody to show them we’re here.”

Photo at top: Collins addresses a group of voters at an open house in Oak Park. (Brandon Raphael Dupre/MEDILL)