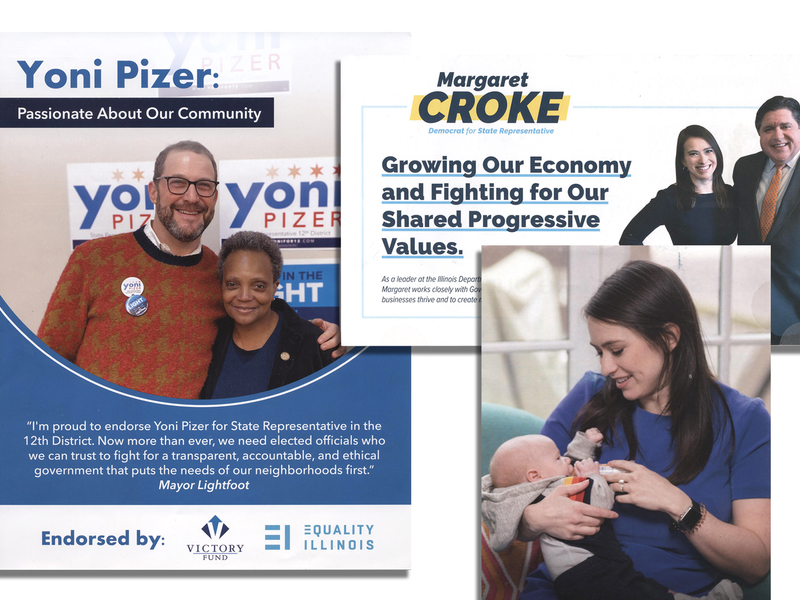 In Minneapolis, Seattle or some other bastion of good government, elections usually focus on issues and personal qualities, stuff such as who has the best platform or is best qualified to do the job. Chicago often employs a different currency at election time: tribe, the question of who sent you, where you came from and whether you’re one of “us.”

A classic example of Chicago-style politics has broken out on the North Side for the state rep seat vacated by Sarah Feigenholtz, who recently moved up to the Senate. There are no real issue differences there: Everyone is socially liberal, cheers for the Cubs, thinks their taxes are too high and swears that Donald Trump represents the end of civilization. Instead, the issue is tribe in a battle that pits a candidate backed by Mayor Lori Lightfoot against one fielded by Gov. J.B. Pritzker.

In one corner in the Democratic primary contest is Yoni Pizer, a 55-year-old openly gay Jewish man from Lakeview who has been involved in any number of gay-rights-related causes through the years, has lived in the neighborhood for decades, and who isn’t at all shy in arguing that it’s time for that community to have one of its own in Springfield. He’s Lightfoot’s choice.

In the other is 28-year-old Old Town resident Margaret Croke, who moved to the area a few years ago from Oak Park, is married to an Irish Catholic (she herself is English Protestant) and whose background is in women’s rights politics. She campaigned for and served in Pritzker’s government, and the governor has pulled out all the stops to elect her.

There are other candidates who have some good ideas. Like progressive Jimmy Garfield, who is the only one in the field to flatly promise not to vote to re-elect Mike Madigan as Illinois House speaker. But the money and attention overwhelmingly have gone to Pizer and Croke, whose pitches are as different as Croke including a picture of her 10-week-old son, P.J., in one of her campaign flyers and Pizer posing in his literature in front of a rainbow-flag pylon on North Halsted Street.

Croke’s pitch is that tired old Springfield needs some new blood. Like her.

“I think it’s time for new leadership,” she told me in a phone interview. “These seats don’t come up (vacant) very often, and I don’t want to be waiting another 25 years for a chance to serve.” She’s pushing issues such as lowering property taxes, protecting abortion rights and ensuring that gay and lesbian people do not face discrimination in the adoption process.

Croke worked for Cook County Commissioner Bridget Gainer and in the 2016 Hillary Clinton campaign before becoming director of women’s outreach in Pritzker’s operation. Most recently, she’s served as deputy chief of staff in the Illinois Department of Commerce & Economic Opportunity.

Pizer worked in a real estate business with his husband, Brad Lippitz, served as community liaison to U.S. Rep. Mike Quigley and points to the couple’s own two children.

“I’ve got the longest and deepest roots in the community. I’ve been here for three decades,” he says, adding that he, too, favors women’s rights and lower taxes. While his opponents also say they favor gay rights, in the era of Trump and right-wing strength, “it’s important to have someone in those communities to speak for them.”

Both sides have been exerting a little political muscle. For instance, Pizer was appointed by Democratic ward committeemen to temporarily fill Feigenholtz’s seat, but Croke initially applied for the post, too. Among those working for Croke are Lightfoot’s pollster and fundraiser—both asked permission to do so before it became clear Lightfoot would back Pizer, a source close to the matter says—as well as Ald. Brendan Reilly, 42nd. But Pizer has the endorsement of Feigenholtz and House Majority Leader Greg Harris, who has a big say in what happens to Pritzker’s Springfield agenda.

Betting is all over the place on this one. My hunch is the winner will be determined in the poorer, Uptown end of the district. Meanwhile, look for some bruised feelings along the way. Tribal fights rarely die down for long in this town.