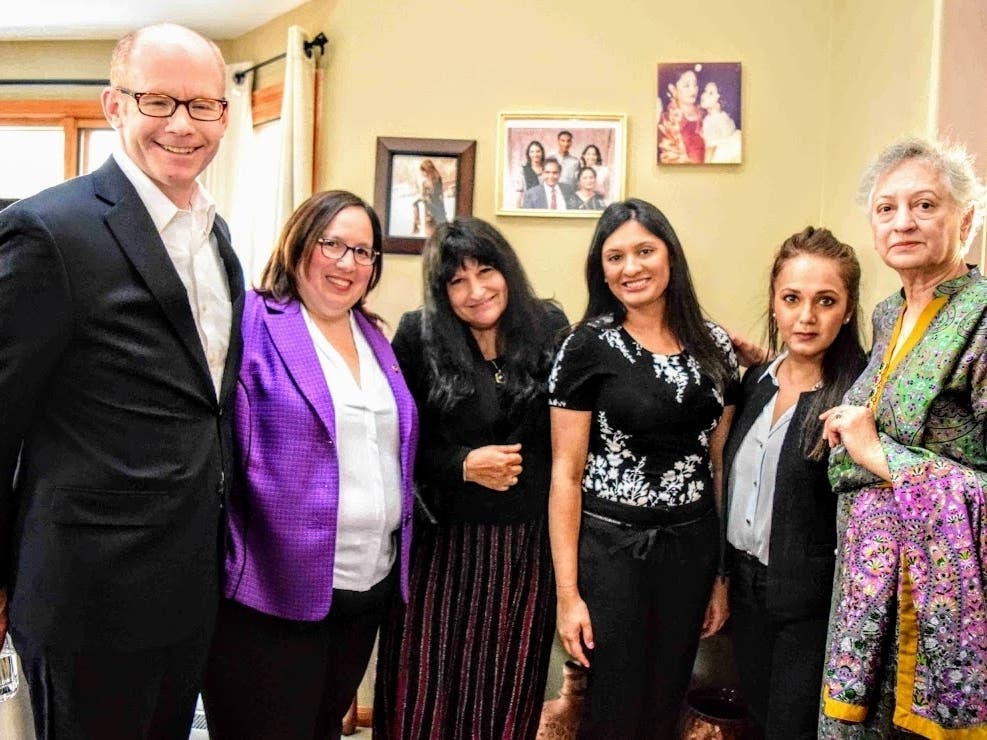 A Meet and Greet gathering of prominent Pakistani and Muslim Community held in North Western Suburb Hosted by Samreen Khan (former Senior Policy Advisor and Liaison to Asians and Muslims, Office of Governor Patrick Quinn) and Her mother Jagnoo in the honor of Illinois Senate President Don Harmon and Illinois State Senator Cristina Castro the gathering was held on Saturday, February 28, 2020 between 3 p.m. to 5. p.m.

The purpose of the gathering was to to determine about candidate Cristina Castro and her policies for communities and state and meet with newly Illinois Senate President Don Harmon.

An Elgin resident Cristina Castro is running for re-election to the Illinois State Senate to represent District 22. She is on the ballot in the Democratic primary on March 17, 2020. Her District represents includes all or portions of Elgin, Barrington Hills, Carpentersville, East Dundee, South Elgin, Streamwood, Hoffman Estates, Hanover Park, Bartlett. and portion of City of Schaumburg. She was First elected to the Senate in 2016. She has a Bachelor of Science and Master of Business Administration from Northern Illinois University.

Senator Castro said, "I am a second generation Mexican-American and previously a two-term Kane County Commissioner background, life experiences, and compassion to represent the interests and concerns of the people. I serve as a chairperson for the committee on Revenue as well as Government Accountability and Pension I also work Commerce and Economic Development, Veterans Affairs, Labor, Transportation committees as well.

During Question and Answer Session, senator Castro said, "Stronger gun laws are long overdue. It’s time to elect leaders who will protect us from gun violence.

Answer to Another Question about pension programs She said, "we Passed new law Bill, 1300 sign already by Governor Pritzker it improves the financial stability of the pension funds, while easing pressure on local governments to raise taxes to fund those pensions.

Another Question about Property tax and migration from Illinois. Illinois Senate President Don Harmon and senator Castro both answers separately. Mr. Don Said there is lot of Factor involved to Migration. One is Property Tax is getting high for working Class family, the College tuition fee is high from others state and New Immigrations is not coming to Illinois. Senator Castro said, "We had financial crisis created under the former Governor Bruce Rauner there was no Budget for three years. Under the Governor Pritzker Administration, we will make Illinois Back on track. The Working class will get relief from Taxes and restoring Illinois’ financial Problem. We want the wealthy to pay their fair share and our regressive tax systems hurts many working families in Illinois State.

Another Question was asked from an attendee about Muslims Holiday Don Harmon and senator Castro both said, "we are working on that idea with different religious group and Advisory Councils and Governor Pritzker will announce.