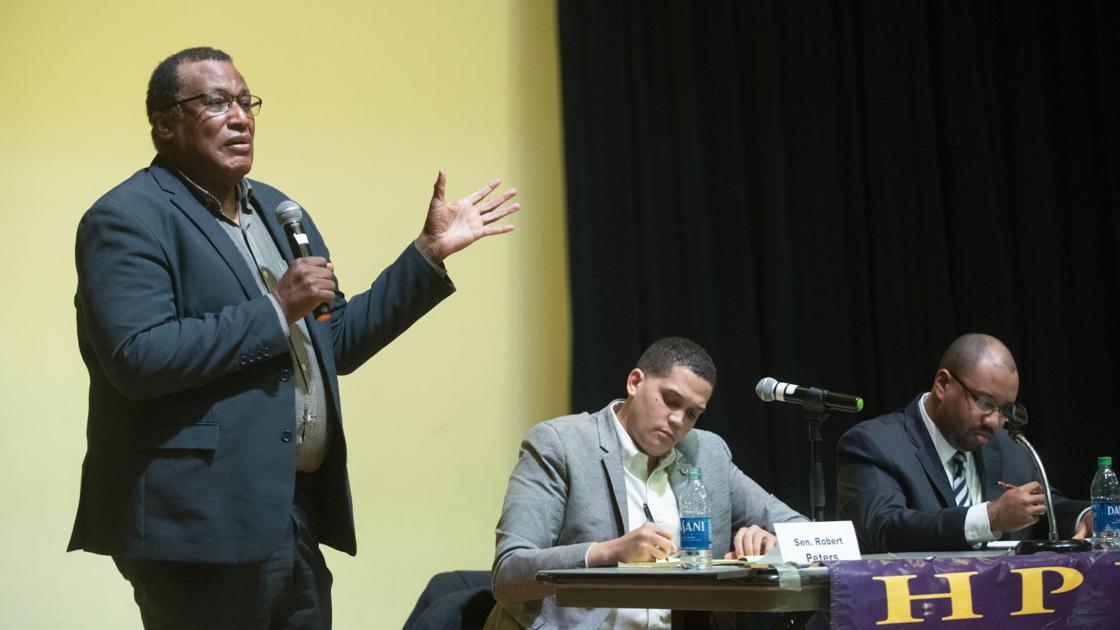 Sen. Robert Peters (D-13th) and opponent Ken Thomas gently sparred at a candidate forum Saturday morning, while Marc Loveless made the case for why voters should write in his name against Rep. Kambium Buckner (D-26th) in the Democratic primary on March 17.

Both Buckner and Rep. Curtis J. Tarver II (D-25th) skipped the forum at Kenwood Academy, organized by Hyde Park-Kenwood Community Conference and the Coalition for Equitable Community Development (CEDC). Buckner’s chief of staff called organizers the day before to say that he had “double-booked” himself for that morning. Linda Thisted of CEDC said that Tarver never responded to the group’s invitation.

After candidate introductions, the remainder of the forum consisted of policy questions asked by the organizers and audience members on a variety of issues, including rent control, education funding, public safety, homelessness and taxes.

Peters and Thomas often seemed to be engaged in a contest of who could make the more persuasive case for the same policies — with minor differences, the two agreed on nearly all of the topics about which they were asked.

During the League of Women Voters forum between the pair on Feb. 22, Thomas spent time criticizing Peters as a symbol of corruption. But on Saturday, he only made a few indirect references to the state senator’s special appointment last January, mentioning it at the end of a long answer about election reform.

“I also think we need to get rid of these backroom deal appointments for state legislative vacancies,” he said. “It puts the power to the politicians to pick your public officials, and that power should be with the people.”

Both candidates, instead, emphasized their similar biographies: a difficult childhood that provided the motivation for a career in public service. Peters spoke about how his mother was forced to give him up for adoption, and he grew up deaf and mute, unable to speak until the age of 12. When he couldn’t find a job after graduating from college during the recession, he turned to organizing.

“So many of us were told to pick ourselves up by bootstraps that didn’t exist. So I went into organizing,” he said. “I organized to increase the minimum wage. I organized to set affordable bonds, which lock people up because they’re poor.”

He also noted briefly the misgivings some people had around his appointment, recasting it as motivation for his productive first year as a legislator.

“I got appointed, and a lot of people were rightly upset about this appointment, because we have a political system where people don’t have trust and faith in it anymore,” he said. “And that pushed me — it kicked my butt. I’ve had 13 bills, the most for any freshman legislator appointed or elected.”

Thomas, for his part, recalled living at his grandmother’s house, where he was raised by a single mother on food stamps. A University of Chicago Law School graduate, Thomas said that he remembered the poverty and insecurity of his own upbringing once he joined the law firm Skadden Arps. While employed as an associate there, he also worked pro bono with low-income tenants in eviction court and joined hundreds of other attorneys at O’Hare Airport after President Donald Trump’s Muslim ban went into effect.

Thomas repeatedly emphasized this work during the rest of the forum, using it, for instance, as evidence of why the state legislature should repeal the prohibition on municipalities’ ability to pass rent control laws. Peters agreed, noting he would sponsor any bill to lift the ban.

The two candidates also said they both support the end of red light cameras, a progressive statewide income tax, a community benefits agreement around the Obama Presidential Center, more funding for public schools in the district, and the passage of the Clean Energy Jobs Act, which creates a plan for Illinois to use only renewable energy by 2050.

One small disagreement came over the issue of a real estate transfer tax linked to homeless services. During her election campaign, Mayor Lori Lightfoot proposed an extra tax on high-end property transactions, which would go to fund the city’s budget deficit. The plan failed last year after a group of progressive legislators said that they would not vote for it unless revenues were also directed to providing housing and services to the homeless. Recently, the Tribune reported in February, Lightfoot has been in conversation with those lawmakers over the idea again.

Peters said that he supports using the tax to fund homeless services. Thomas was slightly more cautious, noting that he prioritized the real estate tax, and did not want to “throw the baby out with the bathwater.” Asked for clarification by the Herald after the forum, Thomas said that he would rather see the tax passed without the provision for homeless services — and find another way to pay for those services — than see it not pass at all.

The two also parted ways on the presidential election. Thomas said that he was “singularly focused on getting the idiot we have out of the White House,” and did not yet know who he would be voting for in the election.

Peters endorsed Sen. Bernie Sanders (I-Vt.) last August, and said at the forum that his candidacy represented an opportunity to build a “multi-generation, multi-ethnic movement.”

While Loveless generally agreed with the other candidates, he diverged over issues like Tax Increment Financing (TIF) districts, as well as community benefits agreement (CBA)-type legislation proposed for housing in Woodlawn. Both Robert and Peters were skeptical that TIFs should continue to exist, but Loveless argued for a return to their original use under Mayor Harold Washington.

“I think it’s more than well-intended — I think it does have a space in urban development,” he said. “We’ve got to make sure the movement on it is forward and not regressive.”

Loveless, who was removed from the ballot earlier this year, also sounded a different note on the CBA.

“The community needs to set the standards of what the expectations are. I don’t think a CBA is going to make them do what’s right,” he said. “I think the conversation has to be elevated to a point of not them versus us, or us versus them, but we’ve gotta look at what makes sense in terms of meeting the needs of people who are in the community now and the environment we want to create. At this point I don’t really know if there’s interest in having that conversation.”

In both his opening and closing statements, Loveless criticized Buckner for being an absent legislator. In particular, he noted that Buckner did not vote for House Bill 2665 and Senate Bill 1321. The former allows minors to access healthcare services like PrEP (used for HIV prevention) without parental consent, while the latter is the Medicaid reform bill signed into law last August. Buckner voted for the Medicaid bill on the floor of the House but did not vote in his committee.

“The issue is that we’re an engaged people in this district. It’s intolerable to think of a state legislator that are not gonna have positions on issues so near and dear to us,” he said.

“You’re not gonna see my name on the ballot, but you’re going to see a spot that says ‘write-in.’ … I have pens so that you can write in — don’t leave without getting a pen.”