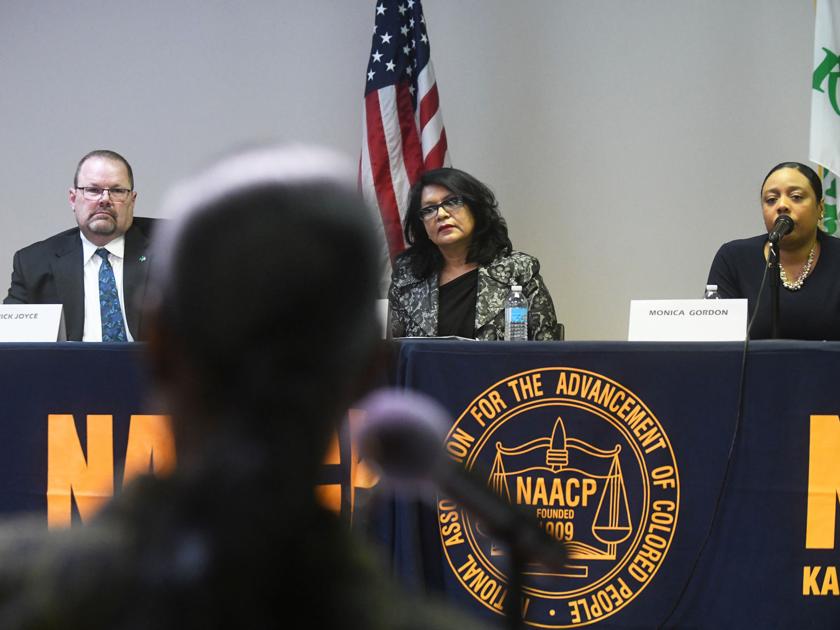 Who is the best Democratic candidate for the 40th District Senate seat? The Kankakee County Branch of the NAACP hosted a forum to help area voters decide in advance of the March 17 primary election.

The candidate forum was held Monday at the Kankakee Public Library in the fourth-floor auditorium. Candidates included incumbent Patrick Joyce, Marta Perales and Monica Gordon. Lori Wilcox was expected to attend but was unable to do so because of the flu.

The candidates answered an array of questions from the panel and a handful submitted by the audience of approximately 60 people. Topics included economic development, the river conservancy district, the long-proposed but dormant South Suburban airport near Peotone, school funding, government consolidation and property tax relief among others.

Each candidate was asked their input on topics affecting the district. Here’s a sampling:

Perales: “A lot of it is just talking to each other and talking to developers, labor unions, environmental organizations and economic alliance to ensure that what we’re doing is going to be fruitful for the municipality but also the region itself.”

Gordon: “The South Suburban airport, those 15,000 jobs at every skill level, would help residents of the southern part as well as the northern part of the district, meaning Kankakee, as well as Southland and eastern Will County.”

Joyce: “It’s imperative that you get communication with all parts of the district. So you have to form committees that will have economic impact to the agriculture sector, the suburban sector and the urban sectors of your district. You’ve got community leaders, mayors, townships and municipalities. All need to be brought to the table on many different issues.”

Perales: “I believe it’s a county issue. And unfortunately, the way it’s written only some people’s property taxes are going to go up in that particular referendum, so I think there needs to be more education in terms of that. My belief is that it affects the whole county, so the whole county should be chipping in to find a solution, not just the property owners who live along the river.”

Gordon: “I think there is an opportunity to gain state grant funding to help this issue as well. I think it starts with open communication.”

Joyce: “The referendum is going to be $24 [per year] for people who are on either side of the Kankakee River in flood plains. Those people get to vote on it. I’m in favor of it. It’s going to raise almost $400,000 more than the conservancy currently has. The Kankakee River has been an ongoing issue. … It’s an important asset for this county.”

Joyce: “I’m in favor of the third airport, and I think you will find most people in the 40th district are in favor of it. I talked to a few groups who were opposed to it. I explained why it’s important for the economic development of this state, not just the 40th District. The Southland needs this project. Kankakee area needs this project. … Finding airlines that are going to commit to it is going to help future discussions. I think that’s one of the hold-ups currently.”

Perales: “I’m in full support of it with the land being purchased. What I’m concerned about, Sen. Toi Hutchinson passed a public-private partnership I believe in 2012 to build the third airport. Without any discussion from developers, I don’t know who’s going to build it. That’s my concern.”

Gordon: “I’m in favor of it. … In addition to the jobs, we’re talking about $170 million in tax revenue and a $2.6 billion economic impact. It’s a pretty much a no-brainer for me about the airport, but I do realize there are groups who do have resistance to it.”

Joyce: “We consolidated the fire and police protection pensions last fall. It’s going to save the state $140 million. We talked about consolidating townships. Those are conversations that need to be had. Where can we find waste in our state, and then make our state more stable. … We have the ship righted, but there are going to be some tough times.”

Perales: “A lot of people are concerned about their property taxes. When we talk about freezing the property levee, what that does is actually going to hurt the municipalities. So it’s a double-edged sword when it comes to education-funding reform. We are on the right path, and I’m hoping in a few years we’ll get closer to where we need to be, but more needs to be done.”

Gordon: “It’s a full circle to go back to the third airport, the south suburban airport will provide a commercial tax base and that will help relieve some of the burden of the property taxes.”

via The Daily Journal