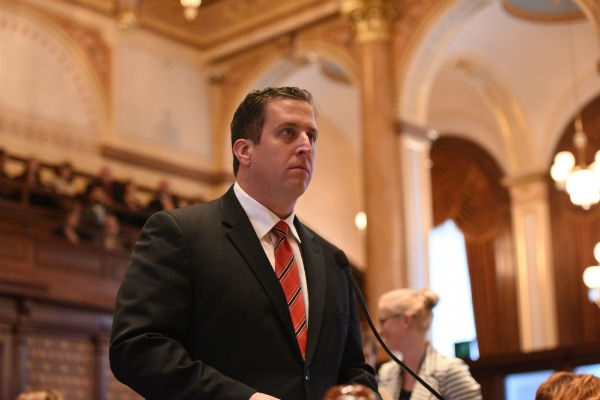 SPRINGFIELD – Sen. Don Harmon, D-Oak Park, is the new Senate president, thanks, in large part, to a group of moderate suburban and downstate Democrats who quietly supported him in his monthslong rise to the head of the chamber.

The group, calling itself the “X Caucus” is made up of “approximately 10 to 12” members depending on the issue, said Democratic Tinley Park Sen. Michael Hastings. He also noted the caucus sought certain concessions in backing Harmon, including increased power at the committee chair level and better “flow of information.”

“The X Caucus had an influential role in the process,” Hastings said. “It’s normally not a loud caucus, but it’s an effective caucus.”

Hastings called the caucus, which also includes Democrat Steve Landek of Bridgeview, “a good group of commonsense, consensus-building legislators” who “don’t fit into the ultraconservative or ultraliberal sects” of the Democratic Party.

In the end, their support was unanimous for Harmon, who had a 22-17 edge on his opponent, Kimberly Lightford, D-Maywood, on the first blind vote that was conducted behind the locked door of the Senate president’s chamber on the third floor of the Capitol. Media and the public were not allowed even in the corridors outside the offices or the floors immediately below it.

After the closed-door meeting, there was no second ballot as Harmon’s and Lightford’s camps reached an agreement that would make him president. Lightford will remain Senate majority leader, Harmon said.

Harmon took questions for just more than two minutes after the vote, noting he had “a lot of work left to do this evening.”

“We’re trying to organize the Senate, we gotta meet with the staff, make sure everyone understands where we’re going from here, and things I haven’t even been told what they are yet,” he said. “I’m sure I’m going to learn on the way.”

He said the Democrats “built a coalition ticket reflecting the diversity of our caucus.”

Hastings said the eventual unanimous support from the Democratic members of the Senate without a second ballot indicated Harmon’s “professionalism” and ability to lead.

Aside from seeking rules to “increase chairmanship power” and the inclusion of “various caucuses” in leadership roles, Hastings said the X Caucus sought a “more inclusive” leadership approach.

“Not that the last Senate president wasn’t inclusive, but a more inclusive approach toward what’s going on in the in the caucus,” he said. “So information flow was a very important topic when picking a new Senate president.”

He said ethics would be “of top priority as well” moving forward.