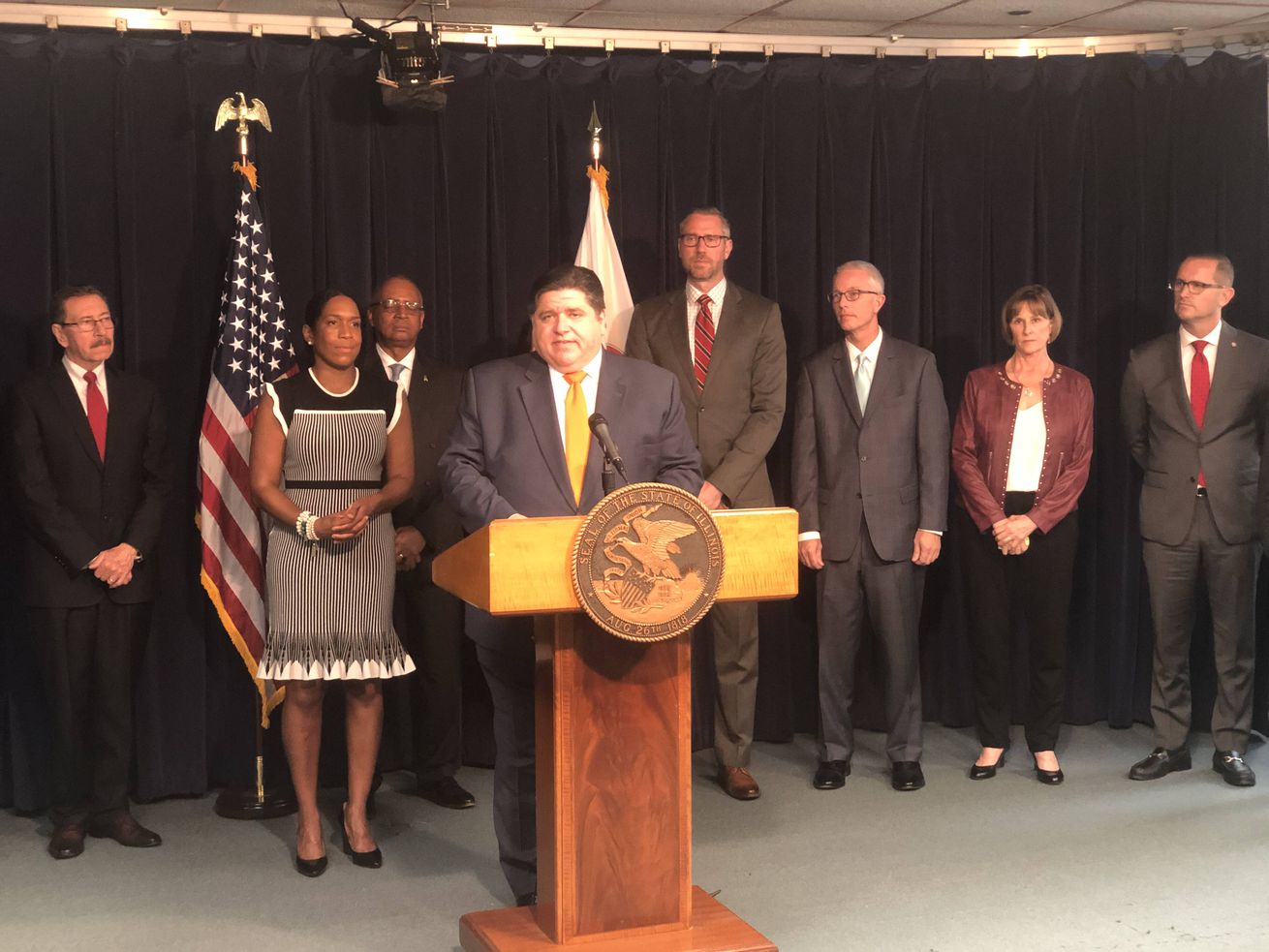 Gov. J. B. Pritzker discusses the findings of his pension consolidation task force Oct. 10. | Office of the Governor

Give Gov. J.B. Pritzker a little credit — not the financial kind, which he doesn’t need and therefore can get in abundance — but the supportive, way-to-go kind. He’s put some attention on the leaden issue of public pension consolidation and done the right things to give it a push in the Illinois General Assembly.

Pritzker highlighted this issue in the campaign and upon becoming governor. He appointed a task force of financial experts and labor representatives to examine pension consolidation. They produced a clear report with achievable recommendations. Pritzker endorsed the findings at a news conference, promising to bring legislation forward for the upcoming veto session.

But his salesmanship is slightly off. He should call it property tax relief, not pension consolidation. It would get more attention. And the governor needs to emphasize that he wants to give police and fire employees and retirees across the state the right to better returns on their money.

The issue here is the future of 649 police and fire pension funds that serve towns and cities outside Chicago in the suburbs and downstate, from Zion to Cairo. Many are small, with less than $10 million in assets, and underfunded, with some paying out more in benefits than they collect in contributions or investment returns. In Illinois, with a well-documented plague of local taxing agencies, it’s not surprising that our government pension funds far outnumber those of any other state except Pennsylvania. New York has nine, for example, and Ohio has one fund for all police and fire personnel.

Consolidation would save on administrative costs, but those are peanuts. The big idea Pritzker needs to broadcast is better investment returns from consolidation. Because of their small size, the Illinois funds can place little money in stocks. They must by law rely on U.S. Treasury debt, municipal bonds and bank CDs. Those are fine for safety and diversity, but for better returns, the funds need to visit the global stock markets. If they are combined into a larger fund, those limits are eased.

The Pritzker task force found the difference in fund performance is substantial. It said the suburban and downstate police and fire funds had a five-year annual average return of 5.06% through 2016. That’s about 2 percentage points less than the state’s larger pension funds, such as those covering Chicago. The Illinois Municipal Retirement Fund, considered to be the best-run state system, earned an annual average of 8.28% over the same five years.

“The key word here is scale. If you don’t have scale, you don’t have the buying power to get the best advice at the cheapest rate,’’ said a source involved with the report.

The task force said if the suburban and downstate funds performed as well as the larger Illinois plans, they would earn an additional $820 million to $2.5 billion in investment gains over five years and up to $12.7 billion over 20 years, when the law says they are supposed to reach a 90% funding level.

That’s money that doesn’t have to be drawn from property taxes to bolster the funds. Consolidating pension funds so they can earn higher returns may be the most consequential property tax relief measure legislators have seen in a while.

Opponents, and there are many with something to lose here, argue participants in the police and fire funds want local control and don’t want to trust somebody in Springfield or at an 800 number to get service.

James McNamee, a former Barrington police officer who is president of the Illinois Public Pension Fund Association, said a better answer would be to keep the funds separate but allow them to make more investments in equities. Even the larger funds, which can hold up to 65% of assets in equities, perhaps should go to 75%, he said. McNamee also cites the risk of liquidating assets to combine funds then have to buy them back again.

More broadly, he’s concerned about a hasty legislative vote involving $15 billion that could be handed over to a large fund where his members have little input. “It’s a big rub with us. We performed as well as the law would let us,” he said. His problem is that haste sounds better when doing nothing costs about $1 million a day in lost returns, according to the governor’s task force.

Buffeted by everything from high-speed trading to presidential tweets, stock markets are volatile. But they are retirees’ best hope.

Investment research firm Morningstar said over the long term, stocks earn on average a nearly 10% annual return, and bonds are about half that. Compounded, the difference is enormous, big enough to distract the General Assembly from workaday matters like who’s passing nominating petitions and when the next indictment will drop.