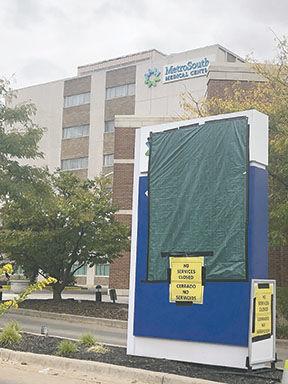 They are now asking the state to order the Blue Island hospital to re-open services after discontinuing them prior to the state’s approval of the hospital’s application to close.

The hospital’s operator, Quorum Health, of Tennessee, is awaiting approval of its application to close from the Illinois Health Facilities and Services Review Board [HFSRB], which in September deferred its decision.

“Quorum’s decision to close MetroSouth before receiving approval from the [HFSRB] is not only an affront to the members of my district who depend on this hospital, but it is also a clear violation of state law,” Rush said in a news release. “It is my hope that by taking this action, we will inform other health corporations that boarding up hospitals outside of state regulations will not be tolerated in my district and certainly not in the state of Illinois. The hardworking citizens that we represent deserve better, and as their elected officials, we expect nothing less.”

MetroSouth officials, citing low usage and financial problems, announced in June they had filed an application with the HFSRB to close by the end of the year if no buyer could be found, and they later said that, with no success in finding a buyer and with staff beginning to depart, they wanted to close on Sept. 30.

The HFSRB was scheduled to decide on the application on Sept. 17 but voted to defer the decision until its next meeting on Thursday, Oct. 22, at Bolingbrook Golf Club.

With staff departing, the hospital began suspending services, and a Quorum spokesperson told The Beverly Review on Oct. 1 that the last patient was discharged and all services had been temporarily suspended.

In a letter to Raoul, Rush pleaded for help.

“The best interest of the residents of Blue Island and the surrounding communities is of my utmost concern,” Rush said. “I am therefore seeking your office’s leadership in investigating this serious matter and determining the proper legal action to be taken against the hospital. In so doing, your actions will inform other health corporations that shuttering hospitals outside state regulations will not be tolerated in Illinois.”

People’s Choice Hospital officials said in a news release that Quorum, in stopping services, is “essentially defying” the HFSRB.

“Just like minutes count when patients face life-or-death situations, time is running out to save MetroSouth. It’s not as simple as turning the lights back on and service is restored,” said People’s Choice President Dr. Seth Guterman, who was part of a group that purchased the hospital in 2008, when it also faced closure. “Every day this facility remains closed exponentially increases the chances it will never re-open.”

People’s Choice officials have tried to purchase the hospital; but negotiations failed this summer, and People’s Choice filed a lawsuit against Quorum requesting the sale go through. The HFSRB discussed the lawsuit during the meeting at which it voted to defer its decision.

The lawsuit claims People’s Choice agreed to buy the hospital for $20 million before Quorum asked for a $1-million deposit that was later reduced.

Quorum officials said they wanted the deposit because of their concerns about litigation filed against People’s Choice for billing fraud and hospital mismanagement.

Quorum officials filed their own lawsuit against the HFSRB, claiming they had provided enough information for the HFSRB to approve the application immediately.

Quorum and Blue Island officials are also negotiating an agreement in which Quorum would pay the city $2 million, and the city would take over the hospital and work on finding a new operator. After six months, Quorum would give the city $3 million for maintenance and security costs. Blue Island officials have said for several months they oppose the closing, and one alderman said Mayor Domingo Vargas agreed to a “backroom deal” with Quorum by negotiating the agreement. Vargas’ office denied that claim and said the deal “was negotiated in good faith by the city’s legal team.”

For more information on MetroSouth’s status, visit the website at hfsrb.gov.

via The Beverly Review