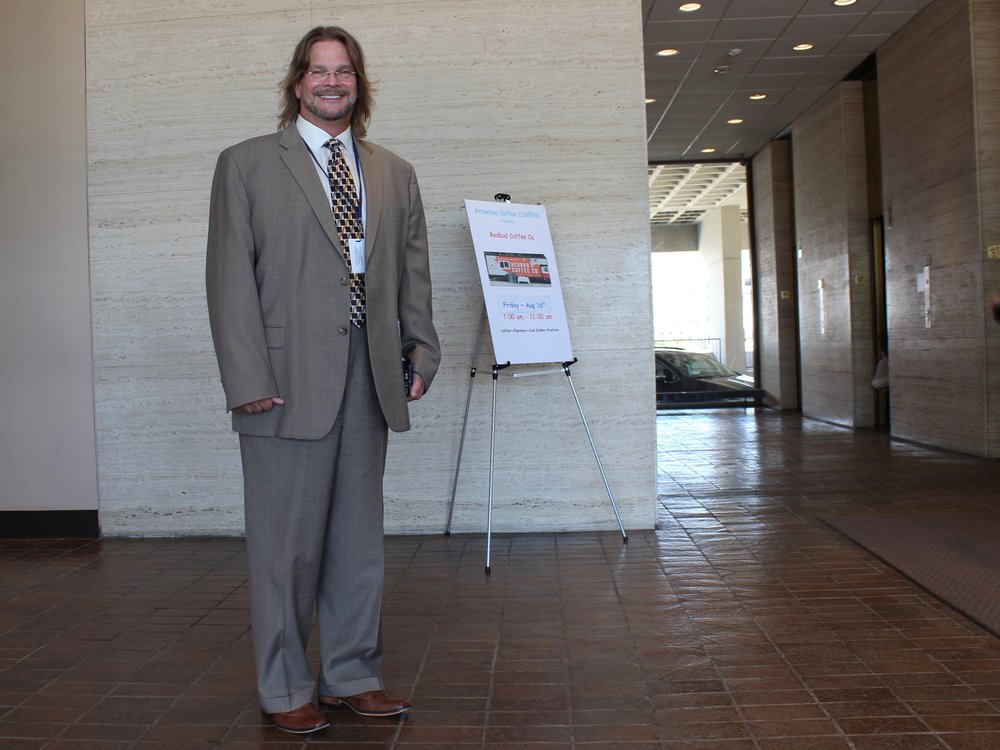 IARSS President Mark Klaisner stands in the lobby at the Illinois State Board of Education in Springfield. (One Illinois/Ted Cox)

The Illinois teacher shortage is worse and getting worser.

An annual survey released in March by the Illinois Association of Regional Superintendents of Schools found that as of last fall 85 percent of state districts had a “major or minor problem” with staffing teachers, up from 78 percent the year before.

New IARSS President Mark Klaisner said he expects that, when figures from the survey this fall are released, it will be “over 90 (percent) this year — easy.”

Klaisner said he’s heard from administrators in southern Illinois who’ve mentioned they might have to close up shop entirely and bus students into adjoining districts. “I consider that a major crisis,” he added.

A majority of 60 percent of districts statewide acknowledged a “serious problem with substitute teacher shortages.” Perhaps even more damning, 20 percent of open positions either remained open or “are filled by an unqualified professional,” with the result that 225 classes were canceled.

Klaisner said an estimated 1,400 teaching positions went unfilled, and if you multiply that by even a conservative 25 kids a classroom — much less the more than 100 students a day teachers are seeing in high school — tens of thousands of students are affected.

“I know some of that’s overly dramatic, but it makes the point that kids aren’t getting what they need,” he said.

Klaisner comes to the new post after a couple years serving as IARSS vice president and five years as executive director at West 40, overseeing dozens of districts in western Cook County. A teacher himself, he’s examined the system from a range of viewpoints.

“I think the big factor right now is salaries,” Klaisner said. “The people downstate are being crushed because they can’t compete with the urban salaries.”

That was reflected in the most recent study, which found that all regions of the state except for the greater Chicago area saw the problem worsen from 2017 to 2018.

Yet, if salaries are a pinch point, that’s true on both sides of the equation. Students in high school and college aren’t going into teaching because the salaries — even with a pension tacked on at the end — aren’t competitive with what people of the same education level are getting in the private sector. In our society, that means a lowered status as well.

Klaisner said this year’s survey, conducted with Illinois State University, the state’s top teacher mill, will look into the attitudes high-schoolers have toward teaching as a profession. For now, however, the situation is dire.

“The pipeline’s drying up,” Klaisner said. “Our universities are telling us they’re graduating anywhere from 10 percent to a third of what they graduated a decade ago” as education majors. “So we don’t have enough qualified people.” 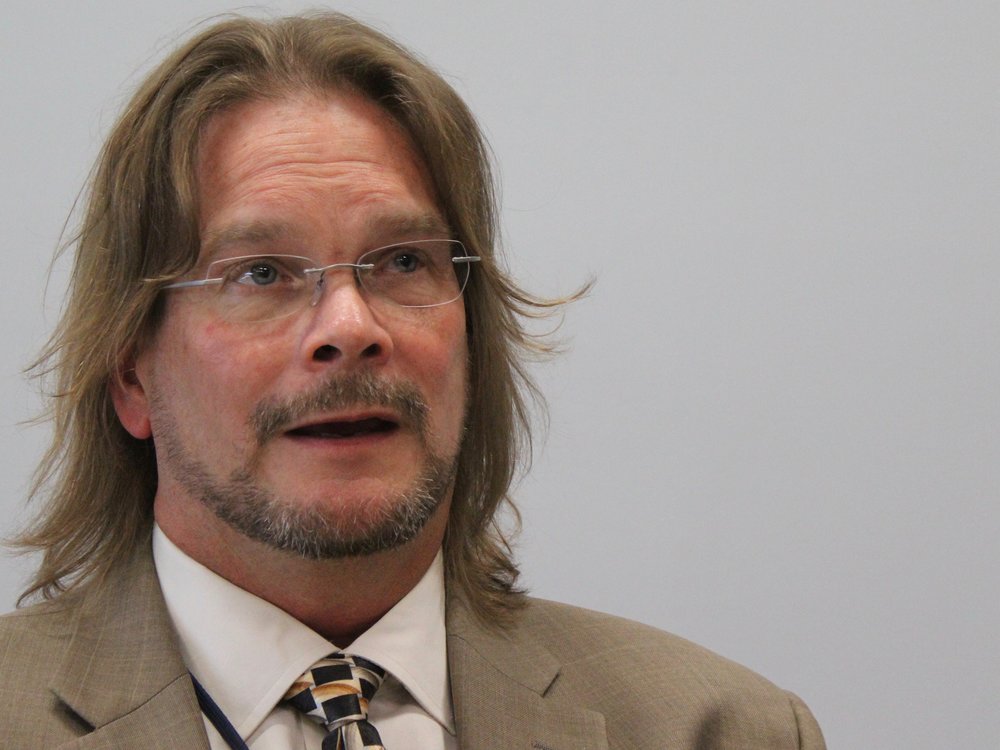 “The pipeline’s drying up. Our universities are telling us they’re graduating anywhere from 10 percent to a third of (the teachers) they graduated a decade ago.”

Add to that, he said, that there’s not just intrastate competition for teachers, but interstate, with other states recruiting teachers at ISU and other colleges and offering higher salaries, subsidized housing, and other perks, and it’s no surprise that last year Illinois was considered a “teacher-export state.”

“We have pretty good universities preparing young people, but our folks can go across a river or across a line and get better pension systems, higher salaries,” Klaisner said. “If you add to that that many of our graduates are coming out of school with sizable debt, with living expenses and cost of living — low salary, high debt — it’s really challenging.”

The good thing is that Illinois is at least aware of the problem and trying to address it, although Klaisner is the first to acknowledge that “any of the real solutions take time.”

State Sen. Andy Manar took on the teacher shortage with a variety of legislation this year, including upping the minimum salary to $40,000 — a bill that passed the General Assembly and is expected to be signed by Gov. Pritzker.

Illinois Education Association President Kathi Griffin recently said that 7,700 teachers statewide did not have a starting salary of $40,000.

The “evidence-based school funding” Manar passed through the statehouse two years ago in a new formula for funding public education should also help address the problem for smaller, rural districts, especially combined with the balanced state budget this year and the $3 billion expected to be added to state revenues when Pritzker’s “fair tax” is approved by voters next year — although it still faces abundant opposition, primarily from Republicans.

Klaisner endorsed another bill easing restrictions on retired teachers coming back to fill the gap, “without damaging their retirement,” and he praised the new Pritzker appointees to the Illinois State Board of Education, led by new Chairman Darren Reisberg. He cited the $193 million in categorical money just freed up by the board for local districts. Between ISBE, the Pritzker administration, and school administrators, “I think there’s a sense of hope here,” he said. “They’re all sort of working together instead of pointing figures.”

Griffin recently credited Pritzker with “creating bridges that have not existed for many years.”

Formally, IARSS would like to see the licensing process for teachers streamlined, and Pritzker recently signed a bill eliminating the need for a basic-skills test. It would also like to see the educator pipeline filled anew through programs like Grow Your Own Teacher. And it intends to keep surveying teachers, aspiring teachers, and others in the education field — including students and parents — to get their feedback.

IARSS also oversees school building permits, and Klaisner said there’s been a flurry of schools adding “man traps” to provide an extra level of security against so-called active shooters. “What funds are available and how do we get those approved to make schools physically safer?” Klaisner added. Pritzker’s $45 billion capital bill should help with that going forward, and the governor himself has suggested that capital spending should ease the burden on local school districts and allow them to plow those savings back into the classroom — or to provide property-tax relief.

In the short term, Klaisner also suggested he’d like to “eliminate grade spans,” which call for specialization in teaching, but can sometimes seem arbitrary. Klaisner pointed out that some teachers are licensed for kindergarten through fifth grade, but what about allowing someone in that category to teach sixth grade or geography?

“Suddenly, that would allow some flexibility,” he said. “Let’s eliminate those lines for two years and see if that kind of settles out some of the shortages.”

None of it’s simple, it’s all interrelated, and of course it’s also essential to maintain the quality of education.

“Without losing rigor, how do we find really qualified people?” Klaisner said. “How do you increase numbers without losing rigor or quality? It’s a little bit of a supply-and-demand economics thing. And you can’t just eliminate all the requirements, so that if they’ve got a pulse they can teach.”

But administrators are working on the problem, as are teachers, ISBE, the governor, and the General Assembly. “There are so many people doing good things,” Klaisner said, “we just have to figure out who’s doing what well and replicate that elsewhere.”