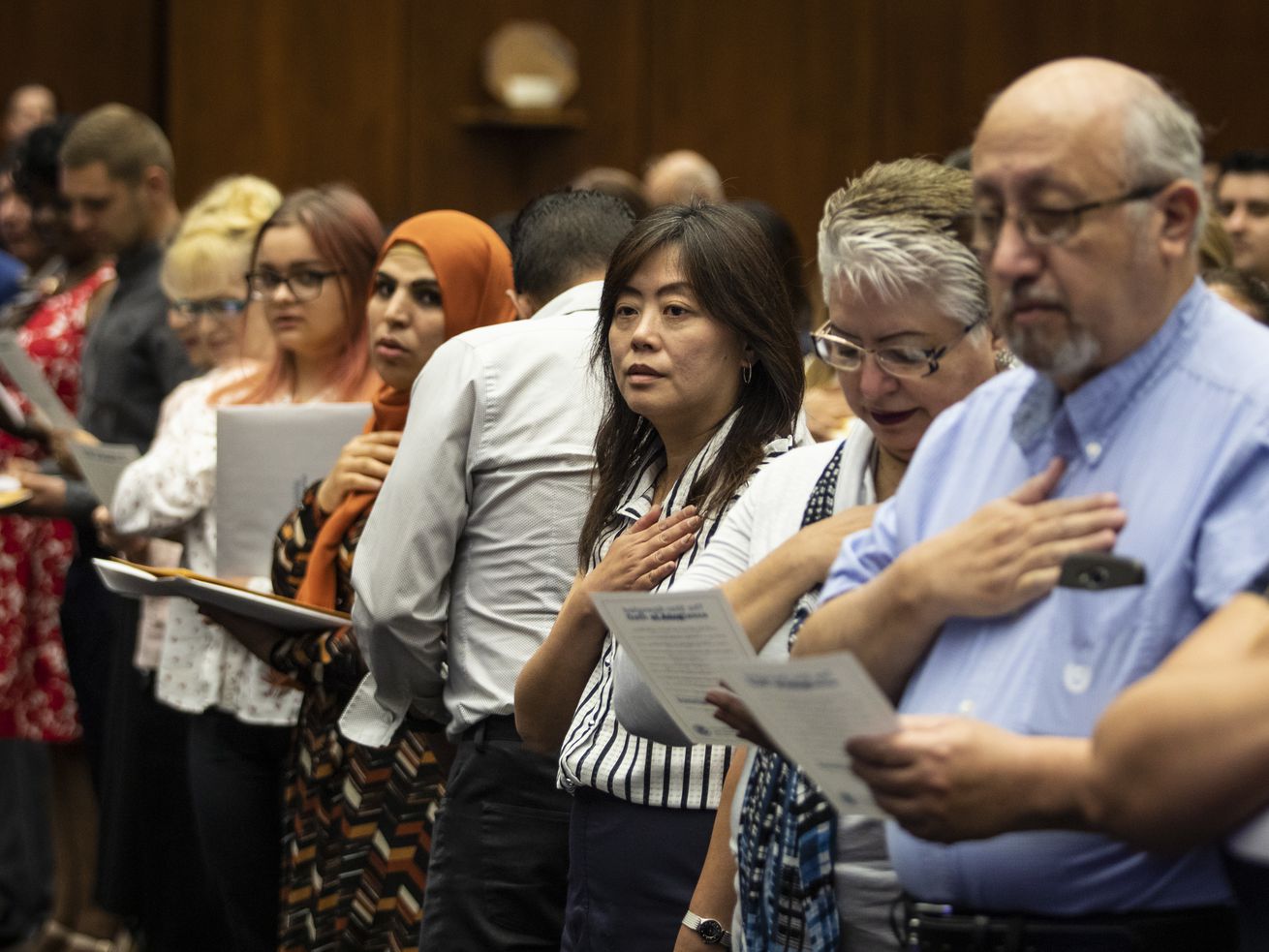 New American citizens take an oath of allegiance on July 2 at the Dirksen Federal Building in downtown Chicago. | Ashlee Rezin/Sun-Times

Gov. J.B. Pritzker signed legislation requiring a semester of civics. The goal is to teach kids how to be good citizens. But what about their folks?

Students in Illinois public schools must understand civics. That’s the law in this state.

What does that mean?

The goal is to teach children how to be good citizens.

Ask a roomful of adults what that means and you could start a heated argument.

From personal experience, I think most folks think it means that you must say the Pledge of Allegiance, salute the flag, vote on election day and stand up for free speech, freedom of religion or the right to own a gun (choose only one) at some point in your life.

That would pretty much cover civics.

I once got into a heated argument with a colleague who told me he would refuse to serve as a juror when called.

I told him he had a civic duty to serve on a jury. It is one of the greatest responsibilities of citizenship in this country. It is an honor.

He received a notice for jury duty. When attorneys and a judge began questioning him during jury selection, he said he could not serve as a matter of conscience. The judge urged him to participate. My colleague said he could not. He was excused from jury duty.

In the eyes of my colleague, he had done his civic duty.

When I was a young child, a teacher told me the purpose of a public education was to prepare people for citizenship. We all have certain responsibilities, jobs to do, as members of a democracy or it will fail. It’s up to us to make sure things run well. That’s what I remember being told.

I don’t know what happened to that sort of idealism, but a bunch of folks, including organizations such as the McCormick Foundation, the McArthur Foundation and the Citizens Advocacy Center, to mention a few, decided Illinois needed to start teaching civics in the schools.

There was no such requirement before 2015.

Children learned history. They memorized the dates of the Declaration of Independence and the Civil War. But they were being taught nothing about citizenship.

“That means being able to understand how every level of government — local, state and federal — works,” said Maryam Judar, executive director of the Citizens Advocacy Center in Elmhurst.

“It means knowing where to go if you need to get a street repaired, or to lodge a complaint if there’s a large building planned for your community. It’s teaching people how to make the government work for you. It means knowing how to do research so you can make an argument that supports your position.

“It means learning how to discern if something is fake news, opinion or actual facts. What is a reputable source of news and what is something sponsored by some organization with a political point to make?”

Shawn Healy, director of the Democracy Program at the Robert R. McCormick Foundation, said that various polls have shown there is very little emphasis on voting in local elections in Illinois. The perception of government corruption is high and people have little sense that they can change things.

I understand the frustration. I am frustrated by my fellow citizens who disown their government. They blame politicians, wealthy businessmen, the Russians, Trump, socialists, Republicans and Democrats.

There is no sense of personal accountability. It’s always someone else’s problem.

I hope these civics classes teach people that this is our government. We are responsible for all of it, good and bad. The stuff we like and the stuff we hate.

Together people can make it better. Not perfect. Just better. That’s our job.

Hey, can we mandate civics classes for elected officials?