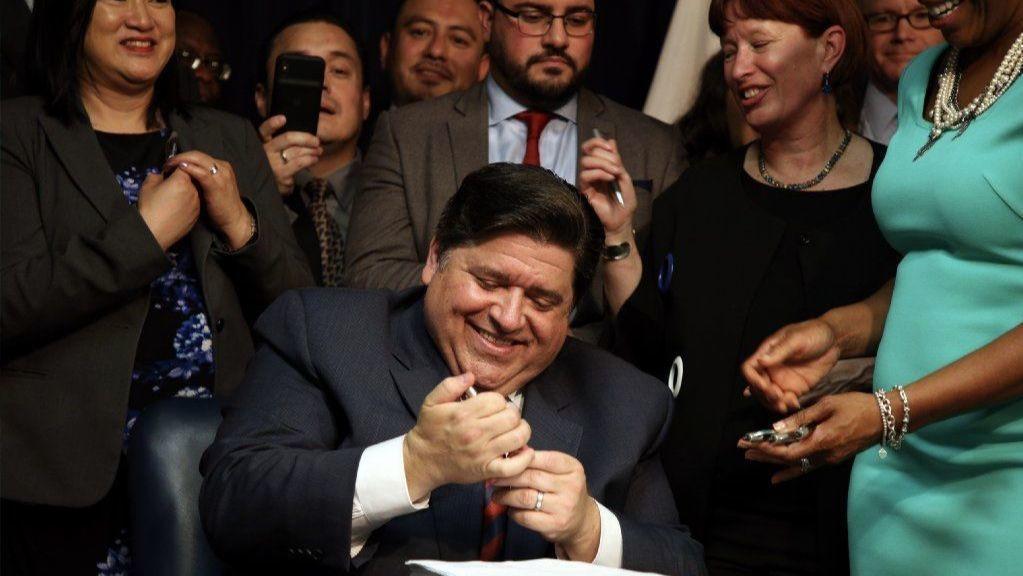 After delivering on all the major pieces of his ambitious agenda this spring, Democratic Gov. J.B. Pritzker began his victory lap Wednesday, signing into law a $40 billion bipartisan state spending plan that takes effect next month.

The governor also signed new graduated income tax rates that would only take effect if voters next year approve a change to the Illinois Constitution to eliminate the currently mandated flat tax.

Pritzker’s November electoral victory restored one-party Democratic rule in Springfield, and by signing the budget into law, the rookie governor achieved something in less than six months that his predecessor, Republican Gov. Bruce Rauner, didn’t get done until the final year of his single term.

“We achieved something that has alluded state government for decades. We passed a real balanced budget,” Pritzker said at a downtown news conference. “Just a few years ago simply passing a budget was considered nearly impossible and for years before that the budget included gimmicks and tricks and was balanced in name only. Those days are over.”

The plan for the budget year that begins July 1, which members of both parties said is balanced, increases state spending by about $1 billion over last year. It raises funding for elementary and high schools by nearly $379 million, according to the governor’s office, exceeding by $29 million the increase required in a new state education funding formula approved last year. The plan also adds about $150 million more for community colleges and state universities, including a $50 million increase in funding for grants to low-income students. Funding for the Department of Children and Family Services will increase by $80 million, which will allow the troubled child welfare agency to hire 300 additional staff, including caseworkers.

The governor’s office anticipates a $150 million surplus, which would be devoted to paying down some of the state’s $6 billion backlog of unpaid bills.

Pritzker and his supporters in the legislature have described this year’s budget as a bridge to a more stable future for the state’s chronically shaky finances. They’re pinning their hopes for future stability on an amendment to do away with the state constitution’s flat-rate income tax mandate and replace it with a graduated rate structure. After winning approval in the House and Senate, that measure will go before voters in November 2020 for ratification.

Some Republican lawmakers were incensed on Friday when Democratic leaders introduced the 1,500-page budget and accompanying legislation just hours before the legislative sessions scheduled adjournment.

After a day of tense negotiations, however, the budget was approved by a bipartisan vote in the House late Friday and by Senate Democrats in the early morning hours Saturday. Senate Republicans voted against the plan because it includes $1,600 pay raises for legislators, a measure Pritzker defended.

Some members of the House GOP voted for the plan because it was part of a package — including a $45 billion public works construction program — that incorporated some of their priorities, including tax credits for data centers and for manufacturers who purchase equipment.

To help pay for the increases in state spending, Pritzker signed separate legislation that includes a provision to collect sales taxes from more online sellers, a new tax on insurance companies to help pay for the state’s Medicaid managed care program, and a measure decoupling the state income tax from a federal tax break for companies that return foreign profits to the U.S. There also will be a “tax amnesty” program that will allow delinquent filers to pay their overdue taxes from June 30, 2011, through July 1, 2018, without penalty.

The budget does not take into account any potential revenue from legalized recreational marijuana, another measure lawmakers approved last week that Pritzker has said he will sign. Money from new casinos in Chicago, Waukegan and the south suburbs, legalized sports betting, and higher taxes on cigarettes and gasoline, among other sources, will be funneled into road, bridge and building projects through a $45 billion public works construction program also approved last week. Those bills await the governor’s signature as well.

Pritzker and legislative Democrats are hoping 2020 voters give the state permission to raise income tax rates on the wealthiest 3% taxpayers, those earning more than $250,000 a year. A measure the governor signed into law Wednesday establishes what those rates would be beginning Jan. 1, 2021, if the constitutional amendment is approved by 60 percent of those voting on the question or a majority of those voting in the election.

The corporate tax rate would increase to 7.99 percent from the current 7 percent.