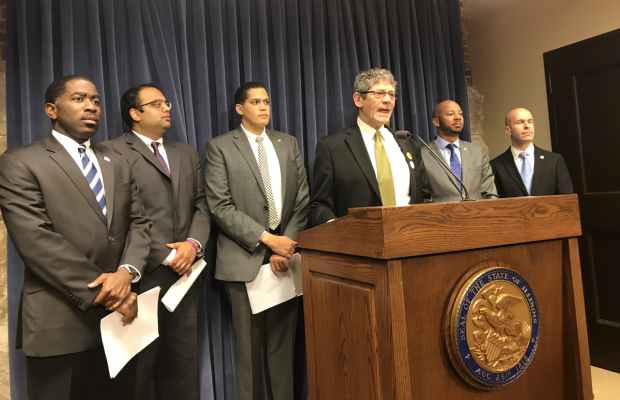 A day after the Illinois House passed the abortion bill, men from the Illinois General Assembly stood to support women’s reproductive rights and to urge the Senate to pass the bill, known as the Reproductive Health Act.

Asked about the House GOP procedure of running its debate almost exclusively through State Rep. Avery Bourne (R-Raymond) – who is six weeks from giving birth – Personal PAC leader Terry Cosgrove (pictured, at mic) said Bourne did not change the facts. He referred to the Republican strategy as a “cheap political ploy.”

He later clarified that he was not referring to Bourne herself, but it was too late. House Republican women castigated him and said his remark was “unacceptable.”

Later in the day, lawmakers from abortion-restrictive Missouri and Georgia came to Springfield in support of RHA, which has yet to receive a Senate vote.