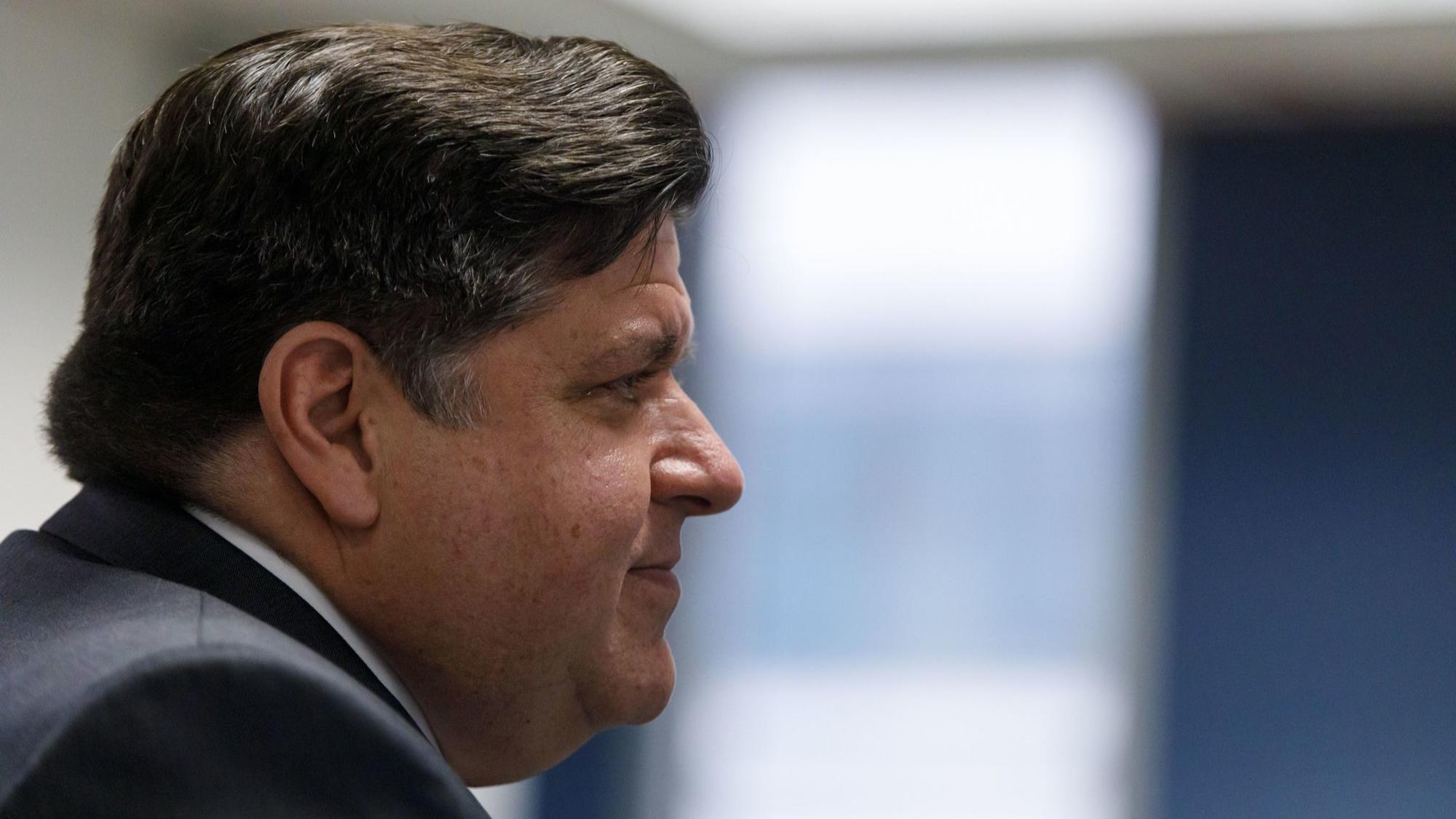 J.B. Pritzker said it was “time to think big” to deal with the state’s challenges when he introduced himself to Illinois voters as a candidate for governor in a TV ad a little more than two years ago.

Now, five months into office, the Democratic governor finds himself just days away from lawmakers deciding the fate of his “think big” agenda. With the spring legislative session scheduled for a May 31 adjournment, the outcome figures to have a significant impact not only on the state but on the governor’s political future.

Pritzker vowed to change the income tax system and legalize sports betting and recreational marijuana. He proposed a series of tax hikes to balance the budget and unveiled a massive public works construction program with its own accompanying tax increases.

“I introduced a lot of very important big priorities for the state. There’s some people who have said I’ve put forward more major important legislation and ideas for this state than has been done in a long time,” Pritzker said at an unrelated event Friday. “So, it takes a while.”

Already, some lawmakers are trying to frame the narrative of the fast-closing legislative session.

State Rep. Robert Martwick, D-Chicago, said potential passage of a balanced state budget, along with the legislature’s earlier approval of an increase in the minimum wage, means Pritzker will have gotten more done in his first year than his predecessor, Republican Gov. Bruce Rauner, “did in four.” Throw in passage of the income-tax amendment, which Martwick is sponsoring, and “that’s a banner year.” Legalizing marijuana or sports betting or both would be “sprinkles on the sundae,” he said.

Freshman Republican Sen. Don DeWitte, of St. Charles, said the heat is on Pritzker and his party, because with one-party Democratic control of the legislature, “they own” the process.

“So it’s going to be on him if this thing doesn’t come together,” DeWitte said. “And I don’t think that’s going to make the voters in this state very happy.”

Regardless of the outcome, Pritzker has the advantage of not facing voters until 2022, practically an eternity given the short-attention-span theater that politics presents to voters. But all 118 members of the House and 20 of the 59-member Senate have a filing deadline late this year for reelection in 2020, making their political concerns more immediate than those of the governor.

“It’s in the Democrats’ best interest to see a successful J.B.,” said Christopher Mooney, a political scientist at the University of Illinois. “They have a strong collective incentive to help him succeed and to at least come out of this thing looking successful. But the group incentive is not the same as the individual incentive.”

For his part, Pritzker has sought to alleviate those taxing concerns by pitching the prospect of future income-tax relief through his plan to ask voters to change the state constitution to remove its flat-tax mandate and allow a graduated-rate tax that puts the highest tax rates on incomes over $250,000.

“The fact is we’re lowering (income) taxes and providing tax relief for 97 percent of people across the state of Illinois with the fair tax,” Pritzker said last week, repeating one of his primary talking points on the proposal.

“Our goal has been to make this system fairer — that the wealthiest people, the people who can most afford to pay, will be the ones who help us out in helping to pay the bills that have been built up over many years now and change the trajectory of our budgeting forever. We’ve got to fill the structural deficit of this state and we’re doing so, in part, with the fair tax,” he said.

Many of Pritzker’s proposals were top issues during his successful campaign over Rauner, the one-term Republican. But it has only been since he took office in January, and in many cases only in recent weeks or days, that Pritzker has provided the details of his plans.

And the coming week may be the best chance for Pritzker to accomplish his most far-reaching goals.

“One thing about agendas and chief executives — get it done now,” Mooney said. “Your best chance of getting anything big done is the first term right after the election. And to be honest, my argument is in favor of a big agenda because this state in a lot of ways has serious problems.”

The very size and scope of the agenda, along with its many still unresolved details, are reasons for consternation among many lawmakers, particularly Democrats who back Pritzker and do not want him to be viewed as weak if the package fails to come to fruition.

“I still remain cautiously optimistic,” state Sen. Heather Steans, D-Chicago, said of Pritzker’s agenda. “I’m certain a budget will get done. … Will every single other item get done? I don’t know.”

Some Democrats say Pritzker should be excused for any portions of his agenda that don’t pass because of the challenges he faced after four years of ideological warfare between Rauner and Democrats. Rauner entered office in 2015 with a 44-point plan called the “turnaround agenda.” In the end, the Republican was shut out, and his battles with the Democratic General Assembly led to an historic state budget impasse, ravaged a variety of services and added to an already staggering pile of unpaid bills owed to state vendors.

“The four years prior had been largely dysfunctional,” said state Rep. Mike Zalewski, D-Riverside. “So when you come in in that instance, you have a lot to do to catch up. And it would have been an ambitious legislative session no matter what the governor put out there.”

Zalewski said the complicated nature of many of the proposals on Pritzker’s agenda — legalizing recreational pot and sports betting, for example — would be big challenges regardless of who’s in the governor’s office.

“If it doesn’t get done, it inevitably is because simply the votes weren’t there,” he said. “I don’t think it’s a reflection on anyone’s leadership. It’s just it’s a lot harder to pass a bill than to kill a bill, and we’re just up against that dynamic right now.”

Changing the income-tax structure has clearly been Pritzker’s top priority for this legislative session, though technically legislative action isn’t required until a year from now, in advance of the November 2020 general election when voters would be asked to ratify the constitutional change.

The proposal is expected to be among the many final-week issues considered by the House as rank-and-file Democratic lawmakers continue to try to leverage their votes in exchange for getting what they want in the budget or on other issues.

Illinois might start charging $1,000 per year to own an electric vehicle: ‘It’s outrageous’ »

Pritzker also campaigned on the need for a massive infrastructure plan to repair not only roads and bridges but state facilities and schools. His $41.5 billion multiyear proposal counts on $1.8 billion in tax hikes and new taxes such as gasoline and license plate fees, ride sharing, monthly garage parking, cable and streaming video, and liquor.

That’s on top of his request to balance the budget for next year with revenues from legalized marijuana and sports betting along with higher or new taxes on cigarettes, plastic bags, managed care organizations and successful video gaming operators. The hundreds of millions of dollars in new revenues in those plans were key to balancing the $38.7 billion operating budget Pritzker proposed in February.

While even his supporters say some of Pritzker’s revenue-raising proposals are unlikely to pass, there is general agreement he will be able to sign a budget, something Rauner didn’t accomplish until the final year of his term.

“Next week’s when the rubber meets the road. So I really feel like we still have plenty of time, but we are all starting to realize that we’ve turned the corner into the home stretch,” said Zalewski, chairman of the House Revenue Committee.

Heading into the weekend, an optimistic Pritzker told reporters that many of his proposals were lined up and ready for a final vote.

“There’s a lot of support for them and I’m looking forward to seeing some success over the next week,” he said.

In that very first “think big” campaign ad for Pritzker from May 2017, it ended with an announcer saying of the Democrat: “Getting things done.”

The next week may decide the veracity of that claim.