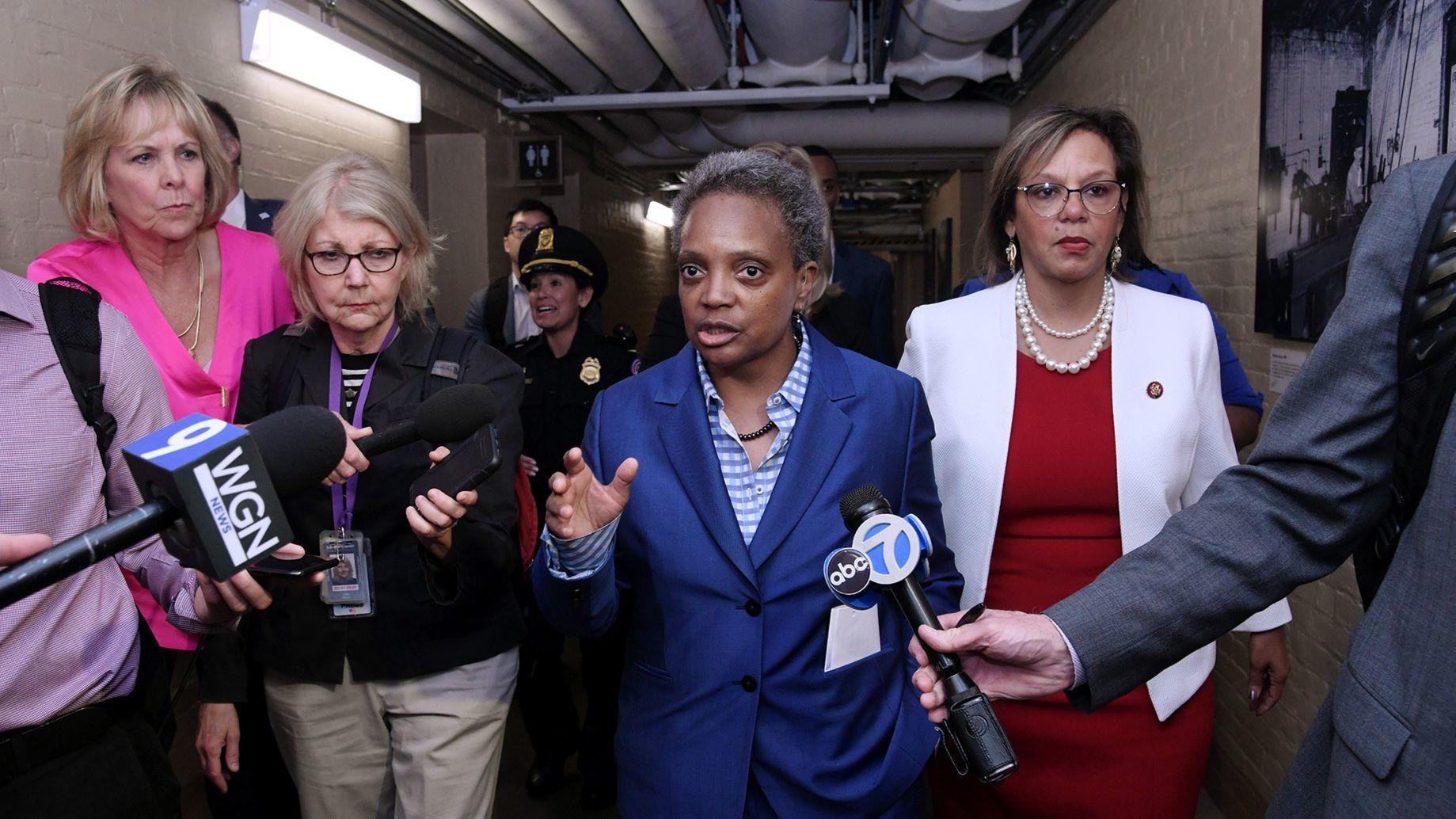 On her second day in Washington, D.C., Chicago Mayor-elect Lori Lightfoot returned to the White House, spoke about Chicago’s crime problems with the Congressional Black Caucus and pitched a top congressional leader on Chicago’s infrastructure needs. Lightfoot also encouraged the CBC’s members during a closed-door meeting to visit Chicago during next year’s Democratic National Convention in Milwaukee.

“Once I take office, my responsibility is to be the chief ambassador for our great city and make sure that people really know the true nature of what’s happening in Chicago and not just screaming headlines that may be tweeted out by a certain someone,” Lightfoot said at an evening news conference, making a clear reference to President Donald Trump.

Lightfoot sidestepped questions about U.S. Rep. Bobby Rush, who wasn’t present for her talk before the black caucus and who has been critical of her in the past.

The mayor-elect’s second day in the nation’s capital featured less high-profile meetings than her first, when she sat down with Ivanka Trump and Speaker Nancy Pelosi. Much of Lightfoot’s schedule focused on infrastructure issues, as she sat down with the Department of Transportation’s under secretary and U.S. Rep. Peter DeFazio, who is chairman of the House transportation committee.

“Chicago’s an important city in the national landscape,” Lightfoot said after the meeting. “People here in the White House understand that.”

A White House release said officials “had a fruitful meeting at the White House covering issues ranging from Opportunity Zones, prison reform, workforce development, and small business creation” and they looked forward to working together.

“They discussed the critical need to curb violence in distressed communities and the Mayor-elect shared her vision for addressing the problem holistically,” the statement said.

Lightfoot met with Washington, D.C., Mayor Muriel Bowser at her City Hall office. Bowser hosted a meeting of black female mayors last year “to just demonstrate that voters want people who are going to get things done, represent their values and execute for their cities.”

“Basically just making sure you’re ready to go and realizing you don’t have to get everything done before inauguration day,” Lightfoot said.

“She seems to be in touch with issues that are not unlike some of the issues we face,” Norton said, singling out gun violence as one problem Washington and Chicago share.

Lightfoot acknowledged afterward that many of the questions she faced Wednesday focused on violence.

“A lot of the members of the caucus represent urban areas that face some of the similar challenges that we do in Chicago, and so I (asked) for ideas from their cities and what they’re seeing to help support our efforts in stemming gun violence in Chicago,” Lightfoot said.

Rush arrived just as Lightfoot was leaving and missed her presentation. During the campaign, Rush said Lightfoot voters would “have the blood of the next young black man or black woman” killed by the police on their hands — an incendiary remark that drew widespread criticism. Rush told reporters Wednesday he hasn’t spoken with Lightfoot since she won but wishes her well.

“I would be so overjoyed, very much overjoyed, if she became the best and most successful mayor that Chicago’s ever had,” Rush said, calling his past remarks about her “old news.” When asked if he would apologize for those past remarks, Rush did not directly answer.

“If she asks me to do it, then we’ll discuss it,” Rush said.

Lightfoot later shrugged off any suggestion of an apology from Rush, saying she intended to focus on the future. Her last public meeting of the day was with DeFazio, the transportation chairman, at his office in the Rayburn building, where Lightfoot said she worked as a young staffer making $12,000 per year after college.

“Where I came from, being here in the big city and really being away from home for a lengthy period of time and being on my own was a very big deal,” Lightfoot said.