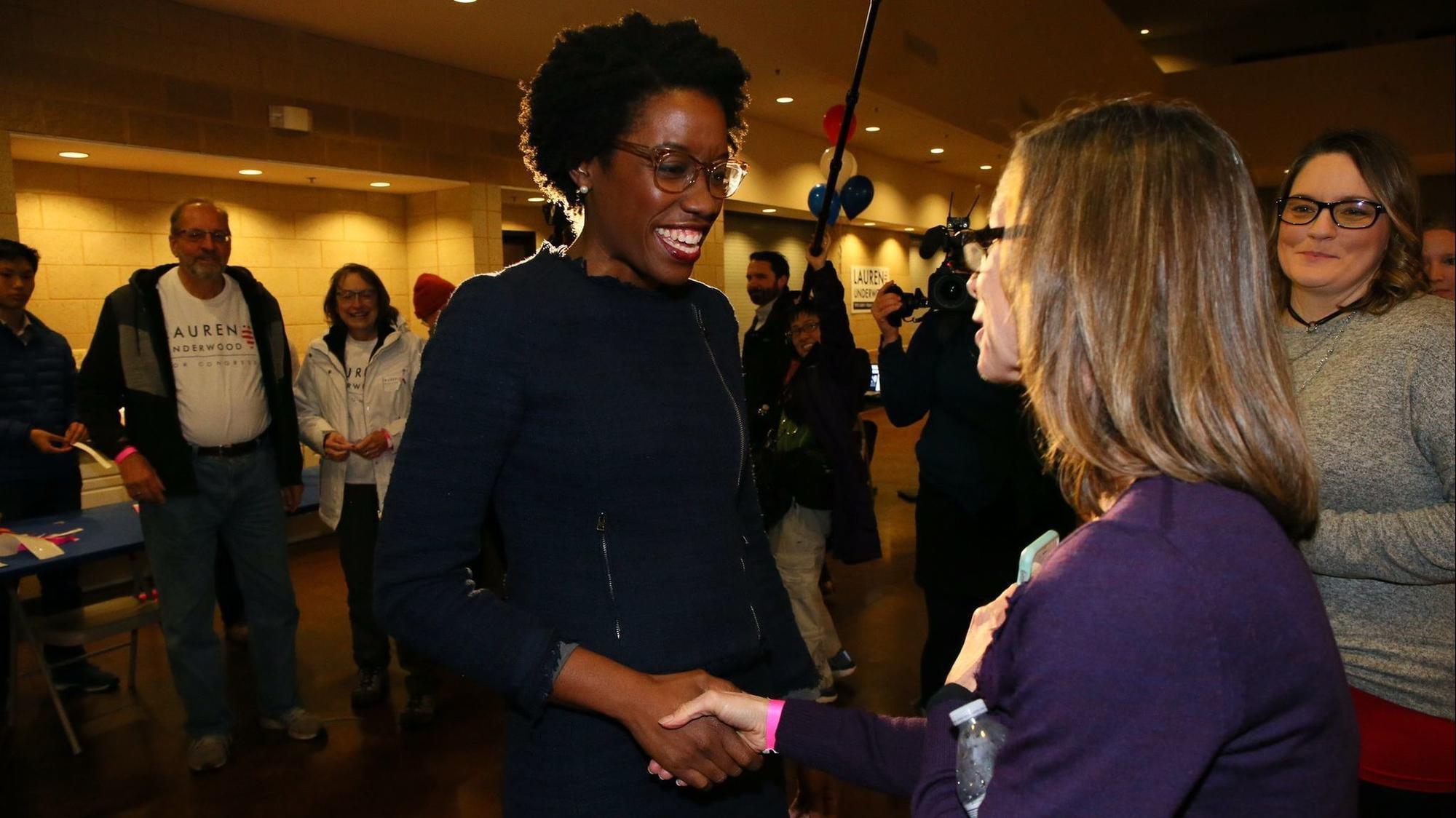 When Carole Kerr moved to DuPage County in the 1970s, she was shocked when a Democratic precinct committeeman knocked on her door. “I thought I was going to faint,” said the longtime Democrat from Naperville.

Like most Democrats in DuPage, Kerr thought she was alone because for decades the county was steadfastly Republican. In many election cycles, the GOP candidate ran unopposed because the Democrats didn’t field a candidate.

Little by little, Kerr said she’s seen the pendulum swing to the left.

Democrat Bill Foster of Naperville was re-elected to Congress in the 11th Congressional District in 2012, and Democrats ousted Republican incumbents in several Naperville and Lisle township races in 2017.

In Tuesday’s midterm election, a blue wave rolled across the county with the Democratic Party winning all six congressional races that reach into DuPage.

The flood of blue swept through Naperville, too, with Democratic candidates winning 80 percent of the precincts in the city.

“I believe that there’s been a fundamental change,” said Kerr, a former Naperville Township committeewoman.

It’s a change that Naperville City Councilwoman Judy Brodhead has been working toward for years, though she took the nonpartisan pathway to public service, believing there was no way for a Democrat to get elected in an area so heavily Republican.

After serving on Naperville’s Plan Commission and Zoning Board of Appeals, Brodhead was elected to Naperville City Council in 2009.

Dems shake up GOP stronghold in DuPage by making history with election of county clerk, county board members »

Voting results the in the last two general elections from the DuPage County Election Commission and the Will County Clerk’s Office prove Broadhead’s philosophy may not be far off.

In both 2014 and 2016, election figures show Naperville voters handily carried Republicans Peter Roskam and Randy Hultgren to wins in the 6th and 14th congressional districts, respectively.

Even though Foster won the 2014 midterm election thanks to turnouts Aurora and Joliet, his Republican opponent, Darlene Senger, captured 43 of the roughly 57 precincts that encompassed Naperville in its four townships back then. In 2016, Foster was able to collect about half the precincts in Naperville.

The 2018 election flipped the narrative.

Despite a strong showing in Naperville in 2014 and 2016, unofficial DuPage numbers show Roskam took only half the Naperville precincts in 2018, helping propel Democrat Sean Casten to a victory.

Results aren’t deemed official until all provisional ballots have been counted and validated. The deadline for that is Nov. 20.

Hultgren’s previously red precinct map in Wheatland Township in Naperville went all blue, based on unofficial Will numbers, to give Democratic challenger Lauren Underwood of Naperville the win.

Foster also gained momentum in the 11th Congressional race this year, picking up four DuPage Township precincts and a Wheatland precinct that in Naperville traditionally had been red for at least the last decade, unofficial results show.

Foster performed much better in the Lisle and Naperville Township portions of the city, losing in three precincts Tuesday to his Republican challenger Nick Stella, and unofficial figures indicate the losses in those precincts were by 10 or fewer votes.

Jim Ruhl, chairman of the Naperville Township Republican Organization, said what drove suburban voters to the polls was more related to personality than economics. “You cannot deny we have record job growth,” he said.

And Ruhl expects voters will flip back in the next election cycle when the people they’ve elected fail to perform.

“The very politics going on in Chicago are what will be coming. It will have a big impact on the DuPage County area,” Ruhl said.

The Democratic sweep this election was a surprise, Brodhead said.

“Republicans have always had almost all of the elected offices, and that didn’t necessarily reflect the voting preferences of the residents because very often there was no Democratic choice,” Brodhead said.

When that was the case, some Democrats would vote in Republican primaries to have a voice in who was being elected. “They probably do that less now,” Brodhead said, adding Naperville is probably more purple, a mix of red and blue.

Spots where voters consistently vote Republican at the precinct level are located on the east side of Naperville between Chicago Avenue and Hobson Road and between South Washington Street and Plainfield-Naperville Road south of Oswego Road. Other pockets are located north of Book Road in the area near Naperville Presbyterian Church, in the south near Winding Creek Park, and in the area east of McDowell Grove Forest Preserve.

On the other side of the coin, a Naperville precinct in Wheatland Township east of Route 59 near Welch Elementary School has voted Democratic at the congressional level since 2012.

Other areas of Naperville that favor Democrats are located north of Ogden Avenue and on either side of Route 59 and a pocket in the southeast side of the city around and south of Meadow Glens Elementary.

Determining how a person will vote depends on multiple factors, including education, race, gender and socio-economic status, said Suzanne Chod, associate professor of political science and coordinator of gender and women’s studies at North Central College in Naperville.

She said generally the more educated a person is the more likely he or she will vote for a Democrat.

People of color, women, and those who are on the higher end of the socio-economic scale, she said, also are inclined to vote Democratic.

From a political science perspective, it’s no surprise Democratic candidates did well in Naperville.

Chod said voters in suburban communities surrounding large cities tend to be wealthier and more educated. The fact that more people of color are moving into Naperville checks another box off the list.

Kerr said Naperville’s demographics are changing as evidenced by the 800 people who attended a Naperville interfaith service last week in reaction to hate-motivated gun attack during a Jewish Shabbat service in Pittsburgh.

The Jewish congregation was joined by the spiritual leaders of 11 faiths from the area, including Mormons, Hindus, Muslims and Catholics.

“That’s the community we live in now,” Kerr said. “They’re concerned about people besides themselves.”