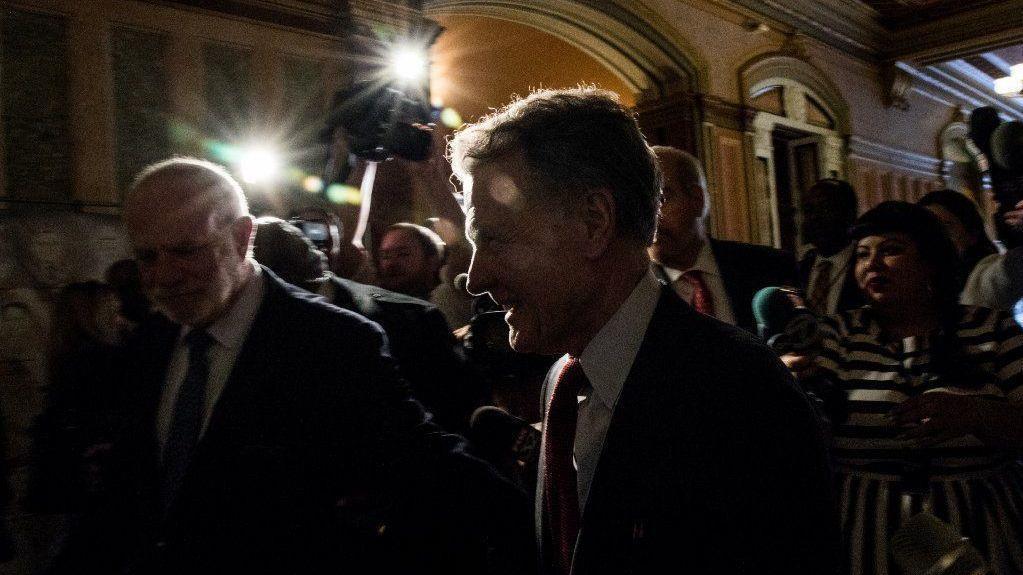 Illinois House Speaker Michael Madigan waited on Tuesday night’s election results to see whether he regained his supermajority, as the Democratic Party he leads was poised to claim total control of state government once again.

Two years ago, then-Republican presidential candidate Donald Trump cost Madigan his veto-proof margin by leading a charge in southern Illinois and other conservative pockets around the state that saw the GOP score a net gain of four seats. But Trump did not fare well in the suburbs, and this time around, Madigan sought to capitalize on that antipathy toward the president by targeting several seats in historically Republican areas like DuPage County and the northwest suburbs.

Madigan-led Democrats dumped an avalanche of negative advertising into races that tied Republican House candidates to unpopular Trump messages, and they portrayed incumbent GOP lawmakers as taking votes that supported wide-open gun rights and hurt women and social programs. In turn, Republicans sought to re-energize their party’s disenchanted voters by warning that complacency risked empowering Madigan even more. Republicans had hoped to gain ground after the speaker pushed through a major state income tax increase in July 2017 and ended a yearslong budget impasse with Gov. Bruce Rauner.

Senate President John Cullerton’s Democratic troops were seeking to expand a 37-22 lead over Republicans, already having one more than the minimum 36 needed for a supermajority. Again the battleground was centered on DuPage County, where a hot congressional race between Republican U.S. Rep. Peter Roskam and Democratic challenger Sean Casten had spurred Democratic hopes for a wave election.

Democratic supermajorities in the House and Senate could be of great help to Democratic governor candidate J.B. Pritzker should he beat Rauner. The billionaire challenger campaigned on a promise to drop the current flat-rate income tax and replace it with a graduated income tax, a sliding scale that would impose higher rates on people with the biggest incomes. Pritzker repeatedly declined to say what the different tax rates should be, calling it something to be negotiated with lawmakers.

But such a major change to the state’s tax structure would require putting the issue on the 2020 ballot for voters to consider. First, lawmakers would need to approve placing a constitutional amendment question before voters by a three-fifths majority. That would require 71 “yes” votes in the House, and Madigan had 67 Democrats headed into Tuesday night, compared with 51 Republicans.

Even when he had 71 House Democrats in 2014, Madigan was unable to persuade enough of them to put on the ballot a constitutional amendment question creating a higher tax on millionaires. A handful of House Democrats bolted on Madigan, and Republicans didn’t vote for the plan.

While a supermajority doesn’t come into play all that often, it does factor in when lawmakers are fighting the governor. A three-fifths vote is necessary from both chambers to override a governor’s veto. That happened last year when Republicans broke ranks with Rauner to vote for the income tax increase. Rauner vetoed it, but Madigan cobbled together a three-fifths supermajority with the help of Republicans to override the governor. The state income tax rate is now 4.95 percent as a result.

The House and Senate races were funded in part by the wealthy governor candidates. Pritzker put in a record $171.5 million of his fortune into his campaign fund, and Madigan-controlled political accounts got $8.1 million of it, while Cullerton-controlled funds got $5 million. Pritzker’s ability to self-fund freed up cash from trial lawyers, unions and other Democrat-aligned interest groups to give to Democratic legislative candidates.

On the Republican side, Rauner transferred $15.4 million to candidates and campaign funds, and $6 million to the House Republican Organization. Senate Republicans got $1.5 million from Chicago hedge fund founder Ken Griffin, $1 million from the Rauner- and Griffin-funded state GOP and $270,000 from conservative businessman Richard Uihlein.

Whatever the outcome Tuesday, Madigan is setting a personal milestone with his own election from his Southwest Side district, where he was unopposed. The nation’s longest-serving speaker, who has held the top House post for all but two years since 1983, will begin his 49th and 50th years in the legislature during the new two-year term that starts in January.The biggest supermajority Madigan oversaw was 72-46 in 1991-92, and the speaker would need a net gain of five seats to equal that record.

In the House, the contentious suburban contests found Republican incumbents trying to hold on:

— In DuPage County, Republican Rep. Peter Breen of Lombard was up against Democrat Terra Costa Howard of Glen Ellyn in a contest that abortion rights group Personal PAC spent heavily in. Breen is a major abortion rights opponent at the Capitol, and he’s gotten backing from Dan Proft, a conservative radio show host and failed governor candidate.

Among other DuPage races, Amy Grant, a Republican DuPage County Board member from Wheaton, is vying to fill the seat given up by Rep. Jeanne Ives, a Wheaton Republican who unsuccessfully challenged Rauner in the March governor primary. Grant faces Kathleen Carrier, a Carol Stream Democrat who is the former chair of the Wayne Township Democratic Party.

DuPage County Board member Tonia Khouri, an Aurora Republican who lost a 2016 congressional bid, ran against Democrat Karina Villa, vice president of the West Chicago school board. The seat is held by retiring Republican Mike Fortner of West Chicago.

— In the north and northwest suburbs, Republican Rep. Tom Morrison of Palatine was trying to fend off a challenge from Democrat Maggie Trevor of Rolling Meadows. Morrison faced criticism for submitting a letter of support for a Christian pastor who was convicted on charges he spanked children in Arizona.

— In other key collar county and Downstate races, Rep. Mark Batinick, a Plainfield Republican who faced a barrage of negative television ads, fought to hang on against Democratic opponent Mica Freeman, also of Plainfield.

Republican Rep. Jerry Lee Long of Streator was in a tough battle following what the House GOP said were complaints of abusive behavior involving staffers. He faced Democratic engineer Lance Yednock of Ottawa.

In a major showdown in deep southern Illinois, appointed incumbent Democratic Rep. Natalie Phelps Finnie of Elizabethtown was battling Republican Massac County State’s Attorney Patrick Windhorst of Metropolis. Finnie was trying hang on to the Phelps family’s long legacy of holding the House seat. She is the daughter of former state Rep. David Phelps, who later served in the U.S. House, and the cousin of former Rep. Brandon Phelps, who gave up the seat in 2017 after about 14 years and now works as a lobbyist.

In Macomb, Republican Rep. Norine Hammond was in a rematch with Democrat John Curtis, a vegetable farmer. In another rematch, Democratic Rep. Katie Stuart of Edwardsville was battling former Republican Rep. Dwight Kay of Glen Carbon.

Democratic Sen. Tom Cullerton of Villa Park was seeking to win a rematch against Republican Seth Lewis, an insurance agent from Bartlett.

In the Quad Cities, Republican Sen. Neil Anderson of Andalusia was trying to hold off Democratic challenger Gregg Johnson, a retired Illinois Department of Corrections supply supervisor from East Moline.

5 things to know about Election Day in Illinois »