J.B. Pritzker won a resounding victory by outspending Gov. Bruce Rauner at every turn, downplaying ethical questions and racial tensions in his campaign, and presenting a clear alternative to Rauner’s failed incumbency.

In a number of areas he took positions that were more progressive than the Democratic mainstream. But getting results on those promises will take lots of work on his part and even more organizing by activists.

One key issue separated the two candidates: Pritzker was elected on a clear platform of implementing a progressive income tax, with higher rates for wealthier taxpayers. That’s an absolute necessity if Illinois is to get it’s fiscal house in order, meet its constitutional duty to fund schools adequately, and rebuild a safety net that Rauner decimated.

A progressive income tax requires amending the state constitution, which takes a three-fifths vote in the legislature and ratification by voters in a general election. Both of those steps are likely to get strong pushback from big-money conservatives and will require grassroots education and pressure – although a recent poll showed 71 percent of Illinois residents support a graduated income tax.

If an amendment does pass, the next question is how to structure the tax. Pritzker hasn’t discussed tax rates, but two proposals have been floated in recent years. A plan by the Center for Tax and Budget Accountability would raise rates for earners over $300,000 a year and reduce them for everyone else, bringing in an additional $2 billion a year.

A measure introduced a couple of years ago by State Rep. Robert Martwick (19th) would replicate the graduated tax schedule of Wisconsin. That would mean an income tax hike for most people, but would generate over $5 billion, allowing the state to become the primary funder of K-12 education – and that would provide property tax relief that would offset middle-class income tax increases by a wide margin, according to Martwick.

Pritzker has said he doesn’t support Martwick’s plan, but the CTBA framework would still leave a big revenue gap. That includes a growing bill backlog, now approaching $10 billion, as well as growing pension debt. CTBA advocates expanding the sales tax to include some services and taxing retirement income over $50,000, both worthy proposals, both done in many other states. That would raise a few billion dollars more. Pritzker has shied away from both ideas.

Another significant revenue option involves closing billions of dollars of corporate loopholes that do nothing to boost the economy. Pritzker is probably familiar with one of them: offshore tax havens, which cost the state nearly $2 billion a year. The Tribune reported that leaked offshore financial records show that the governor-elect is part owner of several shell companies registered in low-tax Caribbean nations where their assets are shielded from U.S. taxation. Pritzker said offshore trusts in his name “are only providing charitable contributions,” but he also refused to release his full income tax return so that assertion can’t be checked.

Fair Economy Illinois has targeted corporate profits held off-shore, saying Illinois could recoup over $300 million by following the lead of other states in taxing foreign dividends like other income. Closing other corporate loopholes identified by the group could raise hundreds of millions of dollars more in revenue. 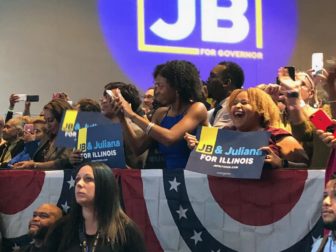 Pritzker has backed legalization of recreational marijuana, saying taxing its sale could bring in $350 million a year and perhaps much more. It would also reduce costs to the criminal justice system, not to mention the costs to individuals, families, and communities of unnecessary incarceration.

Those are all reasons to go beyond marijuana legalization andend the ill-fated war on drugs, which has been “a colossal failure with tragic results,” as the Drug Policy Alliance recently noted. Those results include overcrowded prisons, police corruption, exacerbated health problems, and poverty and economic marginalization – a “New Jim Crow,” with the war targeting people of color.

The Illinois Department of Corrections spends over $300 million a year incarcerating people for drug offenses, and that doesn’t include the costs to law enforcement agencies and courts.

Addressing that should be part of the broader criminal justice reform effort that Rauner launched and then largely abandoned. He named a commission to find ways to reduce the state’s prison population by 25 percent, and then followed up on few of its recommendations.

It’s a tough haul politically; even winning legislative approval of marijuana legalization, which is heavily supported in public opinion polls, is expected to be challenging.

Pritzker has said he’ll name Lt. Gov. Juliana Stratton to head a new Office of Criminal Justice Reform and Economic Opportunity. Stratton has a strong policy background in this area – she headed Cook County’s Justice Advisory Council as well as the Center for Public Safety and Justice at the University of Illinois at Chicago – and reform advocates I spoke with have a lot of faith in her. Once again, educating and organizing from below will be key to winning progress.

Pritzker also endorsed lifting the state ban on rent control. Contrary to the myths propagated by the real estate industry, modern rent stabilization has been effective in many big cities. Given the massive scale of the housing crisis in Chicago and elsewhere in the state, rent control is a solution that will preserve far more affordable housing than any program subsidizing developers can accomplish.

Rent control advocates have already gone beyond “lifting the ban” and are pushing legislation to establish elected rent control boards throughout the state.

The opposition is powerful and influential within both parties. But the organizing is underway, most recently seen in the turnout for four hearings by the State Senate’s Special Committee on Housing, chaired by Sen. Mattie Hunter, who is sponsoring the new legislation.

Pritzker’s election and Democratic majorities in Springfield present an opportunity for progressives to move from the defensive to the offensive – but activists know that they can’t rely on politicians to get the job done.