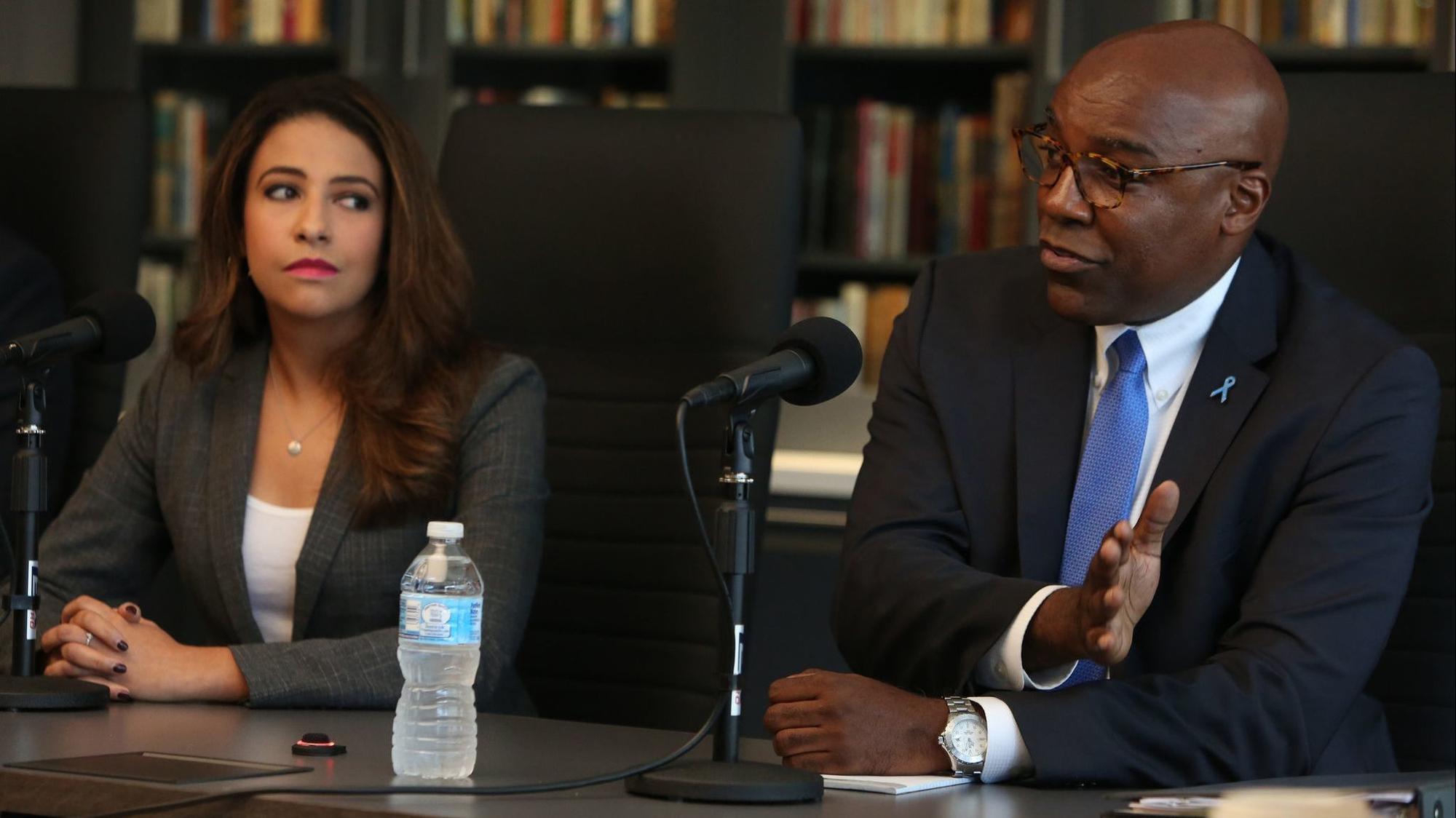 Raoul, an African-American state senator from Chicago, also is seeking to benefit from a late radio ad cut by the predecessor of his Springfield seat: former President Barack Obama, who also will appear at a Sunday rally for the Democratic ticket at the University of Illinois-Chicago.

At the same time, Harold, an Urbana attorney, had failed to purchase any advance TV advertising time in the Chicago market for the race’s final weekend — an unusual move for a prominent statewide candidate. Given the timing required for purchasing political advertising, she at best may only have a limited showing in Chicago.

The attorney general’s campaign has evolved into the most contested statewide race outside the highly visible contest for governor between incumbent Republican Bruce Rauner and Democrat J.B. Pritzker.

Raoul and Harold are vying for the seat being given up after four terms by Democratic Attorney General Lisa Madigan, the daughter of Rauner nemesis House Speaker Michael Madigan.

One prominent Democrat said a recent tracking poll of the race showed it to be close with a large number of undecided African-American voters. Harold also is African American, though black voters are a core Democratic constituency and the Obama ad and visit could assist in turnout for Raoul and the rest of the Democratic ticket.

Overall, Raoul has out-raised Harold, reeling in nearly $11 million compared to her $5.4 million. Raoul, though, faced an eight-way March primary while Harold had a nominal opponent in the GOP contest

Raoul has outraised Harold 10-to-1 over the campaign’s final days.

From Oct. 23 through Friday, Raoul has taken in more than $1.3 million in cash and assistance for his campaign. Oct. 23 marked two weeks out from the Nov. 6 election. The donations to Raoul included nearly $445,000 worth of phone banking assistance plus another $55,400 in cash from the Democratic Party of Illinois, $103,867 worth of mailings from the abortion-rights advocacy group Personal PAC, $200,000 from the Laborers’ union and $50,000 from the Teamsters union.

Over that same home stretch of the campaign, Harold reported taking in $136,150. Of Harold’s overall haul of $5.4 million, $3.5 million — or 64 percent — has come from Rauner and Rauner ally Ken Griffin, the founder of Citadel. Rauner has contributed $1.8 million while Griffin has given $1.7 million.

Raoul’s late assistance has included stumping from other fellow Democrats seeking to boost his support.

Earlier this week, Chris Kennedy, who was defeated in the Democratic primary for governor, sent an email to his supporters urging a vote for Raoul. At a Friday morning news conference, members of the Democratic ticket touted Raoul and criticized Harold.

“Look, I’ve been extremely vocal about the need to elect more women to office,” said state Comptroller Susana Mendoza. “But we need to elect women who are actually for women and who will stand up to protect women’s rights. That is not Erika Harold.”

Raoul allies acknowledged privately that the contest would likely be among the closest of statewide races on the ballot though they dismissed concerns that their candidate could be in danger. Internal polling, though, has shown that Raoul has consistently trailed behind the larger leads held by other Democrats seeking statewide office, particularly Pritzker, party operatives said.

Raoul said Friday that while Obama endorsed his candidacy in August, he wished he had the radio advertisement sooner.

In an effort to appeal to a larger group of voters, Raoul also has sought to shift the closing campaign debate to the issue of healthcare and off the subject of Harold’s personal opposition to abortion rights. Harold, as a congressional candidate in 2014, told the News-Gazette in Champaign that she did not believe the Affordable Care Act could be fixed and that Congress should “repeal it all.”

“It’s important that we are not bamboozled by the rhetoric,” Raoul said.

During a forum earlier this week on WTTW Ch.-11, Harold said she would not join other attorneys general on either side of the issue over federal litigation backed by Republicans seeking to block Obamacare.

“This is the sort of way you politicize the office,” Harold said, calling it “fundamentally a federal congressional issue.” Lisa Madigan has joined with Democratic attorneys general to defend the Affordable Care Act, a move Raoul said he supports.