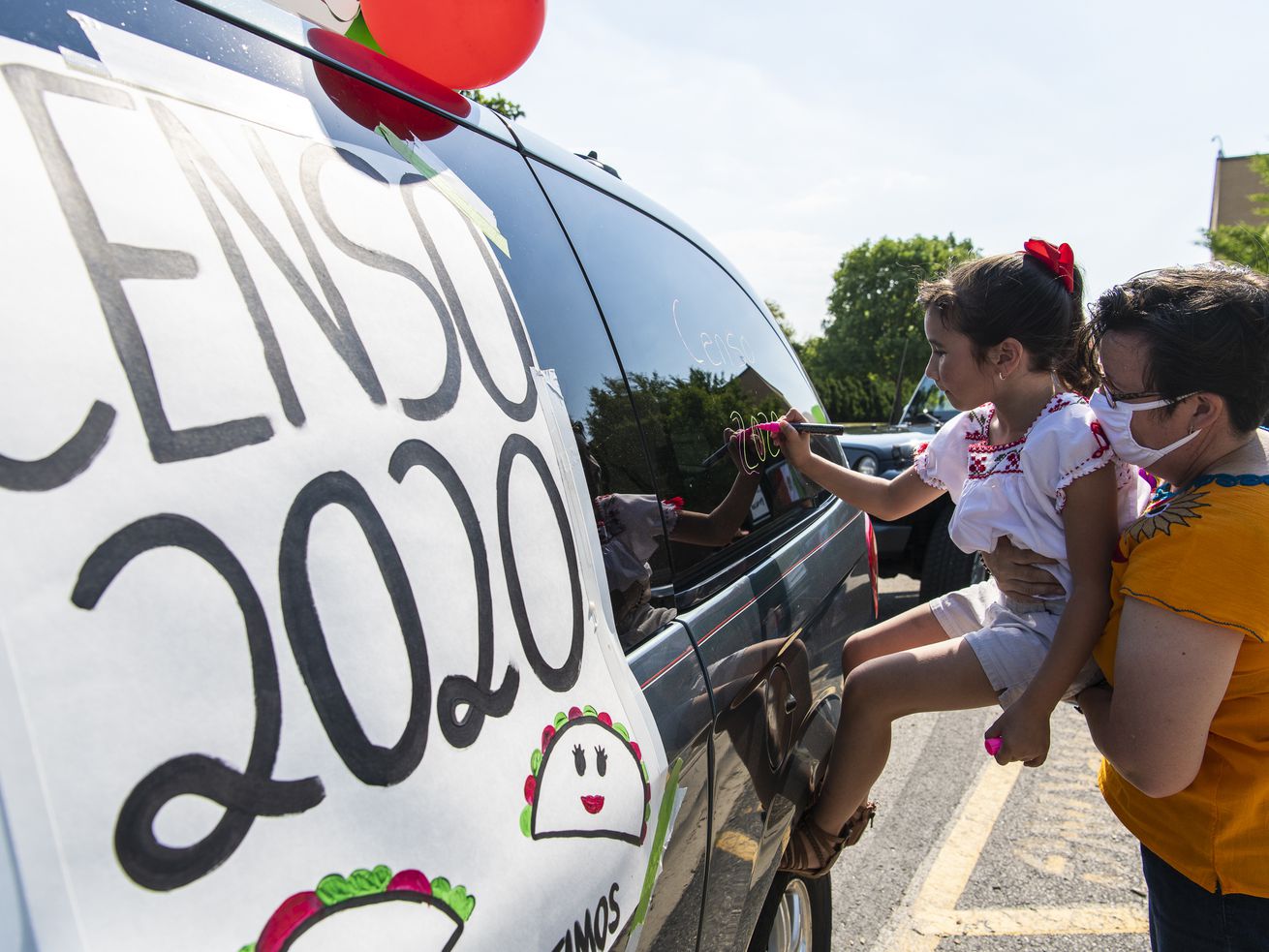 Census outreach efforts in June included Fernanda Hernandez (left) and Margarita Marquez decorating their van before driving it through Little Village to remind people to fill out the 2020 census. | Tyler LaRiviere/Sun-Times

The court ruling that forced the U.S. Census Bureau to continue counting people across the country through Oct. 31 came as a relief to many.

It meant that, despite a global pandemic severely altering how the tally is conducted, cities and towns would have more time to include more people in a tally that will determine funding and political representation for the next 10 years.

But in Illinois, the extension was somewhat bittersweet.

As of Oct. 1, funding from the state, county and city for community organizations doing census outreach stopped; without that financial support from local government, many will have to cease census events or severely scale them back.

Since January, the Illinois Coalition for Immigration and Refugee Rights has used state funding to support 67 smaller groups in Chicago, suburban Cook County and collar counties focusing on hard-to-count areas. It was among 30 community groups and government organizations statewide receiving such funding.

The nonprofit’s funding officially ended Oct. 1 but it was allowed to use unspent money, which ran out four days later.

“While some of our partners will continue to incorporate the census into their regular outreach work for voter registration and benefits assistance, our contract with the state will be ending,” said Maria Fitzsimmons, census director for the coalition. . “Over the course of the last couple months the uncertainty around deadlines and the ongoing legal battle over the final deadline have made our work increasingly challenging.”

The coronavirus pandemic delayed by more than two months the U.S. Census Bureau’s timeline to deploy census takers to reach non-respondent households. As a result, the bureau pushed its deadline to Oct. 31.

The National Urban League took issue, filing a federal lawsuit in California against Secretary of Commerce Wilbur Ross; the Census Bureau is part of the Department of Commerce.

The judge in that case issued a preliminary injunction requiring the bureau to keep counting through Oct. 31. Ross appealed, but lost.

Now, the Trump administration has taken the case to Supreme Court, arguing the bureau must end the 2020 census count soon, to meet the Dec. 31 deadline to report census results for apportionment counts; those numbers are used to redraw state and federal legislative districts.

Eddy Borrayo, president and CEO of Rincon Family Services, said the state did everything it could to help with the count, but the back-and-forth over the census deadline put everyone working in census outreach in a bad place.

The uncertainty of the constantly changing deadline made it difficult for the state to assure the funding would be available through Oct. 31, Borrayo said.

Rincon Family Services’ census outreach also was funded by the state and its money also ran out in the first week of October, affecting outreach work in the final weeks.

“We won’t be able to do our large five-hour parties on a street corner with food and a mariachi band, but we will still be out there making sure people are counted,” Borrayo said.

“This is a call to action, at least for me, because we have so much at stake because the census determines how much funding we get for carrying out our essential duties in the community,” Borrayo said.

“Our community simply is not opening the door to census workers because they don’t trust the federal government, quite understandably,” he added. “But they are opening their doors and discussing the census with us because we are a well-known name here.”

Borrayo hopes to improve Chicago’s dismal response rate as it works through hard-to-count neighborhoods on the Northwest Side.

Jordan Troy, a Lightfoot spokeswoman, said its funding for organizations also ended in mid-August, but it remains committed to getting people counted. This includes “heavy street outreach by activating 200 Safe Passage workers” and extending its phone-banking program with Chicago Cares.

“In this last month, the city will continue to engage residents through a variety of methods including sending the city’s ‘Census Van’ to communities with the lowest response rates and coordinating with the U.S. Census Bureau to attend events at food pantries, grocery stores and more,” Troy said.

“The City’s Census PSA Campaign will still be showcased on city assets and in targeted media buys throughout the month.”

Sheryl Holman, CEO of Community Assistance Programs, said they hope the state steps in to fund them through Oct. 31.

“We are very excited to have an opportunity to continue our pursuit of individuals residing in the predominantly Black communities that have not responded to the census,” said Holman. “Understanding that the Black community has historically been undercounted and underfunded largely due to this undercount, we take this charge very seriously.”

“We know that the state is committed to secure a complete count and we are doing everything in our power to get an accurate and complete count.”