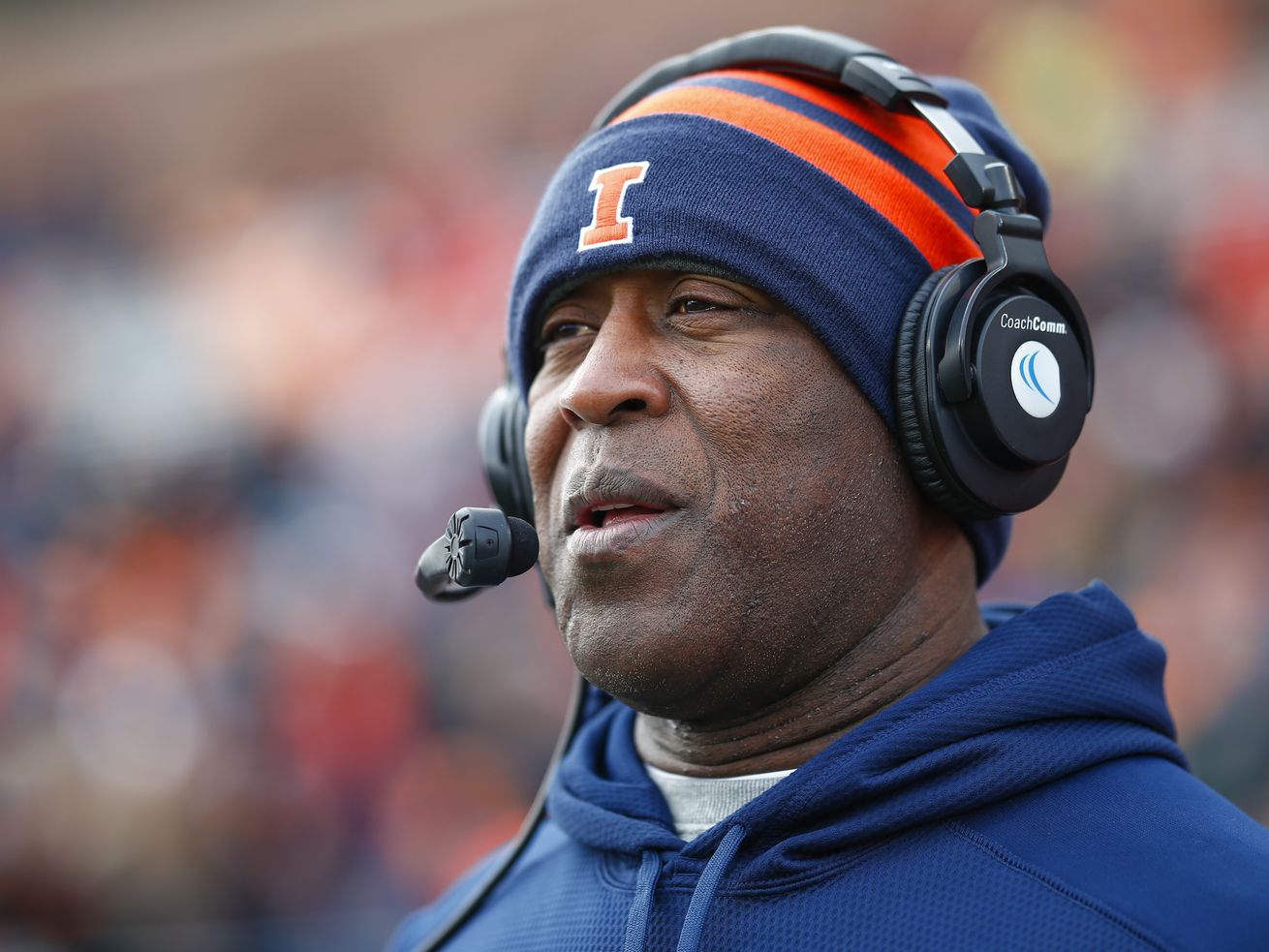 At the top of Lovie Smith’s game plan: make sure Illini players register to vote. | Photo by Michael Hickey/Getty Images

As the 1976 presidential election neared, Smith, then a freshman at Tulsa, didn’t think much about voting. He’s making sure his players are more tuned in than he was.

Forty-four years ago, Americans faced the first presidential election since the resignation of Richard Nixon. Would it be incumbent Republican Gerald Ford or Southern Democrat Jimmy Carter?

At the University of Tulsa, a freshman linebacker named Lovie Smith didn’t really have a dog in the fight.

It was an interesting time, the nation still celebrating its bicentennial anniversary. Black History Month had been nationally recognized for the first time in 1976, too. And only a year before — the aftermath of the Vietnam War still thick in the air — the requirement of 18- to 25-year-old males to register for Selective Service had been suspended.

But Smith was 18. He was a football player. Like a lot of his peers, he hadn’t really given a lot of thought to voting.

“That was a long time ago,” Illinois’ fifth-year coach, now 62, said. “I was not as engaged as our athletes are now. …

Generally speaking, it’s never too late to engage in the political process, to delve into the issues of the day, to try to see a broader, fuller, more nuanced picture of a community, a country, a world. It happens at different times for different people. Some never get there.

Smith got there eventually. The young men who play for him are coming of age at a time of bitter division on political and other fronts, all of it amplified by social media. They’re getting there, too — in part because their coach insists on it.

If you’re going to play for Smith in 2020, you’d better be registered to vote.

“If we talk about social justice, what’s happening in our world, I want our guys to be involved in it,” he said. “The best way to be involved, where you can really make a difference, is at the ballot box, by voting. So it’s kind of as simple as that.

“It’s a right. You know, there were a lot of people who really fought hard for some of us to have a right to vote, so it would be a shame not to use that. It’s not like we had to twist their arms. Our guys are involved. It seems like young people today, more young people, are involved in the process as much as ever before.”

In a video on Illinois’ athletics website, Smith encourages early voting, voting by mail, whatever works. After practice Tuesday — two and a half weeks ahead of the season opener at Wisconsin, and four weeks before the general election — he assured that his players will be informed voters and that they’ll be encouraged to make their own choices among candidates.

“When [election] day comes,” he said, “we’ll be out in force if the guys haven’t already voted.”

That’s a victory in itself.

• The list of things the NCAA has done right isn’t long, but here’s one: It mandated that Tuesday, Nov. 3 will be a day with no required athletic activities at any member school. This was met with thumbs-up at Illinois, at Northwestern and anywhere else young people voting is considered a good thing. In other words, at any school with a conscience.

“All our Wildcats can be leaders in the way they use their right to vote,” Northwestern athletic director Jim Phillips said in a statement, “and in how they model civic responsibility for their peers.”

A lot of older citizens could learn a thing or two from them, too.

• You’ve got to hand it to Jimmy Butler as he carries the Heat as far as they can possibly go despite injuries to his teammates and, oh, yeah, the Lebron James-led Lakers blocking his title path. No doubt, John Paxson and Gar Forman underestimated Butler when they gave up on him in 2017.

But let’s not pretend the chasm between the Heat and the Bulls isn’t a gaping one even with Butler set aside. There’s no Bam Adebayo on the Bulls’ roster. There’s no one who can shoot, handle and glide effortlessly — at 20 years old — like Tyler Herro. There’s no been-there-done-that, lighthouse-in-the-storm type like Andre Iguodala.

Butler is terrific. So are his teammates. So is his coach, Erik Spoelstra. So is Pat Riley at the top of it all.

• I can’t be the only one who watched the Bears offense twist itself into a stale pretzel Sunday against the Colts and thought, Man, this is just like being at Wrigley Field.

Speaking of which, any chance Nick Foles can hit a fastball?

• Your Thursday-night score: Buccaneers 27, Bears 16. And print it.

Look, what do you want from me? It’s simple math: Tom Brady divided by Foles equals yeah, yeah, I know who won the Super Bowl a few seasons back.